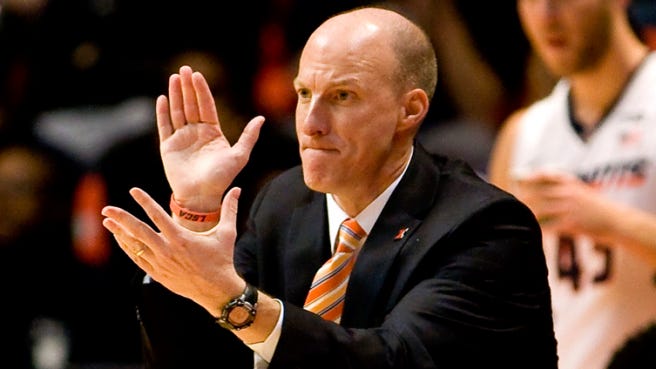 There are programs that should be good year in and year out – at the minimum these programs should be competitive and not a constant after thought. I’m talking about Illinois, Texas, USC, Georgetown, Maryland and Washington just to name a few. There’s no reason for these teams to not be competitive. They have resources, recruiting in their local area is top notch and they have history whether it’s NBA guys or a name brand.

Really, I want to focus on Illinois, who has completely fallen off the face of the Earth. We’re 12 years removed from them losing in the national title game with a 37-2 record and seemingly looking like they are going to be a mainstay in the top-25. Since that 2004-05 year, Illinois hasn’t made it past the Round of 32 and only have three NCAA Tournament wins. That’s completely inexcusable for a program like Illinois.

What happened with Illinois though is pretty simple. It comes down to two major things. The first being the lack of recruiting and complete misses over the last decade. Most recently it was Jalen Brunson, who hails from Chicago and had Illinois second to Villanova – something that’s all too common recently. But, what started it all was the Eric Gordon fiasco. Gordon was verbally committed to Illinois and Bruce Weber before Indiana hired Kelvin Sampson and almost immediately Gordon switched his commitment to Indiana. At the same time there was hope that there would be a packaged deal with Gordon and Derrick Rose to Illinois. Rose played on the same AAU program as Gordon, they were great friends and Rose visited Illinois. We obviously know where Rose ended up.

Finally there was Cliff Alexander, which may have summed up Illinois basketball perfectly. Alexander, from Chicago and the No. 2 overall recruit in 2014. He never really tipped his hand about where he was going and then had what had to be the most brutal commitment ceremony for Illinois fans. Alexander picked up the Illinois hat, faked everyone out, put it down and ultimately put on the Kansas hat. It led to reactions like this:

The other major thing has been missing in the coaching search. Bill Self was at Illinois for only three years before leaving for Kansas – and rightfully so. But, that threw a wrinkle on the everything. Illinois hired Self fully expecting him to be there longer than those three years and that ultimately changed the entire history of Illinois. You can blame North Carolina and Roy Williams for that one. Bruce Weber then had a wildly successful first three years with a Sweet 16, runner up and round of 32 finish. He averaged 29 wins per season and never had a record worse than 26-7 during those three years. Many people will ultimately say that was because he had Self’s guys and could never get it done on his own. While that’s true to a degree, you still have to coach those guys to win games. However, Weber flamed out pretty quick after that never winning more than 24 games again the next six seasons. It was completely fine for Illinois to move on from Weber. I firmly believe if you’ve reached the peak as a program with a coach, go ahead and move on *cough, cough, Tom Crean and Indiana, cough.*

Illinois brought in John Groce, who was coming off of success at Ohio University. He had reached a Sweet 16 and had a 60% winning percentage at Ohio. It was a pretty bad year in terms of coaches who were available that offseason opposed to a year later, but the names who switched at the same time as Groce were Danny Manning, Frank Martin, Tim Miles, Johnny Jones and Keno Davis. Not exactly breaking the bank for any of those except maybe Martin. A year later? Chris Collins got hired at Northwestern – you’re telling me Illinois wouldn’t have taken Collins?

Groce has had some bad luck with injuries and suspensions as his main guys have never really gotten on the floor at the same time. On top of that he’s only kept 50% of the top-10 talent in the state at Illinois – something that needs to be changed. They can’t let all the top talent out of the state.

Now on the flip side part of the reason to keep Groce is the fact he has one of the best recruiting classes in the B1G coming in next season. He’s well-liked outside of the court, to where he’s always willing to talk to fans and do the rounds with the media. He’s not a stuffed up guy or anything like that and that has gone a long way in recruiting.

Groce also has the fact that Josh Whitman, the Athletic Director, is fairly new. He’s been on campus for just one of the years that Groce has been there. He’s given Groce the vote of confidence, which typically is a kiss of death in most situations.

Now if I’m Whitman, I make the call to Fred Hoiberg and see if he has any interest this offseason. Hoiberg can recruit, especially when it comes to juco and transfers. He’s also quite local right now and in a pretty shitty situation with the Bulls (sorry, Big Cat). You need someone like that to reinvigorate the program and get people excited. When it comes down to it Illinois isn’t a top-tier school, but it has top-tier possibilities. You just need the right fit. You’re not going to get the sexiest name out there, especially if schools like Indiana and Ohio State become open. But, you can get a guy like Hoiberg.

The fact is Illinois missed on some serious recruiting battles over the last decade and it ultimately cost them in the long run. Kids now are now too familiar with Luther Head, Roger Williams and Dee Brown. Deron Williams is past his prime and there’s not that Illinois guy in the NBA to really hang your hat on. If you can get a couple wins and back to the Sweet 16 in the next 3-5 years, those names become familiar again. The question is does Whitman avoid past history with Illinois?