So being one of the preeminent sources on the very public persona of the viral 13-year-old Cash Me Ousside girl Danielle Bregoli, I felt like I had to do something special to document her much hyped return to Dr Phil. Live tweeting a show while people are at work is a bad idea so I’m taking an old Bill Simmons staple and doing it as a running diary.

3:05 we have kicked off with a recap of the fact that Cash Me Ousside girl’s mom Barbara Ann is actually trying to get her help she needs…by getting her a pony so she learns about responsibility. Shocking this approach hasn’t worked yet, young girls always view being given a pony by their parent as a real wakeup call to turn their lives around.

3:08 A scene of the very 13 years old Cash Me Ousside girl in a tanktop in bed has made me very uncomfortable. The less said the better: 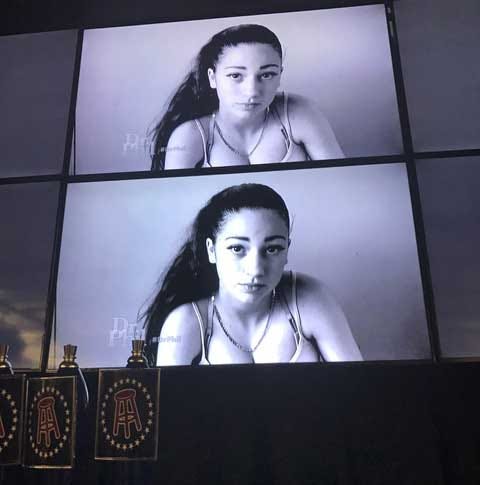 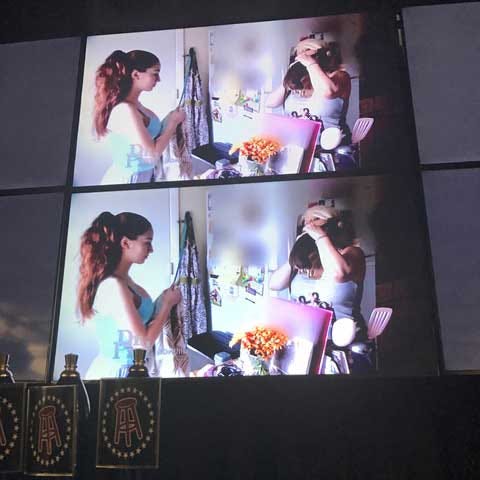 3:09 Cash Me Ousside’s mom says she did in fact get her an agent but she won’t talk about it. This absolutely makes her look like an even worse mom taking advantage of her kid but she’s dead on, this little chick has THREE FUCKING MILLION FOLLOWERS, if she’s not finding some way to get lightly paid off this she’s an idiot. That’s borderline neglect with the absurd amount of fame she’s racked up so fast.

3:13 Dr Phil says the mom now “has more help” than she’s ever had because even though she’s got fur coats and bought this little psychopath a horse, a nanny or a therapist may have been a bit too costly of a purchase. Totally makes sense. 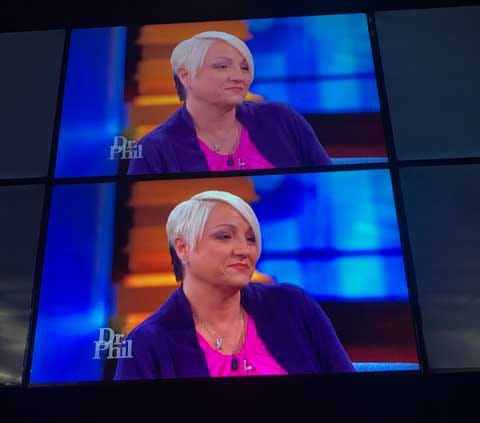 This skunk ass disaster is not what I would expect to see given the physical attributes of our young white trash heroine, just need to throw that out there.

3:20 If you’re a parent and you bust out this wide variety of excuses for why the mom can’t control Danielle is hilarious: 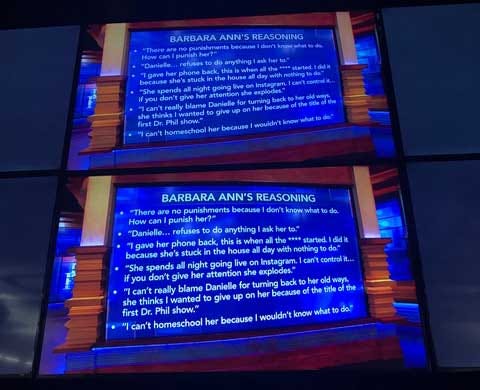 3:21 Apparently Barbara Ann was trying to get Cash Me Ousside girl taken into custody because she simply could have handled her. She feels as though this does not make her a bad mom. The very fabric of parenting is being torn apart before my eyes and I’ve never felt so alive. This must be what the scientists who created the ooze in Ninja Turtles when they found out they turned chemical experimentation into a man-made pet store military.

3:23 This dude wandered onto the set to say they got a record number of letters critiquing her parenting and this dude immediately got berated by Barbara Ann. His face says it all: 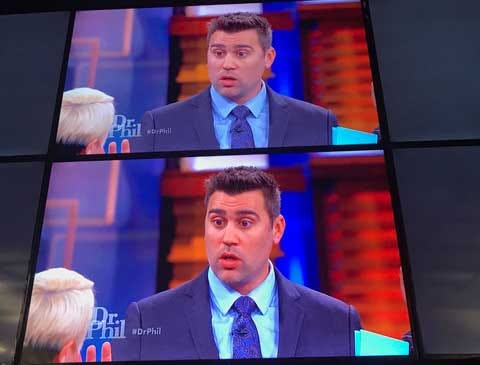 3:25 Barbara Ann just actually said “I’m the mama bear. If you come after my cub, I’m coming after you.” A common bear trait, much like giving your cub away to the state in the hopes they can fix your child so you can focus more on grooming yourself to look like Pepe Le Pew.

3:30 Apparently things have taken a turn for the worse and now we’re finally getting to our star, Cash Me Ousside girl live from the family ranch. When asked what she wants to tell Dr Phil, here’s a multiple choice quiz on what she said:

A) “I’m sorry”
B) She had a heartfelt monologue about wanting to change and improve and get her life back on the right track
C) “Alas poor Yorick, I knew him well”
D) “Same thing as lass time, I wanna tell him to suck my dick.”

3:31 Cash Me Ousside has been introduced and it’s an empty studio because this is no joke to Dr Phil: 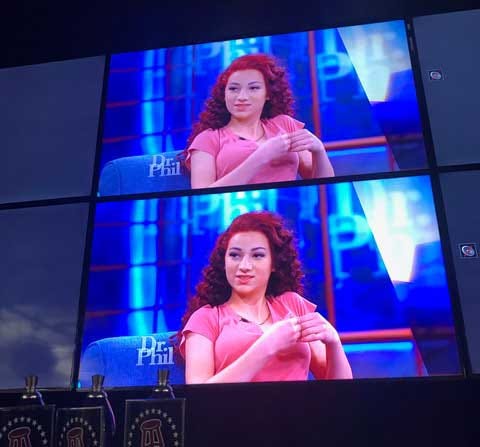 They’re treating her like a wild animal at best and Hannibal Lecter at worst. Quite the rep for a 13-year-old, almost have to respect it.

3:36 We come back from commercial Cash Me Ousside wants to be a nurse. Ignoring the fact I would not trust my burrito with her let alone my life, it could be a good move. At least this way she can treat her own wounds when challenging people to fights in the ER, cuts out a middleman.

3:37 Apparently Cash Me Ousside was on an “Instagram shoot” for something called “Pizza slime” and I may be with Barbara Ann now, this is all too much to keep track of, too much weirdness raising a 13-year-old these days. Just give her away to the state and let’s try again with a new fetus.

3:43 I admit I haven’t watched a ton of Dr Phil episodes start to end but it really seems like he’s actually using whatever brainpower he has in his fake doctor head to try to help Barbara Ann stop raising a human Tasmanian devil with tits. He’s even breaking out the ol Mirriam Webster: 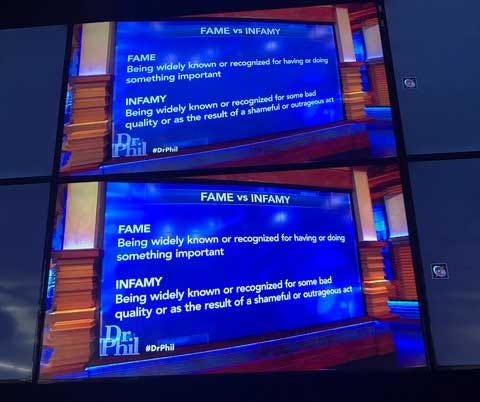 3:45 So full disclosure I’m watching this at our office with all of the various noise we’ve come to expect that makes blogging here such a treat and I’m missing a few beats. Namely I have ZERO fucking clue who this lone dude in the audience is who apparently speaks to Cash Me Ousside like Dr Doolittle: 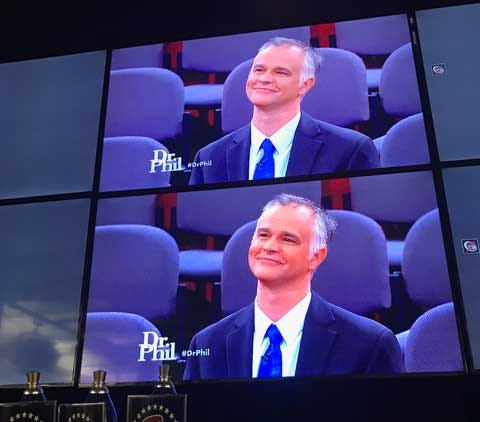 I assume he’s some sort of court-appointed guardian or therapist or maybe a horse guy or possibly an angel, I almost don’t want to know what he actually means to her at this point but it’s a key plot point I missed, you deserve to know that.

3:48 All of a sudden the studio audience is back and Dr Phil is talking about some chick’s Valentine’s Day disasters? 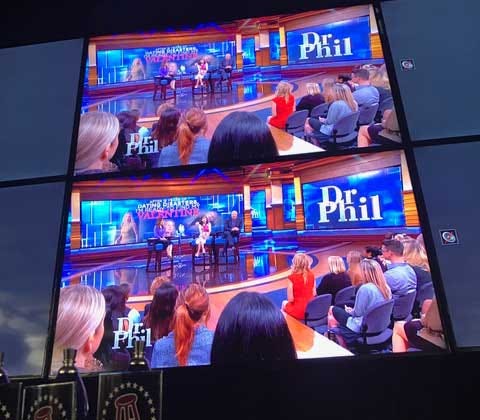 What kind of shit is this? Is he fucking with me because Swipe Drunk Love is eating his lunch in the dating advice game? That must be it. Very gross of Dr Phil to use my genuine interest in Cash Me Ousside girl getting hope against me to promote his other inferior episode wares.

3:57 I just watched 10 extra minutes of this bullshit and the audience got some face care products from Dr Phil’s wife and some jewelry. What bullshit. 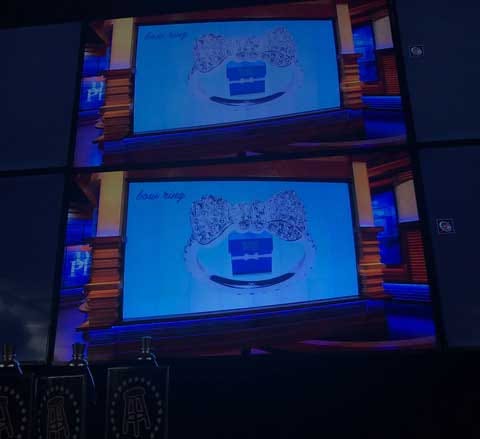 So they teased the shit out of Cash Me Ousside girl and gave us like 10 min total of her. Dr Phil, you sir are a cunt.

3:58 Oh and there’s one bonus update on Cash Me Ousside at the end…apparently her now-famous Spirit Airlines altercation came on the way back from this Dr Phil taping. So the treatment was a success!

Whirlwind week as an adult man blogging the comings and goings for a possibly insane 13-year-old girl. Thanks for joining the wild ride.