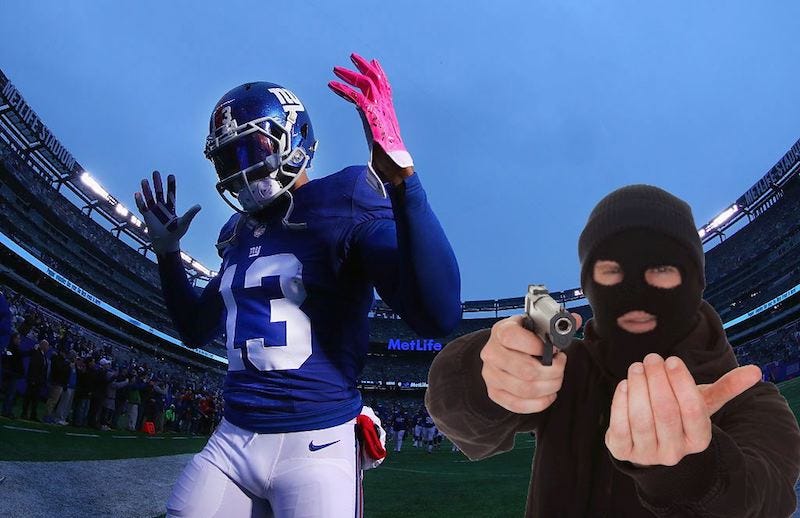 Page Six- Tom Brady wasn’t the only NFL star to get hit by thieves over Super Bowl weekend in Houston. Sources exclusively tell Page Six that Giants star Odell Beckham Jr.’s gear was also taken. Brady’s game-winning jersey, which was swiped from the Patriots’ locker room at NRG Stadium, is still in the wind. But a source told us that Beckham — in town for the big game as an ESPN pregame commentator — was robbed of “jewelry and cash.” Rumors even swirled that he was mugged. “It was basically catching him outside at the right time,” said a source of the alleged heist.

A source close to the Giants confirmed that the star wide receiver was indeed robbed, but he said it was not a mugging at all and nothing “pricey” was taken. The team source explained that Beckham was staying at a hotel in Houston, but that he also left a bag of his belongings at a friend’s house. (As one does?)

God dammit, our boy Odell keeps catching L’s this year. One step forward, two steps back. That was basically this entire season for ODB. He again put up numbers, but there was also a bunch of nonsense. The whole kicking net saga had the media losing its motherfucking MIND. People had been chirping how Odell could make great catches but not lead his team to the playoffs like a receiver can easily do that in a game like football. Then the Giants make the playoffs and that narrative gets murdered. But then Odell goes on a boat in Miami on an off day, plays like dog shit in Lambeau, and punches a hole in the locker room wall, so now the anti-Odell losers have a bunch of new ammunition.

Which is why I am sure the haters will somehow go overboard with analysis on this one. Armchair quarterbacks will be saying how Odell shouldn’t carry personal belongings out with him in public or change his haircut so he’s not an obvious target or never ever leave the house again. But the solution is actually pretty simple. Odell should hire Charles Oakley as his bodyguard. Dude is a one man gang, probably the most popular human in New York right now, and from what I hear, an absolutely delightful chef. Can you imagine Odell and Oak just cruising around the world? Greatest buddy comedy ever. Oakley bitch slapping fools to death and Odell doing some crazy ass dance over their lifeless corpse. You think the Carolina Panthers talk shit and carry those bats toward Odell two seasons ago if Big Bad Oak was scowling on the Giants sideline? Fuck no. And if Madison Square Garden ever wants the best athlete in the city to grace Celebrity Row again, they will have to let in his bodyguard that somehow became a pariah at The Garden. This is a complete win/win situation for all sides involved (except for James Dolan obviously, which makes me like it even more).