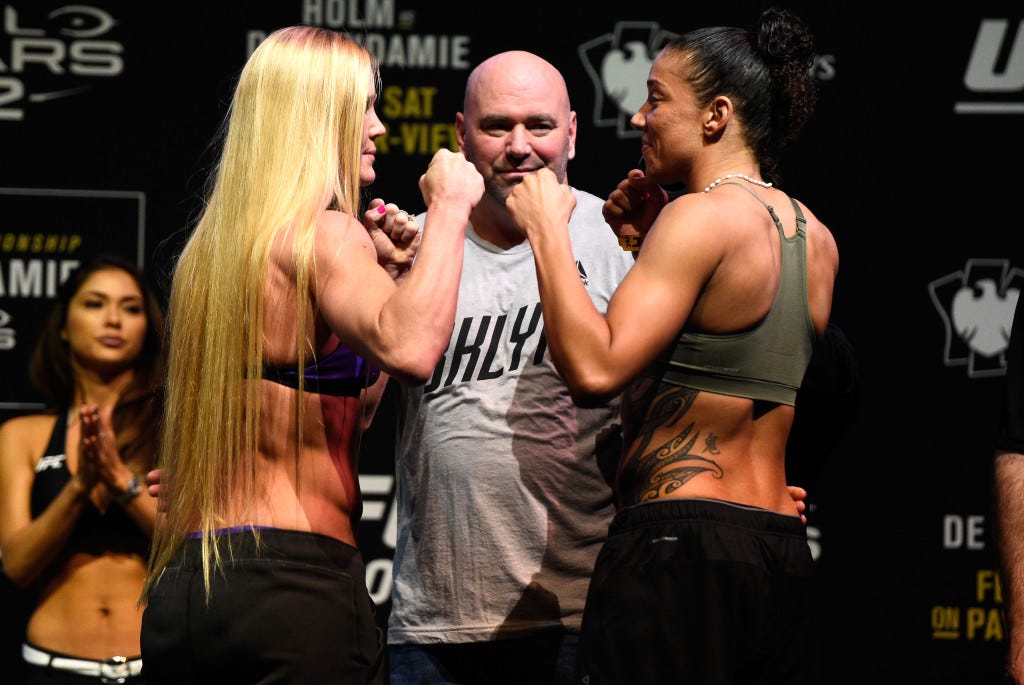 When mixed martial arts was made legal in the state of New York last year, the UFC put together one of the best fight cards in company history to consummate the marriage. We got three great title matches, hometown fighters, former champs, it was the perfect storm.

Tomorrow, the UFC returns to New York, this time in Brooklyn, and the matchmakers have assembled another historic card. This time around, it’s historically strange, not great, but it should be a lot of fun nonetheless.

The Women’s Featherweight division has been discussed for a long time in the UFC because of Cris Cyborg, and Cris Cyborg only. Fighters here and there would mention that 145 may be optimal, but nobody was truly rallying for it. The UFC gave in to nobody’s demands, created the division, created the belt, offered Cyborg like 12 fights she turned down, and got stuck with Holly Holm vs Germaine De Randamie. It’s not a bad fight by any means, but it just doesn’t make a ton of sense. Holly’s coming off two straight losses and while Germaine is kind of a killer, she’s never beat anyone with a win in the UFC. To cap it off, we saw from the weigh ins yesterday that neither of these women are natural featherweights. They’re both still shredded as fuck, but Holm weighed in at 144.4 and De Randamie at 143.6.

Before she fought Valentina Shevchenko, I firmly believed Holm was the best technical striker in the division. Clearly, that’s not the case, but I’m still giving her the edge tonight. As I mentioned previously, Germaine De Randamie has ZERO wins against anyone with a UFC win. So, while she’s looked great in most of her fights, she was facing a bunch of schmucks. Holly’s got way more experience in both boxing and MMA, and has fought against the top level competitors in the world, leaving me questioning why she’s the dog in this fight. I just hope the fight is less awkward and clunky than their face off this week.

VIDEO: Holly Holm and Germaine de Randamie square off at #ufc208 media day (@ekc). Who ya got? pic.twitter.com/ICrcUe5bff

Much like the last fight, I’m perplexed by the odds here. Derek Brunson’s a beast, but show some god damn respect to Anderson Silva. He’s maybe my least favorite fighter of all time, and Chris Weidman knocking his clown ass out was one of my favorite sports moments ever, but COME ON. HE’S THE FUCKING SPIDER! You could argue Brunson’s side, citing Silva’s 0-4-1 record in his last five, bringing up his supierior chin, and his youth, but Silva basically KO’ed the UFC Middleweight Champion Michael Bisping in February. People forget that.

Brutal matchmaking for Jacare here. He’s earned a title shot, but the division is in such a weird place right now that he has to compete in this filler fight. It’s nothing to win, everything to lose for him, and the complete opposite for Tim Boetsch. The odds for this one are right, because Jacare is all-around better in every aspect of the game, but there’s always the chance of a Tim Boetsch bomb landing.

This was one of the hardest fights to predict for me, because Glover’s coming off that brutal Rumble Johnson KO. We’ve seen the scenario a million times in this sport: a great fighter gets knocked into oblivion and is never the same again. I don’t think that’ll be the case tonight with Glover, but there’s an off chance it will be. I’m picking him due to his superior wrestling, and the matchup reminds me a lot of Teixeira vs Ovince Saint Preux. Hurts not going for a guy nicknamed “The Killa Gorilla” who I’m a big fan of, but it is what it is.

I was thoroughly unimpressed with Miller in his “victory” against Joe Lauzon this Summer, and it’s tough to judge his performance against Thiago Alves in November due to the weird weight cut issues on Thiago’s side. Poirier is coming off his first loss since 2014, and he’ll get back on track tonight for sure. Jim Miller’s reaching a fighter age where even with his two consecutive wins, the thought of retirement should be creeping up on him.

Weird card, but exciting nonetheless, and I’ll be in attendance with the squad, so look out for us.

Be sure to chirp the shit out of me on Twitter at @RobbieBarstool if my picks are wrong.