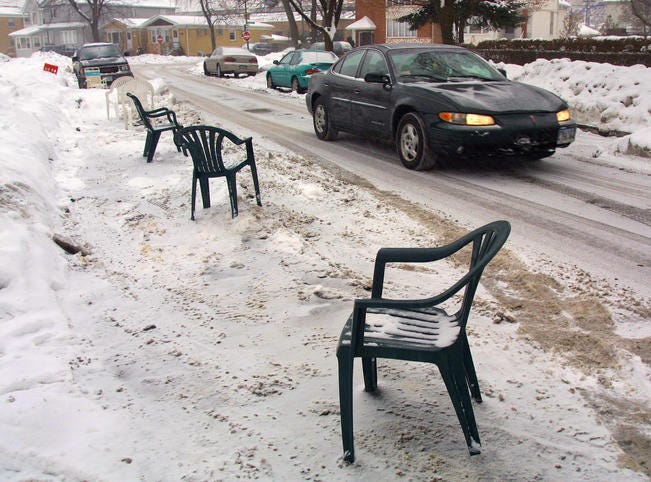 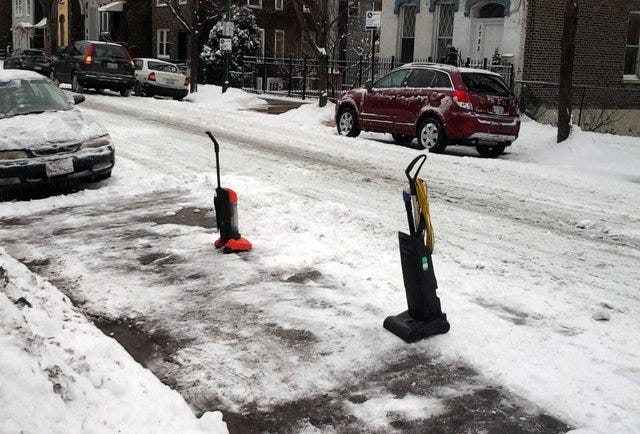 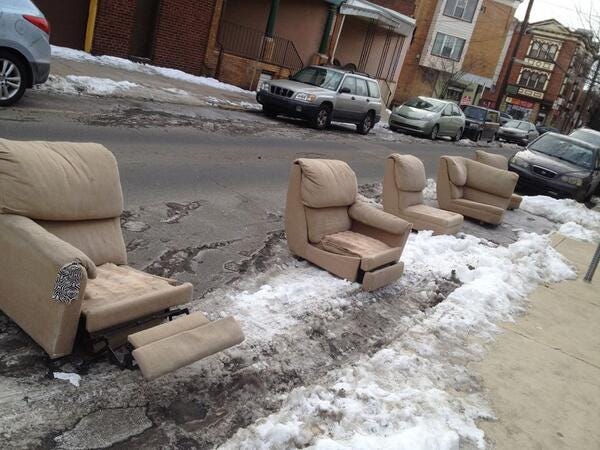 Ah, yes, the trials and tribulations of shoveling out your car in the city and the debate whether it’s kosher to save the spot. On one side, if it’s a public space then it’s fair game. On the other hand, it’s all well and good till someone gets beaten to death by a metal folding chair. If The Purge were legal there would be more deaths over parking spaces than all the wars in human history. When it comes to shoveling out spots and claiming ownership, it’s perfectly acceptable for all parties to see red. It doesn’t matter if the snow amounts to a dusting to The Day After Tomorrow. It’s best to be prepared for any situation and, above all, be civilized when it comes to street parking.

Because of this, we must revisit the official Judge Smitty’s ruling from last year. The precedent still stands:

My girlfriend came home to find someone had moved the chair that was saving her parking spot. She left this note on their car. My question to you is, is there any bigger asshole than a person who blatantly takes another persons saved parking spot which they shoveled out?

Toss this right up there with Roe v. Wade because we’ve got ourselves a barn burner here. Can totally feel for both sides of the coin.

On one hand, this broad obviously spent 2 hard hours sitting in the warmth while her boyfriend or some chivalrous neighbor shoveled her car out of the snow. Even though it’s a public street where anyone can park, she feels some sort of entitlement of the spot because she took care of it for a period of time. If this was her private, purchased space then it would be no issue. But it’s public property she’s taking care of and not her responsibility but she feels it is. Kind of like a Law & Order episode where a crazy, middle-aged cat woman babysits a stranger’s child once and claims it for their own.

On the other hand, is there anything worse thinking you have a place to park and seeing some asshat put a chair/stool/cone in the spot? Infuriating. I pay my taxes (some of them), that public space is just as mine as it is yours. Nobody forced anyone to put in the effort as they chose to shovel it out.

Judge Smitty’s Official Ruling: IN FAVOR OF THE DEFENSE

Although I feel for the dame in distress, there is no way she can claim public property for her own in any situation. This is America. Separation of church and state and parking spaces must be enacted. If my house was connected to a library that caught on fire and I solely put it out, can I say I now own it because I spent considerable time and effort diffusing a situation that could’ve directly affected my home? Shit no. You can’t claim ownership over government property. Reverse Eminent Domain doesn’t happen in real life.

Now, if this woman’s elevator went all the way to the top and put some effort into defending her royal space, then we would have a different story. I would’ve put multiple, immovable chests filled with sandbags in the spot. Surround the entire area with crime scene tape and coyote piss to mark the territory on top of leaving the most threatening note possible written in blood. Cap it off with nailing one of those Dream Catchers on the nearest sign to make it seem I have some sort of Voodoo in me or some shit. Instead, she decides to leave one folding chair with no explanation? For shame. It’s like if William Wallace invaded England and sacked York but only left one female pikeman there in defense for when the English return.

But what do the masses think?

Vote 1 for If You Shovel It You Can Rightfully Sell It or 10 for All’s Fair In Love, War And Parking…Which Is Essentially War Anyways: