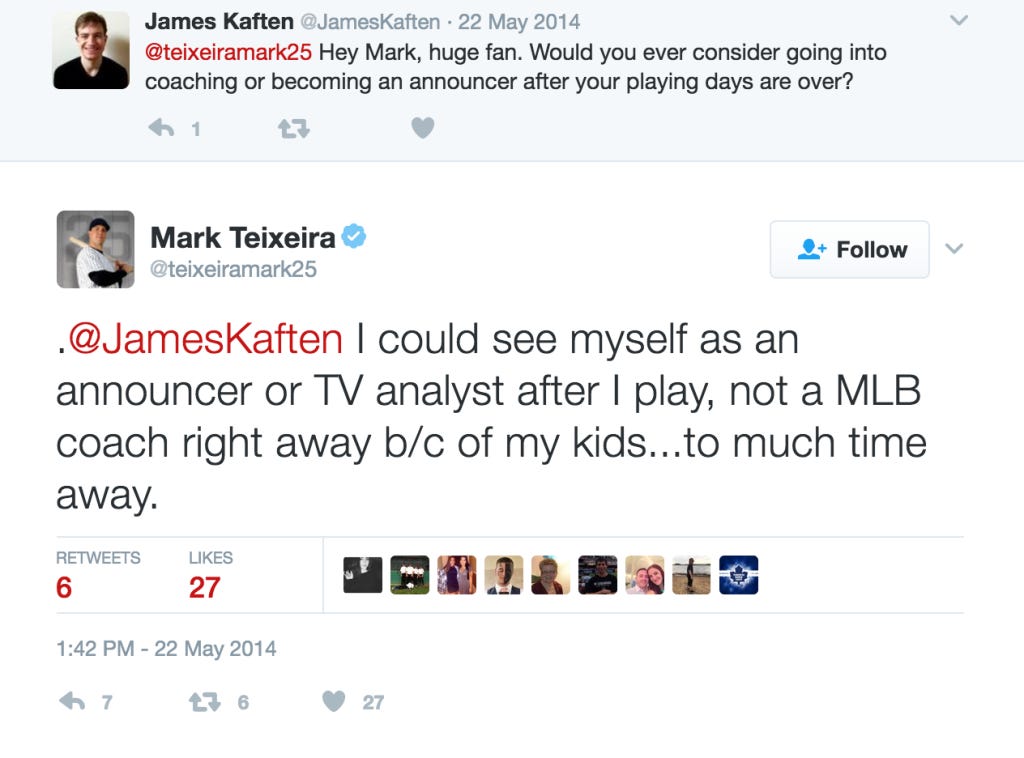 I’ll be honest, I hated Mark Teixeira with the Yankees, at least in the beginning when I considered him to still be a threat in that Yankee lineup. As you probably know, I’m a Red Sox fan. The Red Sox wanted Teixeira pretty badly when he was a free agent prior to the 2009 season. Boston and Teixeira played footsie during that offseason, before he ultimately chose pinstripes over the Red Sox — or, rather his wife did — so I was pretty salty about that for a long time.

But I’ve got a feeling that Teixeira will follow a similar path with me that A-Rod did. I think the hatred for A-Rod the baseball player goes beyond any allegiance to the Red Sox. I’m pretty sure he is/was universally hated by baseball fans of all allegiances. But ever since he’s taken on this new life as A-Rod the TV analyst, I love the guy. I really do. I think he’s great. His Instagram warms my heart every day.

And honestly, I think Teixeira has that kind of potential to win me over, because once I remove the saltiness from his free agency decision (which I no longer care about), I can fully admit that the dude is pretty fucking hilarious. I’m not sure how often, if at all, he’ll be able to showcase that humor on a network like ESPN, but I hope they let him do skits like this on whatever show they stick him on, because the guy is funny. I haven’t watched ESPN for baseball coverage since they launched the MLB Network, but I might have to check back in if Teixeira is doing Foul Territory-like segments for them.