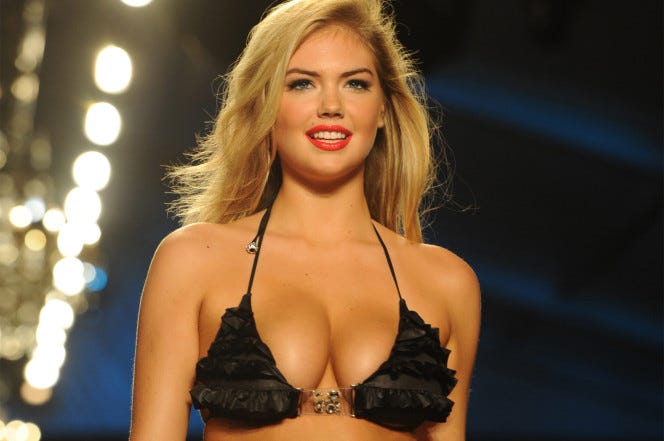 NY Post- Sports Illustrated is releasing its highly anticipated Swimsuit issue on Monday, and sources tell us that it’s likely they will have three covers starring tennis champ Serena Williams, 63-year-old model Christie Brinkley, and possibly Kate Upton. Last year, the magazine also used three covers, which featured curvy model Ashley Graham, Hailey Clauson and mixed martial arts champ Ronda Rousey in body paint. Sources tell us that an appearance by Upton — whose Rookie of the Year pictures in the mag in 2011 helped make her a star — is still up in the air because of her diva demands. “There was drama,” says the source. “Kate demanded that if she did the shoot, that she absolutely must get the cover. She also had a list of photographers and hair and makeup people she would only work with.”

October 27th, 2011. That’s the night I fell in love with Kate Upton. I was a young tyke aged 15 years at the Rangers home opener and they had celebrities walking down the “Blue Carpet”. As I was standing there, this young blonde model’s left boob hit into my elbow. I didn’t know who it was at first, but you bet your bottom dollar I found out when I got home from the game. Ever since then I have been a Kate Upton apologist through all the highs and lows. The arctic shoot, the nude prom picture with Verlander, the great ones from the Fappening, and even the Three Stooges. Even the fat days, I was right there by her side.

But this is where the line is crossed. I genuinely can’t remember the last big thing she’s done and she still has the balls to demand to be the only cover girl along with designated makeup people? The worst part is that Christie Brinkley is supposed to be one of the covers! Legend in the game, 63-years-old while still being hot as a pistol and Kate Upton’s 24-year-old ass is trying to upstage her. Fuuuuck that. I kinda hate Kate Upton now. You can’t come at Brinkley like that, no way no how.

PS: I am also suspending myself from looking at her Fappening photos for at least 2 months.