NBC - With the help of Bleacher Report, four-star running back Cordarrian Richardson announced his school choice on National Signing Day via a weather balloon in outer space, committing to Maryland — they hadn’t even been considered a contender entering signing day and he never visited the campus — over Ole Miss, Michigan State and Oklahoma.  In discussing his program’s 2017 class at a press conference Wednesday, Terps head coach DJ Durkin never mentioned Richardson’s name as the back hadn’t yet sent in a signed National Letter of Intent.

Thursday, Richardson did indeed fax in a signed NLI… to a school that wasn’t even in the video’s final four — UCF.

How bout this wackadoo? Sent a fucking weather balloon into outerspace to pick where he would play college ball, and picked….Maryland. The Terps. Despite the fact they didn’t really recruit him, he never visited the school, and never signed a LOI.

Then today he woke up and changed his mind. Said, nah, maybe I won’t go to Maryland. I’ll choose another one of those top 4 schools…. 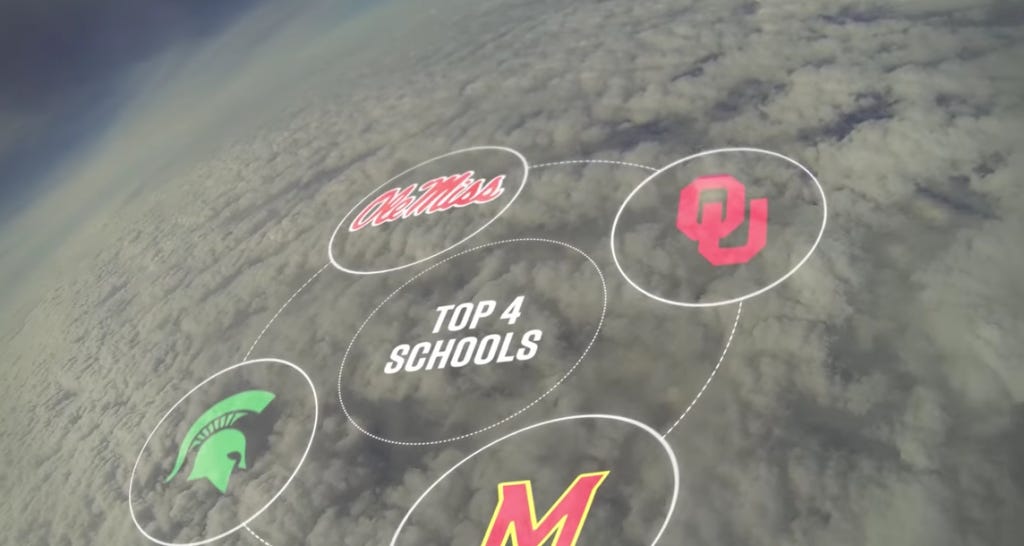 The University of Central Florida, but of course!

I wish I could say I hate the move, but I don’t. He made Bleacher Report go through all that trouble for this video, which already makes me love him. Then he randomly picked Maryland, and everyone yesterday was like wait, can you do that? Can you commit to a school that doesn’t even recruit you? I was about to follow his lead commit to Arizona State. I’m the new QB there, sup ladies?

No idea what went through his head during this whole thing. Maybe he’s just a jokester. Maybe he has a case of the crazies. I mean 24/7 had him at 100% to go to Ole Miss

So they were the real losers in this whole thing. Got passed over by a 17 year old with a weather balloon for Maryland AND UCF. Bad times, bad times.