THR- Carrie Fisher was always making people crack a smile in life, and she made sure she got just one more out of them in death. It was revealed on Friday that Fisher’s ashes were placed in a gigantic Prozac-pill urn. “It was a porcelain antique Prozac pill from the ’50s that was one of Carrie’s prized possessions,” Todd, Fisher’s brother, told The Hollywood Reporter.

Fisher died after suffering a heart attack late last month. She was 60. Her mother, the iconic starlet Reynolds, died a day later. She was 84. Fisher was honest and open about her battles with drugs and mental illness throughout her career. She also had a kooky sense of humor, so it makes sense the Princess Leia actress would want her urn to resemble an antidepressant pill.

Now THAT is a funny way to say goodbye to the world. I guess all those stories about Carrie Fisher having a great sense of humor even about serious subjects were true. Sure she had her demons but at least she recognized them and had some fun with it. I mean someone that says something like this clearly gets down with a bit of dark humor and is cool as hell: 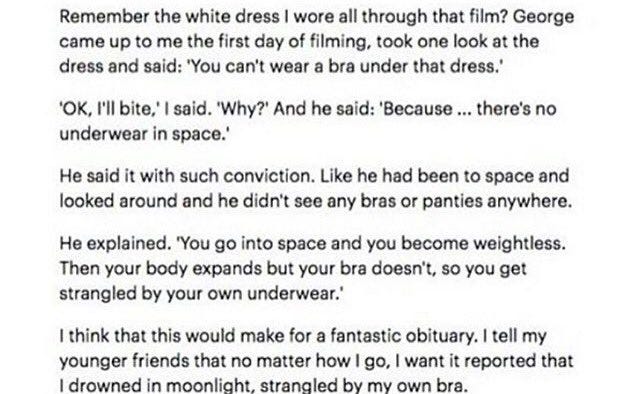 I bet Cinnabon wishes they could have tweeted that buns joke out now. Just another example of people being outraged about stuff that the actual subject of the joke would have been fine with. Even Carrie’s dog seems to have moved on.

And for the record, when I die, I would like my ashes to be the peanut butter filling in a giant Reese’s Peanut Butter Cup. Real chocolate too, obviously.

RIP Princess Leia. It is a true travesty that you drowned in moonlight, strangled by your own bra.