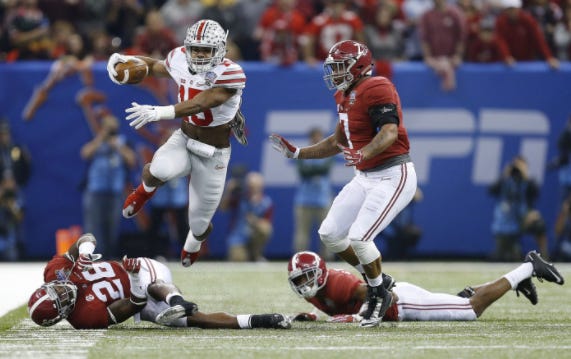 A few days ago, Ezekiel Elliott tweeted about how he’d give anything to play one more game at Ohio State. Which everyone got on him for since he, ya know, could’ve done that not just once, but as many as 15 times if he decided to play another year of college ball instead of take his millions and leave early for the NFL. No one faults Zeke for leaving of course, but it is pretty rich to hear a millionaire criticizing college kids for protecting their financial future when his is already secure.

After the #takes all subsided, it did leave an interesting hypothetical question: Just how good would this Ohio State team be if Ezekiel was still on it? How much greater would a team that was widely considered in the preseason, and still is, one of the top two or three in college football be if Ezekiel was right now a Buckeye instead of a Dallas Cowboy?

Luckily we don’t have to spend much time hypothesizing because there exists this wonderful city called Las Vegas. I asked Todd Furham, a former oddsmaker at Caesers who now does a bunch of interesting media stuff related to sports gambling, what the line would be if Alabama and Ohio State were to meet in the national championship on January 9 in Tampa. The number he gave was Alabama would be a -7 or -6.5 favorite.

That’s absolutely insane and proves one of the weirdest storylines of this season, which is how undercovered Alabama’s dominance has been. If Ezekiel Elliott has another big game this Sunday he will almost certainly be the NFL MVP. The only other rookies to win the award were when Jim Brown won the Associated Press MVP in 1957 and Earl Campbell won the Pro Football Writers Award in 1978. Two of the undisputed top ten running backs in the history of football. That’s the rarefied air that Zeke will be in. And STILL if he, this man who has dominated NFL defensive lines and put up historic rookie numbers, were playing against a team of 18-22 year old boys in Alabama he would not only be an underdog but an underdog by almost a full touchdown.

How historically great Alabama has been this year is an anomaly in a sports culture that is obsessed with hyperbole and historical comparisons. Especially college football fans who look at every team, program and coach through the lens of pedigree and past accomplishment. Alabama is expected to be the first college football team to go 15-0. They haven’t just won this season, they’ve dominated. Only one game has been within single digits. But the rise of Michigan and Jim Harbaugh Jim Harbaughing all over the place, who the next coach of Texas would be, LSU under Coach O, if Ohio State would make the playoffs without winning the Big 10 and the Big 10 surpassing the SEC all seemed to be bigger media narratives and discussed storylines than how the Tide are rolling this year. There’s a team that legitimately might be the best of all-time this year, and no one’s talking about it.

The only explanation for it is that Nick Saban has made us numb to his greatness. He has been so incomprehensibly dominant since he came to Tuscaloosa that we just sort of expect it at this point. Sort of like how no one cares anymore when the Patriots win the AFC East, we all just expect Alabama to win National Championships. If you’re (like me) too young to have vivid memories of Jordan’s Bulls, the expectation level for Alabama is at a point I’ve never seen for any dynasty, college or pro. And I genuinely wonder if seeing a football program this dominant, who every year they DON’T win the National Championship is a bigger story than the other way around, is something we’ll ever see again.