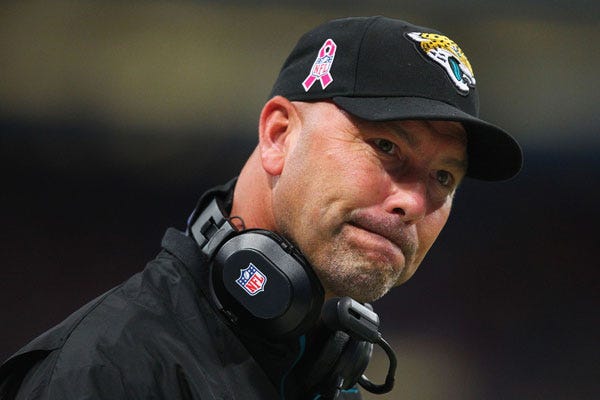 That’s it. That’s basically the blog. Every week PFTCommenter and I share stories and stats about just how bad the Jaguars are. This one takes the cake. It really does.

The “Jaguars have only won two games on the west coast since 1999″ stat is pretty damn good too but this. This stat is the stat that takes all the other bad Jaguars stats and crumbles them into a nice little ball and shoves them straight up my asshole until it reaches the fucking moon.

The Hooded One could lose every single game for 41 years and still have a better winning percentage than Gus Bradley. Unfuckingbelievable.

PS. I decided not to give you a post-game breakdown of the game last week because what’s the point. We lost again. But since I’m writing this now, I might as well let you know that the Jaguars got called for a delay of game on a kickoff this week. That hadn’t happened in the NFL since 1998. Ria the intern was barely alive.