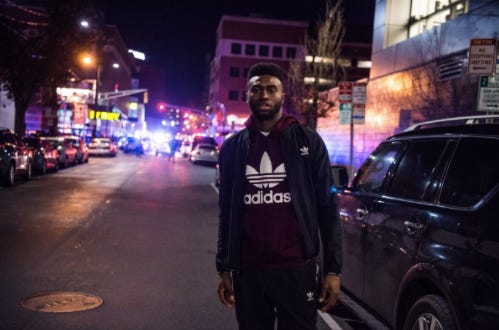 The juveniles, four males and two females, were arrested for disorderly conduct, disturbing the peace, and trespassing, police said in a statement.

Police estimated more than 1,000 people were at the East Cambridge mall when a large group of the event’s attendees surged forward, knocking over barriers and individuals waiting in line around 5:50 p.m. Cambridge police arrived to clear the “aggressive crowd” from the building, according to the statement. State, MIT, Harvard, Somerville, and Everett police were also present.

Look at your boy Jaylen Brown causing chaos at a mall in Cambridge! How many of all these people were there to see Jaylen and not Desiigner (?) I’m not sure, but that looked like a pretty decent time. I think we all thought that one day Jaylen Brown would lead a large celebration in this city, I just don’t think we thought it would come so soon.

Also, how happy is Champs Sports right now. Sports Authority might be bankrupt, but the big wigs at Champs are probably loving life. When was the last time 1,000 people were dying to get into a Champs Sports? Their name all over the internet/news last night and today. Now all the sudden they are the most exclusive store in that entire mall. You better believe when this gets rescheduled that twice as many people show up.

It’s good to see Jaylen embracing the city and the city returning the love. Have one dunk on Lebron and all the sudden it’s as if you’re a fucking Beatle. What a life.

If last night was any indication, Jaylen is going to be on Pierce’s level in no time