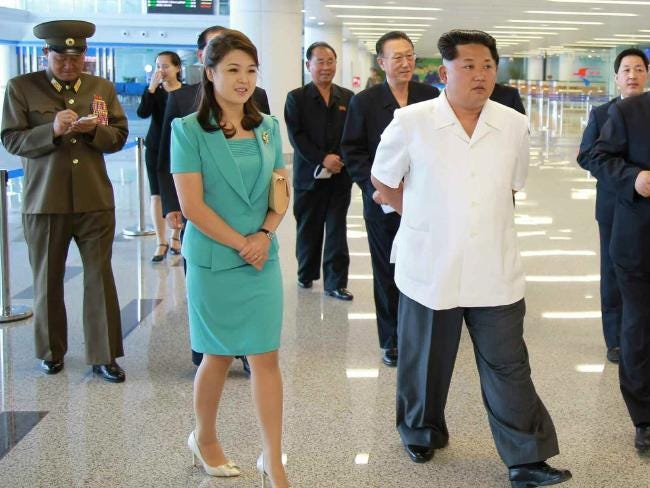 Independant- The wife of North Korean dictator Kim Jong-un has not been seen in public for seven months prompting speculation that she is either pregnant or has fallen out of favour. Experts monitoring the situation in Pyongyang have suggested Ri Sol-ju, who was introduced as First Lady in 2012, may have fallen out with Kim Jong-un’s younger sister, Kim Yo-jong, who is increasingly regarded as the power behind the throne.

Ri was last seen on a tour of a new commercial district and health complex in Pyongyang on 28 March, South Korean news agency Yonhap News reported. In contrast Kim Jong-un has frequently been seen touring the country and hosted the country’s first party congress in 36 years in May. He said: “There are several possible reasons, including that she is pregnant or that there is some sort of problem between the two of them.

Ri last disappeared from public view in 2012 prompting speculation that she had fallen out of favour or was pregnant. In 2013, former US basketball star Dennis Rodman – who has become an unlikely friend to the regime – revealed she had given birth to a daughter in late 2012. But Kim Jong-un is not above disposing of those closest to him if they fall out of favour.

He executed his uncle, Jang Sung-taek, after finding him guilty of treason despite their relationship being reportedly close beforehand. Announcing the execution, Kim Jong-un denounced him as “human scum worse than a dog” for an alleged attempt to overthrow him and introduce reform.

Dead! This bitch is dead! Dead beyond belief. Sure, there’s a chance that she is/was pregnant. But that’s not mutually exclusive with death. Falling out with Jong-un is bad, obviously, because the guy thinks he’s literally a god descendant from gods. But at least he’s a dude, and is thus equipped with at least some of the general common sense of being a male. His sister tho? Fuck that. You do not want to be on the wrong side of some chick who thinks she is an actual goddess.

And lest we think that -un would balk at the idea of killing a loved one, please reference the murder of his own uncle for trying to induce reform. Or maybe take this delicate flower: 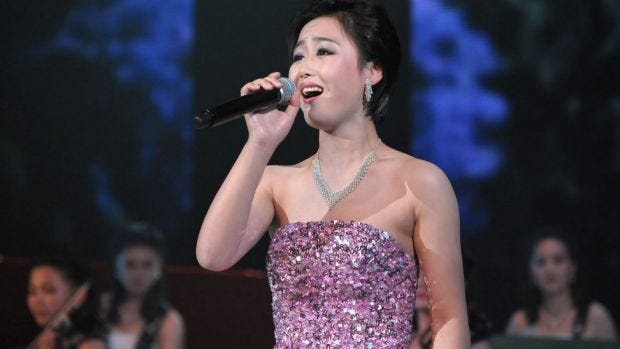 Kim Jong-un’s former girlfriend. Her name is Hyon Song-Wol. Or was. Because she’s dead now. -un killed the shit out of her after finding out about her part in a sex tape scandal. And it was no lethal injection for this broad. No humanitarian, walk-in-the-park waltz-to-the-grave. She was killed by firing squad, along with a dozen other performers, the poor sons of bitches. Judging by his track record, his move is to pick off the women in his life when he tires of them. I’m sure a lot of mere mortals wish they could do the same.

I don’t even care if this broad pops up in a month or so toting along a baby Corean. It is clearly an ever-so-hard-to-come-by look alike, because his current wife, rest her soul, is dead. It’s just a question of how. Did he obliterate her with an anti-aircraft gun, like he did to defense chief Hyon Yong Chol? All he did was fall asleep during a meeting, so the high caliber firearm seems appropriate. Or maybe he murdered his dear wife with a flame thrower, like he did to Security Minister O Sang-hon? Or maybe she was picked off with a mortar round, which was the preferred method of execution for an officer who was caught drinking during the mourning period after Kim Jong-il’s death?

Either way, it’s just clear that this guy looooves to kill people, and he clearly wasn’t going to let his wife stop his fun.

Meanwhile, in North Korean sports news, it looks like the fearless leader is putting up serious numbers on the court. Too bad he has to run a country, because he would be shaming Russell Westbrook with these stat lines.