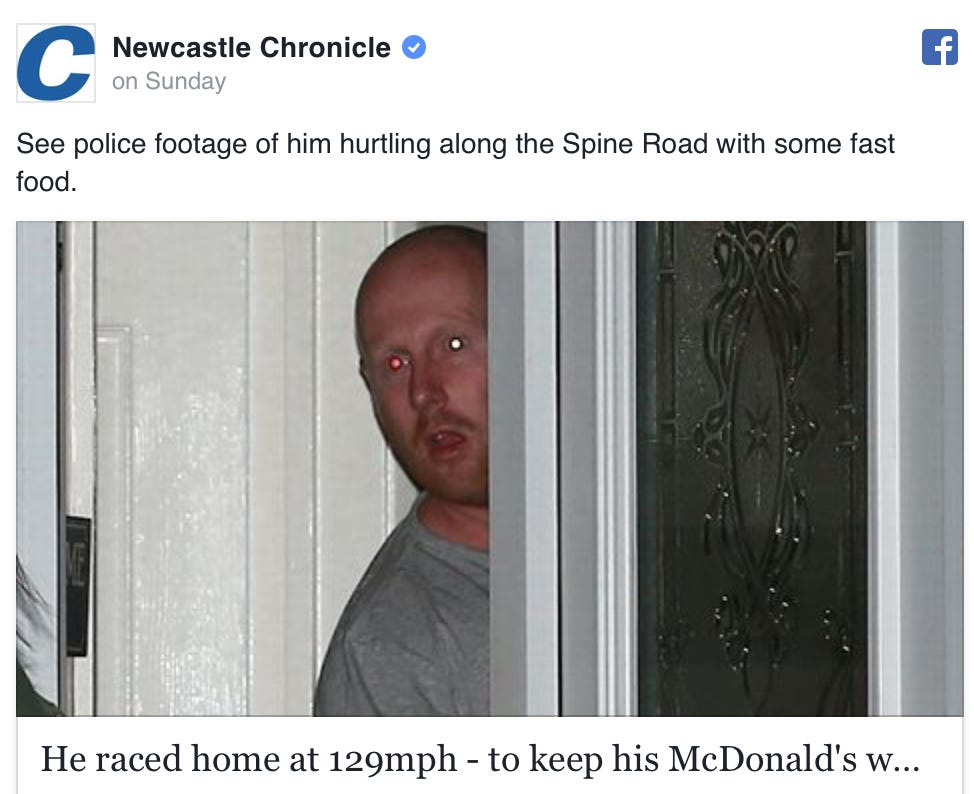 DC- British police caught a man speeding 129 miles an hour in rainy conditions because he didn’t want his McDonald’s meal to get cold before he got home. Lee Rutherford, a 32-year-old roofer, was driving twice the speed limit “because he’d been to McDonald’s and he wanted his food to still be hot by the time he got home,” Kyle Patterson, a defense attorney, told the court in Bedlington, England, according to Sunday reports. Patterson argued that since Rutherford was not “swerving” on the road, he should have a reduced sentence. He said Rutherford’s behavior was not dangerous, “just daft.”

This is oddly a feel-good story and I’ll tell you why. Normally you’d read past the part where he said he wanted to get home before his McDonalds got cold and get to the real reason why he was going 129MPH. Like he had 50 pounds of coke in his trunk or his BAC was a .39 or he had a loaded MAC-10 under the passenger seat or his pregnant girlfriend tied up in the back seat. Nope. None of that in this story. He purely wanted to get home before his Big Mac got cold. Was his behavior still super reckless and could’ve got someone killed? Sure but it’s mostly harmless. I can appreciate a man wanting to eat his food while it’s still warm. My question is, how far away does this dude live from McDonalds that his food would’ve gotten cold? Two things this world has no shortage of are Starbucks and McDonalds. There’s a McDonalds on every street in America. Stand anywhere in the U S of A, throw a rock and you’d hit 7 McDonalds. Maybe he did have his pregnant girlfriend tied up in the backseat after all.