CNN – Washington (CNN) – Gary Johnson is trying to be a major figure on the world stage, and it doesn’t sound like he’s doing it for the company.

The Libertarian presidential nominee was asked by MSNBC’s Chris Matthews during a town hall forum to name his “favorite foreign leader.”

Johnson began to restate the question, and Matthews interrupted: “Any one of the continents, any country. Name one foreign leader that you respect and look up to, anybody.”

“I’m talking about living. You gotta do this. Anywhere, any continent. Canada, Mexico, Europe, over there, Asia, South America, Africa. Name a foreign leader that you respect,” Matthews said.

Johnson, still struggling to answer the question, offered: “I guess I’m having an Aleppo moment … the former president of Mexico.”

Make it stop! End it Matthews! What’s wrong with you?! I could barely get to the end of that, watching through my fingers like it was a damn horror movie, squirming in my seat while you could actually physically see Gary Johnson’s brain melt into a puddle on a TV set. Terrifying and fascinating all at the same time.

And listen I am in absolutely no way suggesting that I’m smarter or more knowledgeable about the world than Gary Johnson, or that I could sit up there and rattle off all the leaders of all the countries in all the world along with their strengths and weaknesses. I am however not running for President of the United States, and I’m not demanding I be taken seriously as a candidate and be allowed to debate. 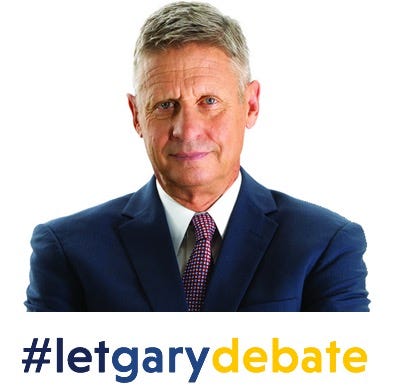 Like I don’t ask for much, I really don’t have a ton of qualifications that I look for, but being able to name one single head of state and knowing what “Aleppo” is are tiny tiny characteristics that I might find appealing in a future president.

The third party candidate was referencing his now infamous on-air appearance from the beginning of September when he responded to a question about Aleppo — a city at the center of Syria’s civil war and the heart of a refugee crisis as a result — asking: “What is Aleppo?”

His failure to identify a city that has become a focal point of the war in Syria, its human toll and resulting refugee crisis, signaled to many he was lacking in basic foreign policy knowledge.

I will say though, the Gary Johnson brand of just flat out admitting he doesn’t know shit is, to be honest, a little refreshing. And appealing. God damnit did Gary Johnson just mousetrap me? Let Gary Debate!!

Feels so good to be able to make fun of a candidate in the middle, that’s not named Hillary or Donald.