So here we are. It’s Tuesday. ‘Merica is going down the shitter. TPS reports are piling up. The boss is reeeeeeeally riding you. The weekend is a mile away. Aloha Friday isn’t even within shouting distance. Things are looking pretty bleak… but wait, what’s this

Awwwwwwwwwwwwwww yeah, life is looking up, boys and girls. So let’s get to it…

For anybody who missed it the first seven times and is just DYING for an overview of the 32 teams split into eight groups, here’s you last call: Comprehensive Champions League Preview.

As a quick reminder, here’s what happened on Matchday 1: 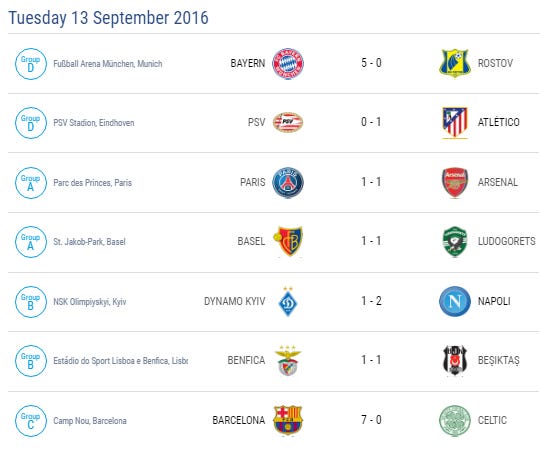 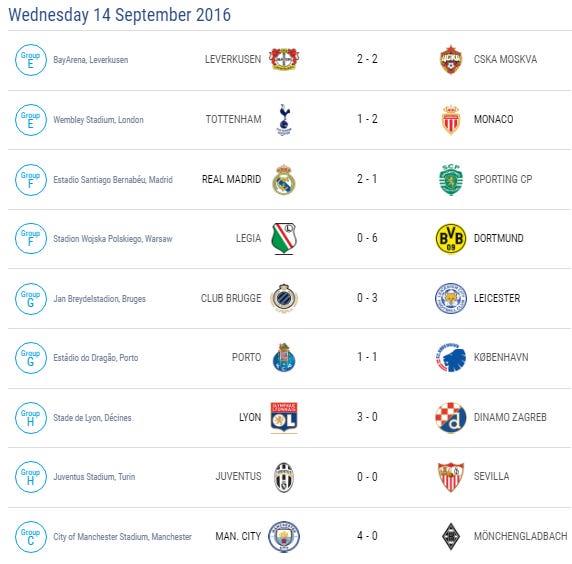 For those of you who are new here, there’s one highly effective strategy for doing well in the UCL group stage, which is: don’t lose your opening game at home. A recent study by some highly respected academic researchers found that 94% of clubs that start out with a home loss fail to advance to the knockouts. I totally made that stat up but the fact you thought it might be true even for a second more or less proves my point. Unfortunately several teams were too stupid to follow through on this, namely PSV, Dynamo Kyiv, Brugge, Legia Warsaw… and yes, Tottenham. Thus, the road forward for these dummies becomes that much harder. Thankfully there are five more games and they only need to finish second to move on, but safe to say the pressure on these five has been ratcheted up a bit.

Here are the games on deck this week (with a handy dandy guide to the various TV assignments): 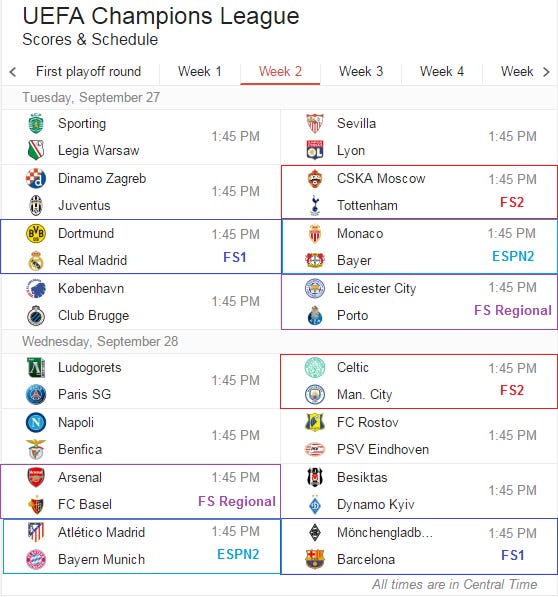 FOX, in their infinite wisdom, has gone ahead and made Real Madrid vs BVB the headliner for the day. Tough to argue with that (for once) given Los Blancos wide and deep fanbase + interest in our boy Pulisic. So let’s start with that one:

Two best teams in the group, both coming off wins. The performances could not have been less similar though, with Real squeaking (and I do mean squeaking) by with a 2-1 result at home against a more deserving Sporting side while Dortmund pounded the bejesus out of an overmatched Legia team 6-0 – in occupied Prussian territory, no less. Real has also suddenly faltered domestically with two straight draws to break their ridiculous 16-game Liga win-streak, which for most clubs would be considered a small dip in form but for the Spanish giants is instead thought to be a full-blown crisis.

In fact, the Spanish press have had a field day about the fact Ronny was subbed off in the middle of Real’s 2-2 draw to Las Palmas this weekend, and if there is one thing you do not want to do – never ever – it is bet against a motivated Ronny. Real to win 2-1. 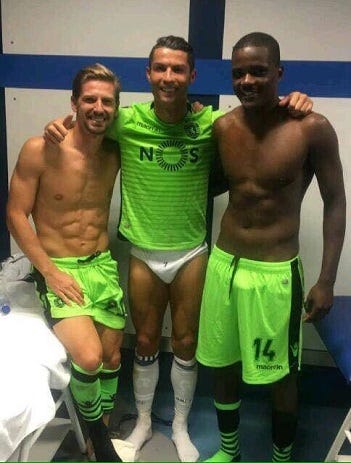 Bookmakers must know something about this game. I would have expected Monaco to be slightly favorites at the very least as the French side has looked relatively good in domestically so far (outside of a 4-0 ass-whooping at the hands of Mario Balotelli), and while they were not the better side against Spurs on the first match day they finished what few chances they saw and came away with the win on the road. Bayer may miss Hakan Calhanoglu, who would normally slot in next to Chicarito up top, and has been up and down in the Bundesliga while not looking particularly impressive in the 1-1 draw with CSKA last time in UCL. I’ll settle on a 1-1 draw. 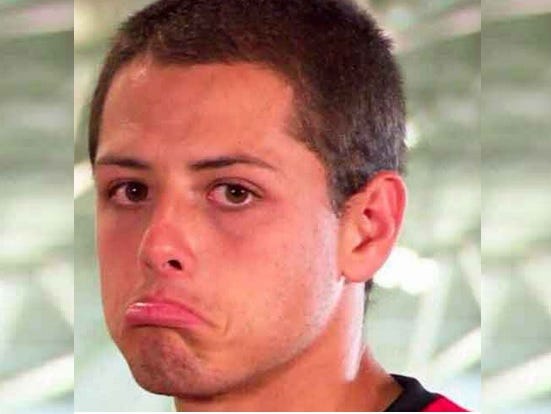 Spurs fans got some good news this week when it was announced Harry Kane may miss as little as 3 weeks instead of the expected 6-8 weeks, though just at the moment Son Heung-min – after coming within a whisker of being sold this summer – is holding down the fort up top nicely. Even so, its hard to love the visitors in this playing with guys like Moussa Sissoko and (more importantly) defensive lynchpins Eric Dier and Danny Rose on the road in Mother Russia against a CSKA club that has a habit of doing jussssssssssssssst enough to win this season (albeit not in their only UCL game so far). Is it a must-win for Spurs? By definition, no, but in reality it’s pretty damn close. Which will make it all the more painful when we jump out to a 2-0 lead then piss it all away. Gimme a 2-2 draw*. 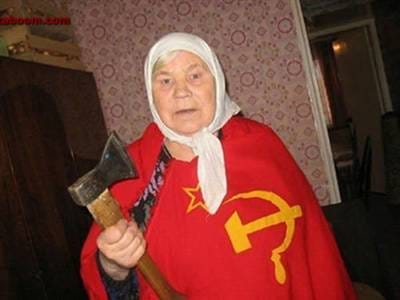 *Note: do I think Spurs will win? Yeah, for sure, but sometimes you just gotta be humble to appease the soccer gods

The Foxes’ loss to United this weekend was befuddling. Not the fact they lost, United is a good team and sometime you lose to good teams in soccer, but the way they lost made little sense. Giving up three set piece goals – all off corner kicks – is inexplicable for this club, and can hardly be blamed on N’Golo Kante’s departure. No choice but to chalk it up to it being “one of those things” unless a trend emerges. On the plus side, new signing Islam Slimani had an incredible goal scoring record against Porto (six goals in six games) when he was with Sporting. The Portuguese are a tough side to play against but I’m willing to wager this will be a bounce back game for the Foxes. Leicester to win 3-2. 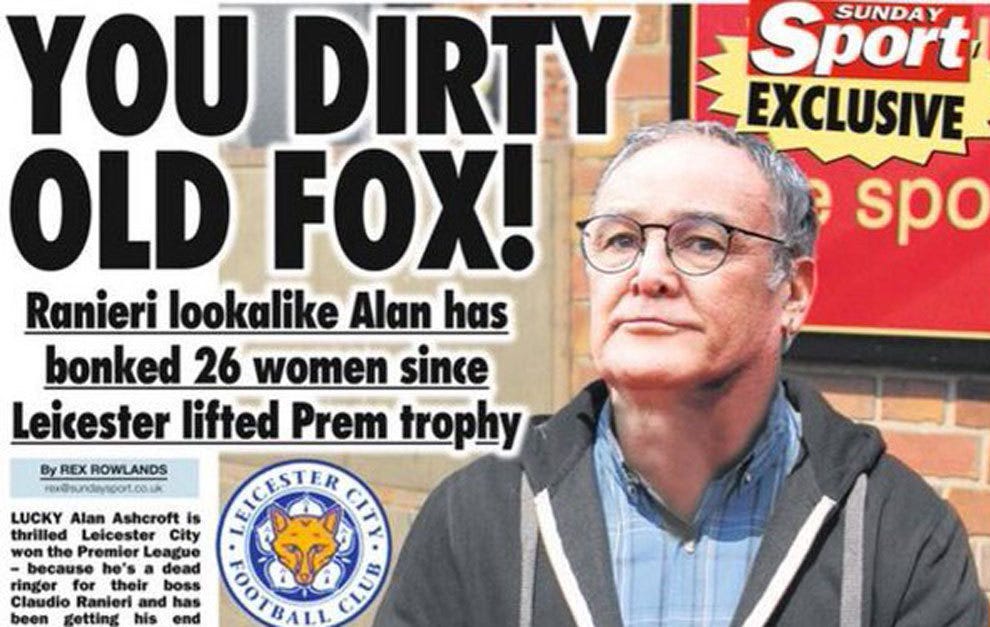 Snake it cause you made it #bonked

Random picks (because the more there are, the better the odds one ends up being right):

• Let’s be honest, Sevilla [-140] have kinda sucked lately but are a hard club to pin down based primarily on the 0-0 road draw they scrounged out against Juventus. Lyon [+400], on the other hand, have looked rather solid. Hard not to like those odds for the Frenchies… butttttttt, I’m going with Sevilla to win 1-0.

• Sporting [-400] deserved better than to come away from the Santiago Bernabeu with zero points, and woe be to be Legia [+1200] today as the Portuguese extract some revenge. Sporting to win 5-1.

Reminder: another biggggggggg slate coming at you tomorrow, including City and Arsenal .