Here is @RichLernerGC sharing the #ArnoldPalmer news thru so many emotions on @GolfChannel #welldone pic.twitter.com/zs4rWC78q5

Feels like just about everybody has an Arnie story. Although I never met The King, I too have one.

I was lucky enough to play Bay Hill in 2011 with a college roommate and his dad. We had the first tee time of the day, 7 AM. It was mid-winter and I hadn’t played in months. As a golf nut and avid Tiger Woods PGA Tour 2009 player, I was very familiar with Bay Hill. Teeing off, I was nervous as shit.

The first is a dogleg left par 4. I teed up my rock and promptly snap-hooked it into the left trees. The greenskeeper happened to be driving by; he stopped and yelled, “Two off the first tee!” I laughed but shrugged off the notion. I told him my buddy would never allow that.

“Son, it’s not a suggestion,” he said. “It’s a local rule. Mr. Palmer doesn’t believe in warming up, so at Bay Hill everybody gets a breakfast ball.”

Sure enough I teed up another, avoided the left trees, and made a par. Never got to meet The King, but he made me laugh and made my morning a hell of a lot better without being anywhere near me, an ability people from all walks of life are taking to publicly commenting on since the devastating news broke last night. Him being casual about the rules because he hated warming up, yet standing as one of the game’s all time greats is vintage Arnie. One of the richest, most famous sports figures on the planet for decades, yet remained true to his roots as the son of a greenskeeper. What a legend.

RIP Arnie. Jack Nicklaus, Tiger Woods and Bobby Jones are huge names, but Arnold Palmer is truly the biggest legend in the history of the game. Long live The King.

Here’s to The King who was as extraordinary on the links as he was generous to others. Thanks for the memories, Arnold. pic.twitter.com/UlyfpIBOL2

President Obama says “Arnold Palmer had swagger before we had a name for it.” pic.twitter.com/z53fgl1p3R

Thanks Arnold for your friendship, counsel and a lot of laughs. Your philanthropy and humility are part of your legend.

(2/2) It’s hard to imagine golf without you or anyone more important to the game than the King.

The Legends of all Legends in the game of golf! RIP my friend, always loved u and always will! God Bless my Friend! #AP pic.twitter.com/HPZthEnDmo

Once asked Arnold Palmer about a player who’d lost by playing conservatively.

“Did you ever do that?”
“I don’t know what conservative is.”

No better way to showcase that you’re a great dude than by repping The King. 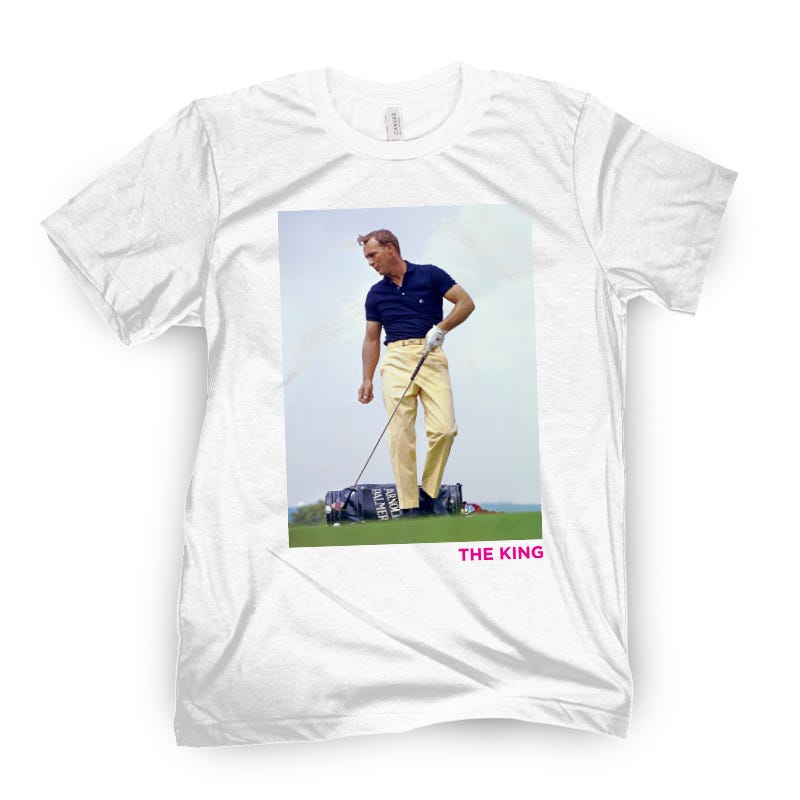 PS — Hey US Ryder Cup team, no pressure this weekend.