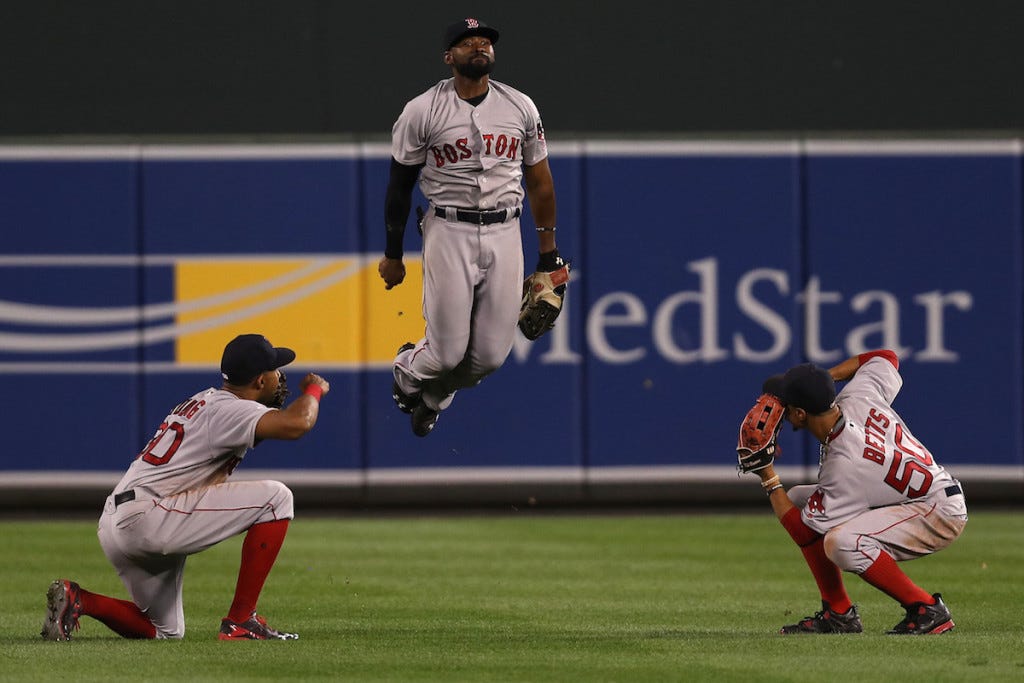 If the old saying is true, that teams who win in September also win in October, then next month is shaping up to be quite the ride for the Boston Red Sox.

After defeating the Baltimore Orioles on Tuesday night, the Red Sox improved to 13-5 in the month of September, which is the best record in the majors. As a team this month, they’re hitting .295, which leads the American League, with a slugging percentage of .491, and an OPS of .848, both of which lead the majors. They’re also averaging an MLB-best 6.44 runs per game, which is nearly a full run better than the next best team (Seattle, 5.61). But this should not come as a surprise that they’ve been the best offensive team in the game this month, because they’ve been the best offensive team in the game all year.

But can they pitch? That’s the question. That’s been the question since spring training. When you trade for one of the best closers in the game, and sign the best starting pitcher to hit the free agent market since, who, CC Sabathia in 2009? You know that your staff is going to be better. But how much better was the question. There’s no doubt that the staff has struggled throughout various segments of the year, but in the final month of season, it appears as if though things are finally coming together.

Last night, Eduardo Rodriguez threw 6.1 innings, allowing two earned runs on four hits, while striking out seven and walking just one. Since July 1, David Price, Rick Porcello and Rodriguez have made 42 starts, combining for a 2.85 ERA, a WHIP of 1.00, 239 strikeouts in 281.1 innings, and the trio of Red Sox starters are averaging 6.2 innings per start over that span. That should be your playoff rotation right there. If you want to debate over who should get the ball in Game 1, you’re more than welcome to do that. I think it’s certainly up for debate. But I think the debate over who should get the ball in Game 3 is over. It’s Rodriguez, as long as he remains healthy heading into October.

With his 36th home run of the season in Baltimore last night, David Ortiz now holds the distinction of being the player who has hit the most home runs in their final season in baseball history. I’m not going to be disappointed if Mike Trout or Mookie Betts wins the American League MVP award — you can spin the numbers and the narrative to show that either of them deserve it — but Ortiz is the most valuable player in the league. His MLB-leading slugging percentage continues to climb (.634), which also boosts his MLB-leading OPS (1.037). That home run gave him his 84th extra-base hit of the season, which also leads the majors. The stat geeks will vote Trout, Betts, Josh Donaldson and Jose Altuve, but Ortiz is the MVP. I don’t care if he’s a DH. He’s the driving force behind the best team in the American League.

With the win, the Red Sox magic number to win the American League East is down to 8. Let’s. Fucking. Go.