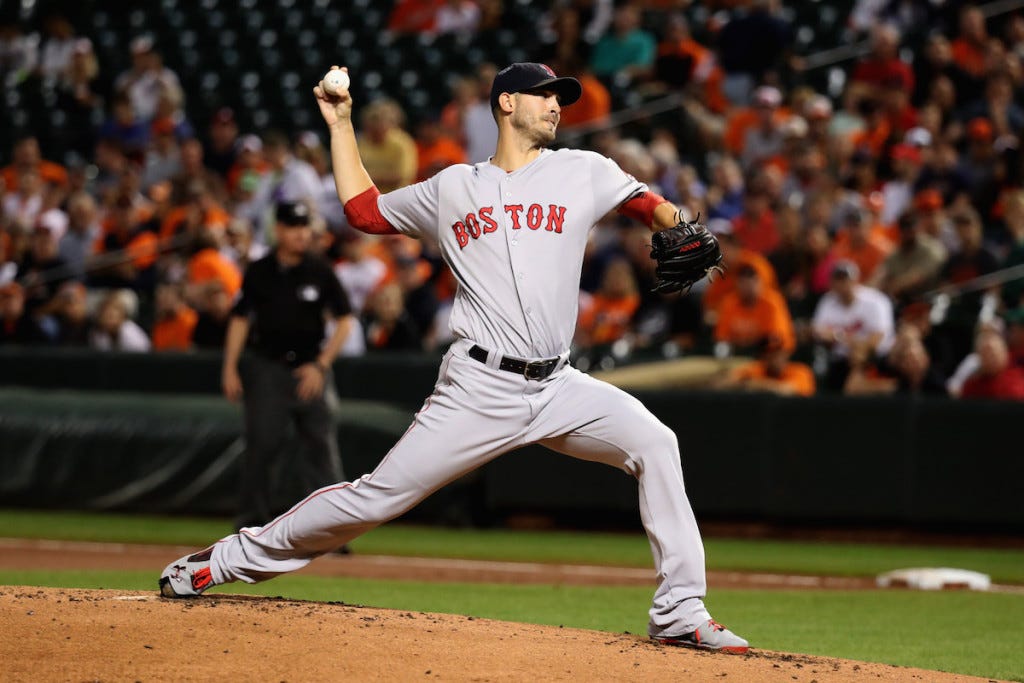 With the opportunity to put the Baltimore Orioles’ chances of winning the division to bed in this four-game series, Rick Porcello hammered the first nail in the coffin on Monday night.

His last time out, Porcello was the tough luck loser in a 1-0 loss to Baltimore at Fenway Park, despite going 8 innings, and allowing just one earned run, a home run to Mark Trumbo. This time, the Orioles weren’t as fortunate to have a shutdown performance like the one they got from Kevin Gausman last week. In this game, it was Dylan Bundy on the mound, and Kevin Gausman, he is not. Nobody in the majors gets more run support than Porcello (6.68 runs per start), and the Red Sox continued their trend of scoring big for their ace.

There’s no slam dunk candidate for American League MVP right now. In the month of September, Jose Altuve and Josh Donaldson, combined, are hitting .193 with a .609 OPS. Mookie Betts isn’t exactly setting the world on fire this month, but he’s been better than his MVP competition, hitting .268 with a .687 OPS this month. Still not great. Betts homered last night, his 31st, to give him his 8th home run at Camden Yards this year, and his 9th home run against the Orioles in general. Of the 11 Orioles who have played at least 40 games at Camden Yards this year, they’re averaging 10.5 home runs each. Mookie Betts has 8 home runs in 7 games there this year.

Then you’ve got this sicko — David Ortiz still throttling baseballs. I hate the MVP award, I really do. Because I kinda look at it as which player, if you took them off of their respective team, would be fucked the most? The answer to that question is David Ortiz. It’s not even close. But he won’t win the MVP because he’s a DH. It’s stupid.

Anyway, Ortiz hit another home run last night. That’s 35 for him, adding to his MLB-leading extra-base hit total of 83. It also boosted his MLB-leading slugging percentage to .630 when nobody else in the majors has a slugging percentage of .600 or higher, and it raised his MLB-leading OPS to 1.034 when nobody else has an OPS of .990 or higher. What the fuck’s this guy gotta do to win an MVP around here? Would it make that much of a difference if he stood out at first base and picked his ass for 110 games? What Ortiz is doing for the Boston Red Sox in 2016 is more VALUABLE than anything that any other player has done for a team in contention. I don’t care what the sabermetric stats say. That’s my opinion, anyway.

Speaking of valuable, aside from only needing 89 pitches to finish off his complete game against the Orioles last night, there is value in your ace pitcher being a bulldog with balls of steel. Fuckin’ Manny Machado, this dumbo-looking motherfucker thought that Porcello threw at him in the fourth inning when A) Porcello had a perfect game going, and B) Mark Trumbo, the guy who took Porcello deep last week, was on deck, hence Porcello’s fantastic response to Machado, simply asking, “Why would I wanna hit you with that motherfucker coming up?” and instructing Machado to “use his fucking head.” Gold, Jerry. Gold.

Also, some historical perspective here via Keith Costas of the MLB Network, Porcello is on pace to become just the fourth pitcher in the last 30 years to lead the league in WHIP (0.98), strikeouts to walks ratio (6.00), and win 20 or more games (21). If he were able to keep his position atop the American League in WHIP and K/BB, he’d join Pedro Martinez (1999, 2002), my friend Curt (Schilling) (2002), and some guy named Clayton Kershaw (2014) as the only four pitchers to accomplish this feat since 1986. Speaking of Porcello’s connection to Pedro, ESPN’s John Buccigross had a fire stat this morning.

Cy Young. Pedro Martinez. Rick Porcello. Over that 11-start stretch for Porcello, which began on July 29, the right-hander has a 2.34 ERA, which is the second best mark in the American League over that span, with a 0.72 WHIP, which leads the league, as does his strikeouts to walks ratio (13.20). The case for Porcello winning the Cy Young award in 2016 is very, very real. He’s got some stiff competition in Chris Sale and Corey Kluber, but Porcello’s case for this award goes beyond just a high win total. He’s a legit Cy Young candidate, and he could very well win the damn thing if he finishes the season as well as he’s been pitching over the last two months.