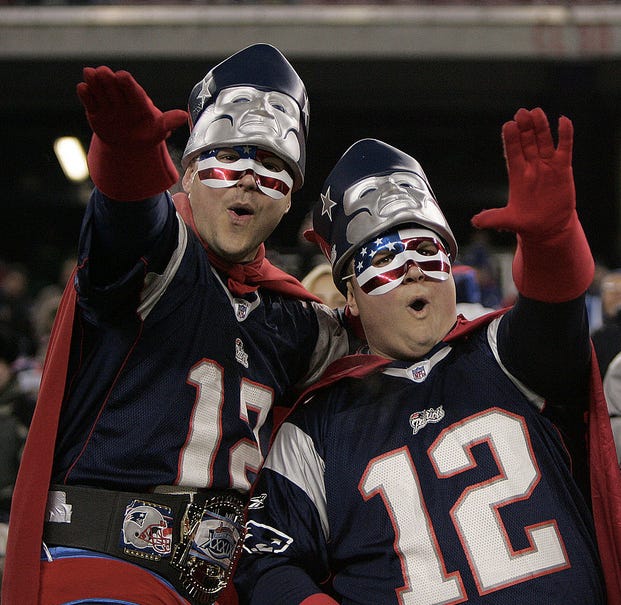 I planned on writing this article today no matter what happened last night, whether the Pats won or lost, because yesterday marked a tough time for you. It was the start of five months of watching the Patriots win and the start of five months of having to deal with Patriots fans chirping and talking shit every single day. Even as I write this very sincere letter admitting that we’re annoying and impossible, I know that I come off as a condescending dickhead. I don’t know what else to say. I’m sorry.

For the next 20+ weeks you’re going to have to see Patriots fans on Twitter talking about how we’re the greatest franchise the sports world has ever seen. You’re going to have to see me and Portnoy laughing and saying your team stinks. You’re going to have fans in bars laugh at your jersey, at your teams, at your coaches, and at your general existence. Some sons of bitches might even say that watching your team play makes them hate football because your team is an insult to what the Patriots do. I apologize. But what am I to do? What are we, as Patriots fans, to do? When a friend goes on an extravagant vacation, do you not allow him to tell you how amazing it was? Every Sunday is a vacation for us. Do you tell guys with six packs to put a shirt on at the beach? The Patriots make us feel as confident as that man does.

Those people are annoying, just like we are, but this is how the world works. There are the haves and the have nots. We have. I wish so badly that I could share our wealth with you without you thinking we’re jackasses, and I wish you could feel the joy I feel every time the Patriots take the field without talking down to you. It’s just not possible.

I SWEAR that I’m not trying to be a piece of shit right now. I’m sure it seems like I’m Seinfeld standing in first class and telling you, “Well maybe if you worked a little harder…,” before closing the blinds on you and sending you back to your shitty team, but I’m just trying to tell you that I empathize and can’t imagine how hard it must be to deal with us year in and year out. We suck. Well, we obviously don’t, but you get what I’m saying.

Please take this letter as a formal apology. Think of it like a husband with a drinking problem telling his wife that he knows his actions hurt her emotionally and he’s going to try and be a better man in the future. Everyone involved in the conversation knows it’s never going to happen, but acknowledging the problem is the first step. Today, I’ve taken that step. Give me credit for that.