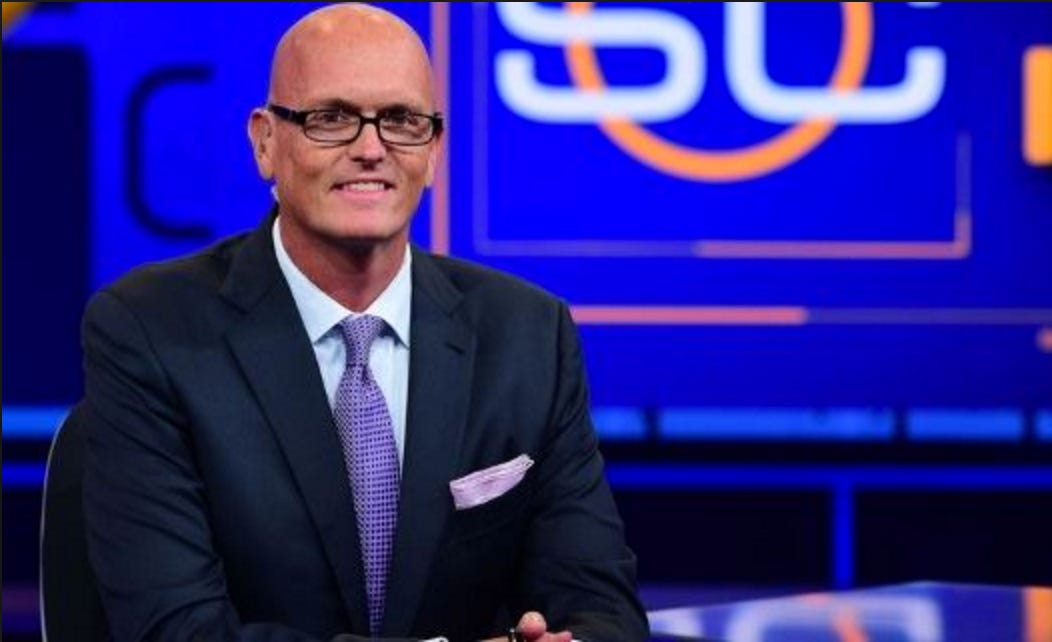 For your listening pleasure as you read SVP’s quotes:

Awful Announcing –  Van Pelt talked with the Washington Postabout ESPN and its alleged rivalry with Fox Sports, FS1 in particular. While FS1 has been trying to get under ESPN’s skin by promoting Skip Bayless’ show with a billboard near the Worldwide Leader’s headquarters, the sports media behemoth continues to move forward. When asked about FS1 and former ESPN wunderkind Jamie Horowitz, Van Pelt wasn’t afraid to opine:

“Jamie Horowitz is a guy that’s a friend, and every article he’s quoted in he mentions ‘SportsCenter’s’ failing ratings. And not one says, ‘Well how about [the Cowherd-Whitlock team-up] “Speak for Yourself,” which gets 50,000 people.’ We don’t have a single show that rates that badly. He gets constantly quoted talking about our ratings, and that is an astonishing thing that continues to happen. … At some point, if you’re going to talk [junk] about our ratings, you should be held accountable for yours. They’re not close. And by not close, I mean it’s like Washington to Los Angeles, not Washington to Baltimore. You’re a long, long, long, long flight away.

And Van Pelt wasn’t done bringing up ESPN’s ratings as compared to FS1:

Van Pelt said anyone who rings the death knell for ESPN in the wake of cord cutting and cord shaving does so at his or her own risk:

“I look at it this way: [Stories like that are] like a Mad Lib: We’re going to reference cord-cutting, we’re going to reference the names of the high-profile talent who have left, then we’re going to mention that a bunch of people were let go, and then we’re going to mention ratings. … And the picture that it begins to paint is, ‘We’re [in trouble],’ ” Van Pelt said Tuesday in a telephone interview. “And then you see in the third quarter ESPN made $5.9 billion. I would put it this way, the analogy I would make is: Warren Buffet lost $50 million. He’s still a billionaire and he still has more money that the people he’s in common with that it’s not even close. So my push-back and my fatigue with this, and it’s real fatigue — I’m really tired of being painted as some sort of failing, sinking ship.”

The late night SportsCenter host says people should look at the whole picture before discussing ESPN. Van Pelt says FS1 has not made huge in-roads into ESPN’s ratings and noted the layoffs at Fox that has led to low morale at the company. He said that is not the case in Bristol:

“No one’s looking around up here and saying, ‘Oh God, I hope we get paid next week.’ That’s not the reality that we’re existing in. We’re still us, and if we were losing everyone and some competitor was closing the gap, then I think you’d look around and say, ‘What do we need to do?’ I don’t know who can show me any evidence of that.”

Clap back! He gon clap back!

SVP has entered that rare air for me where if he talks, you listen. I’d go as far to say that, for me, only Mike Francesa (And Dog, to an extent) is ahead of him when it comes to these things. Its rare that Scott “punches down,” as he put it when he smoked Jay Mariotti’s ass, but every now and then he decides he’s going to speak up about a topic and when he does, its appointment TV/Radio/Print. He always does it with swagger and its always calculated and smart.

Now, to be fair, I think the criticisms of ESPN are valid. I think its a “sinking ship” in the sense that their over all approach and strategy is kind of to hold on to the fact that they are the mothership. I think a company like Barstool is forward thinking and trying to evolve and be ahead of the curve and a company like ESPN fights change and would love everything to just stay the way it is. So, I guess, in some infinitesimal way, its sinking. Its like a teensy tiny hole in the hull of an air craft carrier. They may not be progressive or new school, but they certainly aint sinking.

So, if you want to point out things like that, go ahead. But it is absolutely NUTS for Fox Sports to use the ratings argument. Thats fucking insane. Thats like the Eagles using a Super Bowl argument. FS1s ratings are embarrassing by any standards. Portnoy could make a video of him eating a banana tomorrow and probably get more eyeballs than some of the fully produced shows on Fox Sports. When you are gonna try to trash another man’s numbers and your show is only rocking out with 28,000…like what the fuck are you doing? THAT was the avenue you decided to go down? Like Big Mike says…if you come for me, you betta bring moah than a peashootah. And when you start talking ratings from FS1 thats the very definition of peashooter. Thats how you end up with a guy dropping a reference to the Cincinnati Reds attendance being larger than your audience and smoking you with all the skull emojis the internet has to offer. Thats how you awake a sleeping giant to drop a number like 5.9 billion on your dome piece.

Again, there are some fair criticisms of ESPN. There are some smart and legitimate ways to take some shots at the mothership. Chirping ratings when youre at Fox Sports 1 aint one of them. Chirping at The Bald Butcher aint one of em.