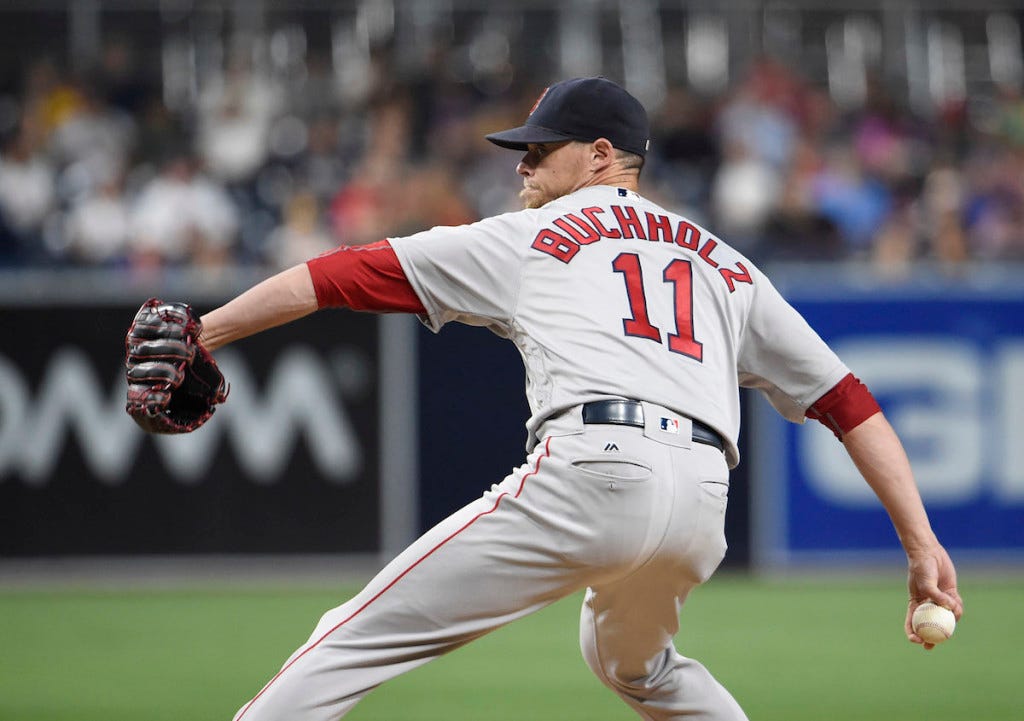 I had Clay Buchholz’s bags packed for him. I actually had written somewhat of a farewell letter to him about a week before the trade deadline.

But he’s still here. And not only is he still here, but the Red Sox actually need him. For about a month, he was in purgatory. He was in the bullpen, but he wasn’t part of the bullpen. He was a man without a role, being stashed in the bullpen because he had pitched his way out of the rotation. Ironically, he was actually healthy for the first time in a long time, so they couldn’t hide him on the disabled list, and he couldn’t be optioned to the minors, either. To Dave Dombrowski’s credit, he was looking big picture the entire time, despite fans like me figuring (and hoping) that there was no way he’d still be in the organization after the deadline on August 1.

Buchholz knows better than anybody — injuries happen. The Red Sox had not one, but two starters go down right around the same time in Eduardo Rodriguez and Steven Wright, with the latter likely gone for the rest of the season. The organizational depth at starting pitching within Boston’s organization is less than great, so if Buchholz had been dealt for, let’s say, a reliever, then they’d really be screwed right now. If Buchholz had been dealt prior to the Wright injury, the first name they would’ve called likely would’ve been Henry Owens, who absolutely blows. Instead, in Wright’s place, the Red Sox have Buchholz, who has a 2.20 ERA with 22 strikeouts in 32.2 innings over his last 12 appearances, four of which have been starts.

Last night in San Diego, Buchholz went 6.2 innings, his longest outing since May 4, and held the Padres to just one earned run, while striking out six. And the only reason why he didn’t go deeper into that start was because he was returning to the rotation from the bullpen (again), so John Farrell made the decision to give Buchholz the hook after 87 pitches. But, in regards to the rotation, it sounds like Buchholz is here to stay, and I don’t think that’s such a bad thing at all.

Sure, Wright had been fantastic in the first half, but since July 1, he had a 5.53 ERA, and opponents were hitting .284 with a .785 OPS against him, and that was with a complete game shutout mixed in there. Since that same date, Buchholz has a 3.29 ERA. You tell me — which one would you rather have in the Red Sox rotation down the stretch, as they battle for first place, now tied with the Toronto Blue Jays, with only teams within the division remaining on their schedule after this Padres series is over? I’m taking Buchholz.

Some crazy shit happened last night, too. The Red Sox got a hit with runners in scoring position. Just one, but it’s a start. That makes them 1 for their last 22 with runners in scoring position, but that one hit was dope, though. The rest of their runs came on home runs, as was the case on Monday. Jackie Bradley Jr. hammered a two-run shot in the fourth, and Chris Young followed up with his second home run in as many days to go back-to-back. It’s been a really weird season for Bradley. He’s hitting .273 with an .854 OPS this year, and it does not feel like it at ALL. I buy the OPS, because he’s slugging .501, which makes sense because he has 29 doubles and 23 home runs, but when he comes to the plate, I don’t feel as confident as one should feel when a .270 hitter is coming up. Weird year for him. He’s gone through major slumps batting average wise, but the power never disappeared on him.

By the way, if you’re a prospect junkie like myself, I figured I’d pass this along if you’re looking for something to do tonight with the Red Sox being out on the west coast and not starting until 9:10pm. The Lowell Spinners are in the postseason, and they’re playing tonight at LeLacheur Park at 7:05pm. Mike Shawaryn, who was taken in the fifth round this year, is getting the start for Lowell. Their roster also has third baseman Bobby Dalbec, who was selected in the fourth round of this year’s draft, shortstop CJ Chatham, the Red Sox’s second-round pick in the 2016 draft, and Jay Groome, whose name you might recognize, as Boston’s first-round, No. 12 overall pick this year. Tickets are just three bucks to get in.