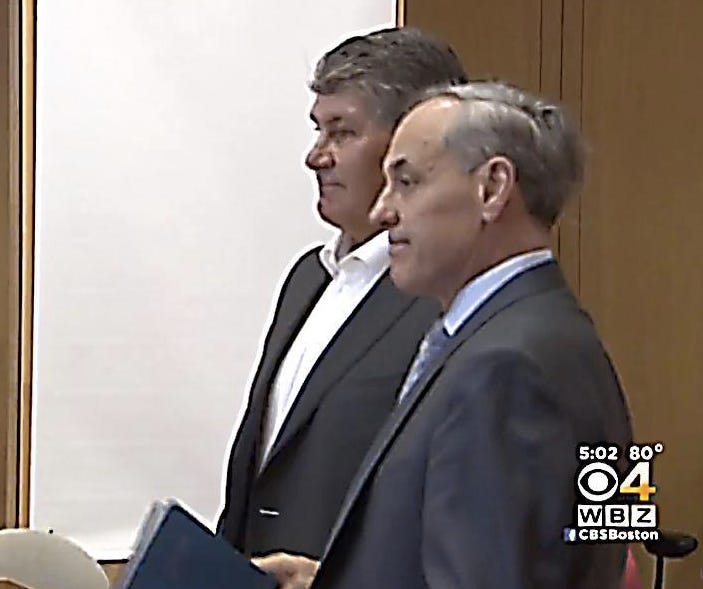 (Globe) — Bruins legend Ray Bourque’s blood-alcohol level was three times the legal limit when his Mercedes struck a minivan carrying a group of teenagers in Andover on Friday night, according to a police report released Monday after the hockey icon’s arraignment for allegedly driving drunk. Bourque, 55, of Boxford, was arraigned in Lawrence District Court on charges of operating under the influence of liquor and following another vehicle too closely. A not-guilty plea was entered on his behalf, and he was released on personal recognizance. His lawyer, Gerard R. LaFlamme Jr., could not be reached for comment after the hearing. According to an Andover police report, Bourque was driving a Mercedes Benz GL450 on Lowell Street when he rear-ended a minivan that was slowly entering a construction zone at about 11:25 p.m. Bourque agreed to perform field sobriety tests and swayed from side to side after he exited his vehicle, the report said. He performed poorly on the tests and blew into a portable breathalyzer, which showed a blood alcohol level of .249, according to Arleque. The legal limit in Massachusetts is .08.

I’ve never had to good fortune of being breathalyzed so I’m not entirely sure what a high score is, but I feel like a .249 at 11:30 at night is insanely high. In fact, I did look it up on a BAC chart and it says you’re pretty damn close to being a dead person. Having said that, I don’t trust charts. They’re like combine numbers and don’t factor in one’s will to win. Like I’ve probably had my BAC up in the red before, though I wasn’t stupid enough to get in a car so I can’t be sure, so is that chart telling me I’ve cheated death? Same as body fat charts that tell me I’m obese. Oh really? Because I don’t want to be obese therefore I’m not. Can’t chart the human soul’s attitude.

Chart disbelief aside, I think .249 is just a bit high. When I saw this tweet Saturday night I said that it takes some stones for a cop in Massachusetts to arrest Raymond Bourque, but when you’re a dead man rear-ending kids in a construction zone I feel like you kinda take it out of their hands. Blow a .09 going 10 MPH over? Yeah, you get a ride home and pick your car up in the morning. Destroy a minivan and you probably need to sleep that one off in a cell.

Respect the not guilty plea though. This is like getting caught by a dead body then issuing a confession, gotta love stil dropping a “wasn’t me.”