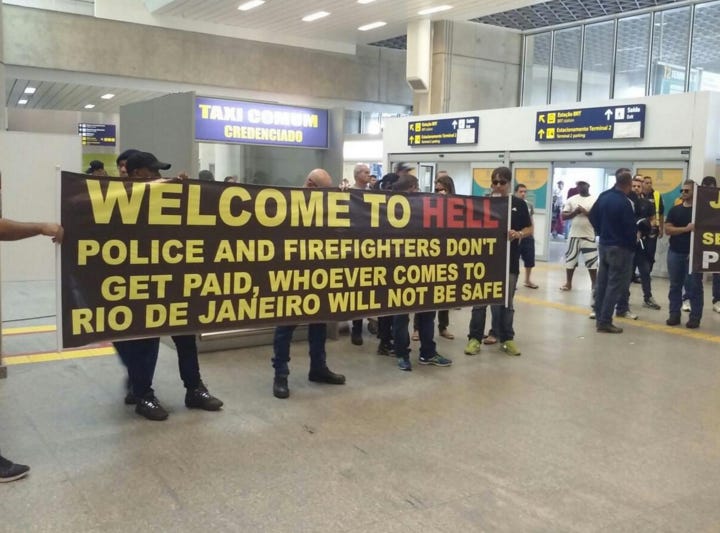 Yahoo - Visitors to Rio de Janeiro’s main airport on Monday were greeted with a troubling banner: “Welcome To Hell”.

It was there for all to see, held aloft by first responders protesting late paychecks and poor working conditions.

“Police and firefighters don’t get paid,” it continued. “Whoever comes to Rio de Janeiro won’t be safe.”

On a roadway leading away from the airport, blue lettering on a bridge reads: “Welcome, we don’t have hospitals!”

Concerns about the Zika virus, the pollution in the local bay and the city’s rush to finish construction may all be superseded by a developing worry ahead of the Olympic Games: Rio’s ability to handle crime and crisis. One spokesman for the Rio police force declared, “We are in a meltdown.”

“We have a desperate government and agencies,” one Brazil-based counterterrorism agent wrote in a message to Yahoo Sports. “The danger has never been so close.”

Monday’s airport protest comes on the heels of a declaration last week by the state government of Rio that the area is in a “state of calamity” which could bring about a “total collapse in public security, health, education, transport and environmental management.” Brazil is facing dire threats from a collapsing economy, and the city of Rio has seen an uptick in urban violence since the World Cup was held in 2014. The backdrop is the ongoing impeachment process of Brazil president Dilma Rousseff.

A classic good news, bad news situation here. Let’s start with the bad news- Rio is a complete disaster. Zika left and right, construction still not finished, police and firefighters aren’t getting paid, no hospitals, crime on crime on crime, and as they put it, a “state of calamity” and a “meltdown”. The good news is they have 2 years to….oh nope, the opening ceremonies are August 5. AUGUST 5th!!! There’s absolutely not one single piece of good news about these upcoming Olympics. Every golfer is pulling out because you’re more likely to get shot and not have a hospital to go to than win a medal. The government has pretty much thrown their hands in the air and declared it a complete failure. And yet in about a month, brave souls from around the world will willingly travel there to partake in obscure sports for 2 weeks. And it really sucks for them. The Olympics really are about sports that only get to shine ever 4 years. Can’t imagine working my life as a synchronized swimmer or handball player only to sit out the Olympics. The Olympics are all you have, can’t let a little Zika get in the way.

The only good news for the athletes is the Olympic Village is generally isolated, like it’s own little city, where common folk can’t get to them. It’s the tourists (if there even are any this year) that are in the most danger.

Let’s hope that the IOC learns from this, and doesn’t put the Olympics in a dog shit city again. Let’s keep it in the first world where people who want to go there don’t have to worry about being shot in the face because they want to watch some water polo on a Wednesday afternoon. I think that’s fair.