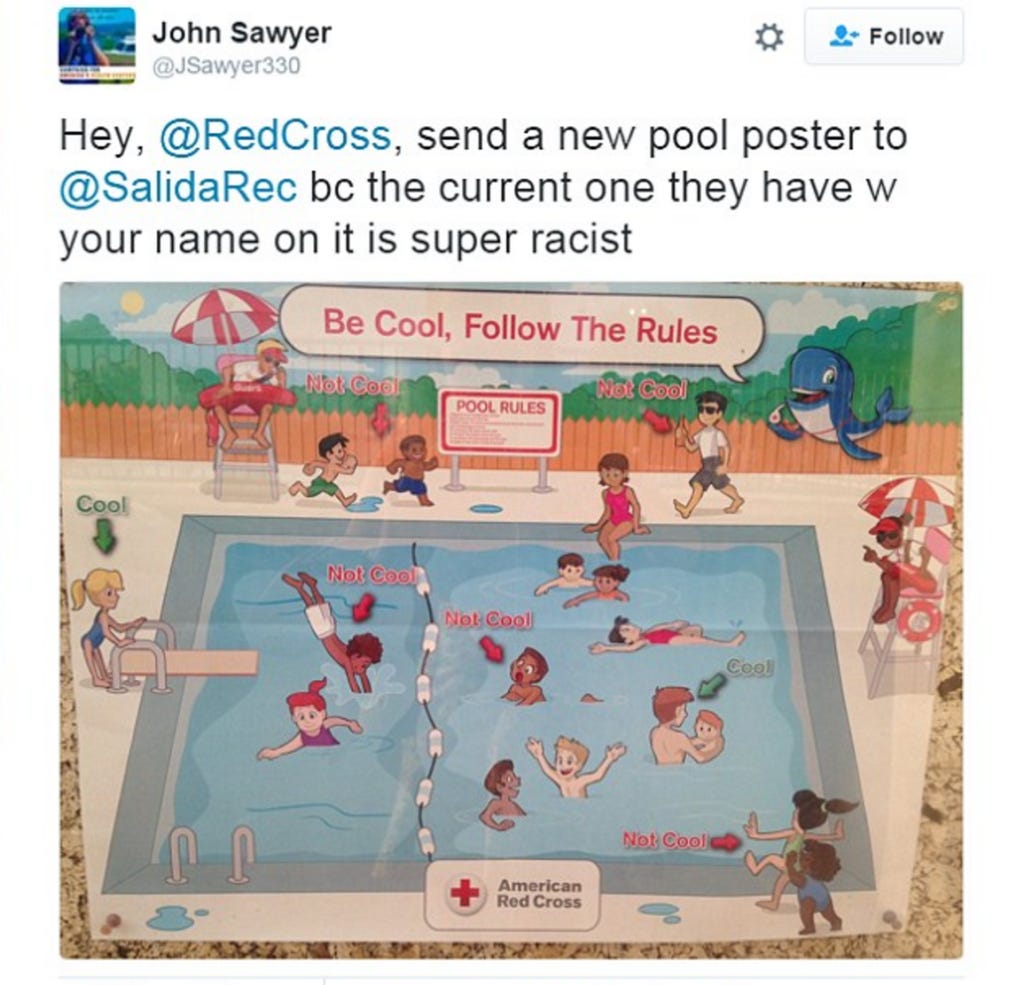 NBC- The American Red Cross apologized Tuesday amid backlash over a sign it created on swim safety guidelines for children that was perceived as racist, NBCBLK reported. The apology came after a photo circulated of the poster on social media. The poster, which was seen on display at pools in at least two towns in Colorado, read at the top: “Be Cool, Follow the Rules.” Below the heading were depictions of children playing. The white children were labeled as behaving “cool” while children of color were depicted as misbehaving, or “not cool,” for breaking pool safety rules.
The Red Cross said it has discontinued the production of the poster and removed it from its website and Swim App. “We deeply apologize for any misunderstanding, as it was absolutely not our intent to offend anyone,” the organization said. “As one of the nation’s oldest and largest humanitarian organizations, we are committed to diversity and inclusion in all that we do, every day.”

Listen, do I think the Red Cross created a poster with the goal of making some sort of statement with a bunch of racial undertones? No. But whoever made that poster should have known better than to draw it the way he/she did. People are going to be upset when most of the people misbehaving in the picture are minorities. That’s just the way it goes. But I’m not here to debate if this poster was racist, though. I’m here to make the poster that the Red Cross should have made because it would save many more lives than any pool safety poster would.

I’ve lived through the rigors of the cool/not cool political game at every level of education (sans anything after college like some nerd). But for kids that want to know what is actually cool and what isn’t cool, this is what the poster SHOULD look like. 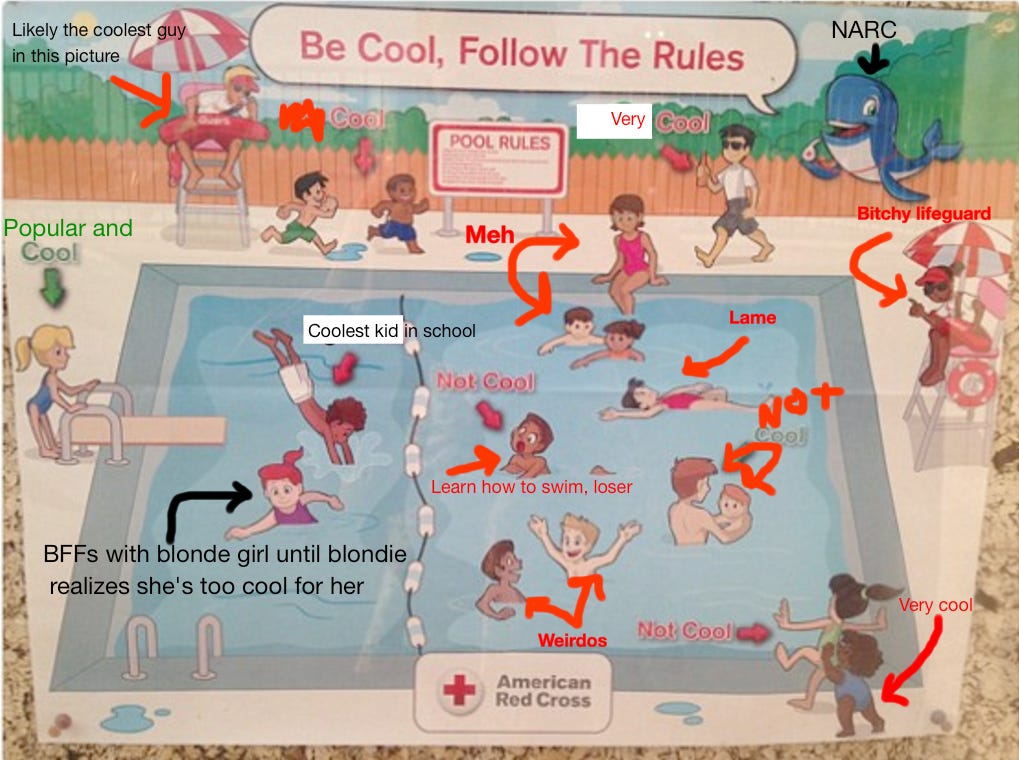 First of all, we can agree that the blonde girl that’s about to jump off the diving board has already wrapped up prom queen in the 3rd grade and that her ginger friend waiting for her to jump will be dropped like a bad habit the minute a few girls move to town and form an updated version of The Plastics. The blonde has and always will be cool. The ginger will be cool as long as she enjoys a symbiotic relationship with this blonde girl like those birds that live on top of a rhino. But once the blonde girl realizes how much cooler she is than the ginger, we will have two people going in polar opposite directions of coolness. 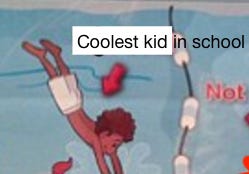 This kid is clearly the coolest kid in school. Doesn’t give a shit about the rules and pulls off a perfect dive at a young age, rules be damned. Prom king is likely for him.

The kid that is drowning is definitely NOT cool. Never has been, never will be. I grew up in the suburbs and whenever a new kid moved up from the city, he/she didn’t know how to swim. And there is nothing less cool than being the kid that can’t go in the deep end because he didn’t grow up in a place with pools. You don’t make friends with salad and you don’t get girls by living your entire life in the shallow end of the pool (literally and figuratively). 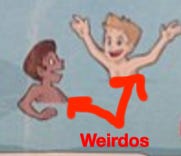 Oh look it’s the two friends that spend way too much time together! I don’t know if they still give out Frick and Frack awards to the guys that never were seen without the other one, but if they do and you won it, I have a newsflash for you. You were both weirdos in everyone’s eyes. 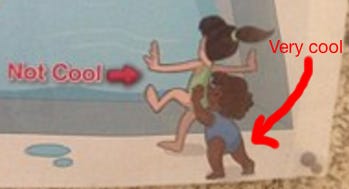 The Red Cross actually almost hit the nail on the head with this one. If you get pushed in the pool, you are indeed Not Cool. But if you are the one doing the pushing, you are very cool and bring a needed sense of danger to the party. 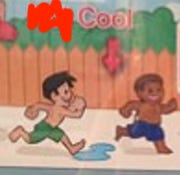 Same for if you are running around the pool. Just running for the sake of running is lame. But if you are running a fly pattern and going to catch a football in midair as you jump in the pool (must hold ball as you are underwater for it to be ruled as a catch), it is cool. Same for any good alley oop pool basketball dunks or gruesome injuries that go viral. 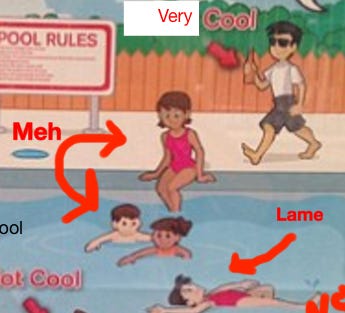 This group right here is a mixed bag. The kid with the shades and the drink seems pretty cool. If you are wearing sunglasses outside, you either are sensitive to light or you are perving a dish. I’ll say that this kid is likely doing the latter. The other four people in this picture are probably complete nobodies whose names you won’t remember (if you ever even knew them) the minute you graduate high school. Especially the chick doing the backstroke in a pool full of people. Backstrokers are the goddamn worst. 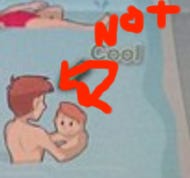 I don’t know if this is a kid teaching his younger brother how to swim or just chilling with his dwarf friend. I’ll say the jury is out for now because if you lift up your brother like Simba while singing Circle of Life, it will be pretty funny. And Tyrion Lannister’s performance on Thrones the last six seasons has kept dwarves on the Hot List. TBD on coolness level for these two.

As for the figures in a position of power on this poster: 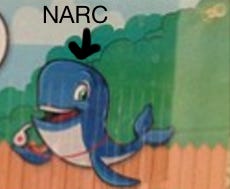 That whale definitely has the look of the RA that tells you he’s the cool RA but tries to bust you for pot the minute he smells the faintest scent of weed. Fuck him in his blowhole and all the asshole RAs that try to be cool but are truly dicks. 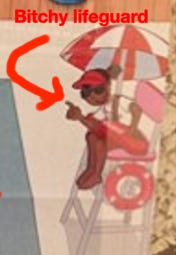 This lifeguard flat out sucks. And it has nothing with her being black. You see that finger point. Wayyyyy too aggressive for the pool area. The pool should be a place of happiness and social meetups. Not a place of anger. I like my lifeguards to be more Wendy Peffercorn and less Janice Soprano. 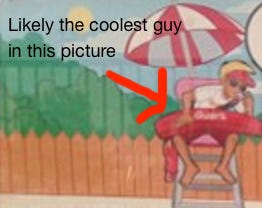 This lifeguard is clearly cool as fuck and does that “spin the whistle rope around my finger” move the entire time. The odds of this guy becoming Wooderson from Dazed and Confused is about 65%.