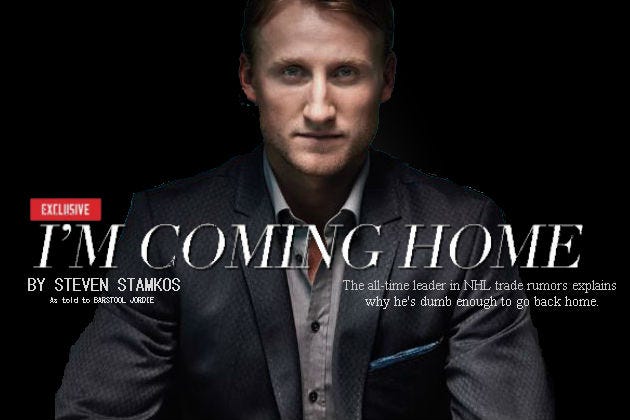 I don’t care who you are or what your thoughts are on LeBron James. What we saw last night was a man make a promise to a championship-starved city and come through on that promise. If you didn’t find yourself rooting for LeBron at least a little during that game, well then that makes you Dave Portnoy. LeBron put the entire city of Cleveland on his back and finally carried them to the top. The man is now a savior and it looked exhilarating. I don’t know how many of those tears were real and how many of them were just calculated LeBron James tears, but it looked to me that being the hero to capture your hometown team’s first championship in half a century is the best feeling in the world. Which leads us to one Mr. Steven Stamkos and the decision he has facing him starting next Friday once NHL Free Agency opens up.

It’s a rumor as old as time. Or at least as old as Steven Stamkos’ career in the NHL so far. Ever since his ELC in Tampa ran up, people have been churning the wheels on the Stammer to Toronto movement. And after LeBron proved last night that you can go back home and be the savior your city needs, well then Steven Stamkos is a pussy if he doesn’t fulfill this destiny. Between Auston Matthews, Mitch Marner, William Nylander, Kasperi Kapanen and Mike Babcock coaching them all, the Leafs have the most future potential out of any team in the NHL right now. And I know that Stamkos needs to go somewhere that he can be an automatic 1C, and the Leafs are already pretty loaded at centre. But you throw Stamkos on the top line, Kadri on the 2nd line just until Matthews gets his feet wet, and then Matthews centering that 3rd line while turning Nylander and Marner into wingers. I know there are other teams out there right now that make more sense logistically for Stamkos (i.e. Detroit Red Wings). But like I said, Steven Stamkos is a pussy if he doesn’t go to Toronto and promise them a Stanley Cup.

Hockey players love to hate on LeBron James ever opportunity they can. They love to hate on basketball players in general for being soft. Well now the tables are turned. Sure, LeBron may not be able to play throughsome little cramps. But he called his shot in Cleveland and got the job done. Are hockey payers soft and a bunch of pussies because they won’t go to their hometown team to bring them the championship they so desperately need? I guess we’ll find out on July 1st.