Congrats to LeBron James. Not.

Winning a NBA title is actually going to do more harm for the city of Cleveland than “The Decision” ever did and it’s not even close. In fact it could end up being the worst thing that could ever happen to them. James used the city of Cleveland to repair his image- one that had evolved from a hometown star with all the goodwill in the world to a south beach mercenary whose heart had receded even further than his hairline. So then like a absentee dad on Fathers day he shows up unexpectedly for one game and the entire city feels like they’re a family once again. But Poppa James option is coming up and Daddy’s about to run to the store for milk folks leaving Cleveland waiting by the window for the next 50 years. It feels like a plotline out of She’s All That Where Freddy Prince James takes the dorky girl to prom as a hilarious prank and then eventually ends up dumping her to move to LA after one magic night together. James used Cleveland by getting it dolled up, hitting and quitting, and in doing so caused a deeper scar then he did when he left in the first place.

Also Lebron James set a poor example to his own children by crying after the game. 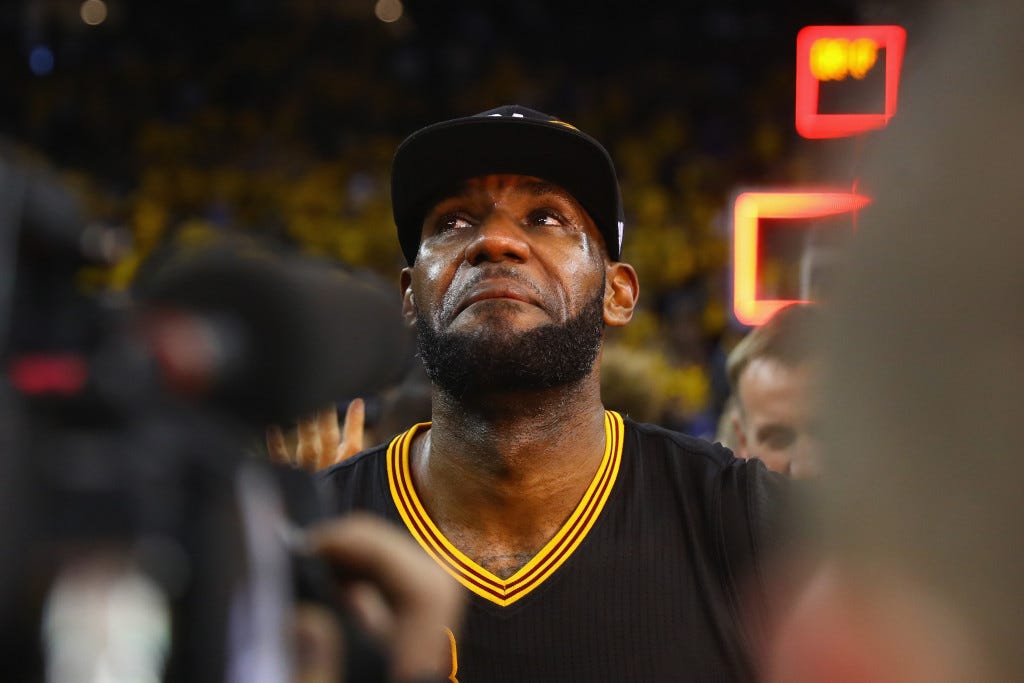 Crying is a sign of weakness. I have pretty much never cried. One time I looked up what the symptoms are of being a sociopath and it said that they don’t show emotions, so I got scared I was a sociopath and that made me cry a little bit- exactly the right amount of emotion to prove that I am not a sociopath afterall- nothing more nothing less. That’s the bleeding edge you need to be on if your an athlete. The fact that there was such a emotional release by Lebron James after winnig simply demonstrates that he didn’t expect to win in the first place- confirming all of us who thought he didnt have championship DNA. Do you remember when Kobe Bryant or Ben Rothlisberger cried after winning a championship? Me either- that’s the temperment you need to be a consistant winner and role model for your children.

Even worse, Lebron was so emotional after overcoming a historically inept foe. The Golden State Warriors are now firmly cemented as the biggest postseason collapse of all time. So now the Cavaliers have the dubious distinction of only having won the title because they beat the biggest blundering choke artists to ever take the hardwood. I dont recall the Globetrotters crying after they beat the Washington Generals, or the Germans weeping openly after marching through France. They acted like they’d been there before.

In conclusion, it is absolutely the most LeBron James thing of all time that in his biggest victory for his hometown, LeBron actually gave them their biggest defeat. Now instead of expecting misery around every turn, Cleveland’s going to walk around thinking they’re winners. And if you think they were sad before, wait til you see the dissappointment that comes with having unrealstic expectations for the Browns, Indians, and Republican National Convention.

ASJ has been on a tear with his social media accounts as of recently, and after drawing alot of unwanted attention he decided to make the big announcement that he was going to be quitting twitter for good. The amount of mental strength is must of taken for him to walk away from online is incredible.

Fast forward exactly one hour and he couldnt help himself but post about Drake and Chris Brown, which he then deleted this morning. Meaning he was back on twitter yet again this morning to delete it. Diet’s going well.

Hats off to Austin for proving that you should never quit anything ever. All you do when you quit something is you think about that one thing over and over again until you start doing it again. Thats why a vast majorty of people who try to quit drugs are addicts.

1. Steve Gleason just gets it folks. This is a guy who has lateral sclerosis- a disease which literaly means he can only go north-south instead of dancing around the tough issues. And I dont care if hes confined to a wheelchair he ‘s more of a standup comedian than you or I will ever be:

I’ll be the first to say it- Lou Gherig had a nice run but he never blocked a punt on Monday Night Football. Time to change the name to “Sean Peyton is a Pussy disease.”

2. I dont care about Michael Sam.

3. Interesting quote here from Cam Newton regarding how pleasurable his career has been so far:

Well we all knew that Newton had trouble finishing folks, but as Cam has obviously learned from David Carradine- a great fun way to intentionally delay climaxing is by choking.

Forgive me if I’m not exactly taking Pete Carrol at his word in regards to anything he believes regarding 9/11.

5. The Los Angeles Rams charged $550 to fans to meet like 6 players and hang out in a room with them. Serous question- why isn’t this prostitution? This was first reported by Jack Wang, whose name translates to “stealing computers” whose name literally translates to “Cam Newton”.

6. Lebron James spectacular dunk was actually basket interference and would of changed the game if it had been called properly.

Never one to miss a opportunity to demonstrate his suspicous athleticism, James chose to jump higher rather than jump smarter as he chased down Andre Iguadola for a highlight reel rejection. You can clearly see his arm hit the rim as he’s blocking the shot with his other hand adding fuel to the fire of the conspiracy theories surrounding the Cavs improbable comeback.

7. The biggest matchup in USA soccer history is coming tomorow night as the world gets to decide once and for all whose a better soccer player- Lionel Messi or Gram Zusi. If German history is any indication, I expect Jurgen Klinsman to sneakily defect to Argentina at halftime after falling behind.

8. Ironic how the USGA penalized Dustin Johnson for making his ball roll back but Obama roleld back race relations 50 years and no one cares.

10. People forget that Kyrie Irving was born in Australia too, making him and Delly the best outBackcourt of all time. Its a master stroke by team architect David Blatt to assemble a roster filled with actual relatives of criminals to maximize steals and their ability to get away with cheating. Anyone who can survive in their mothers pouch for 9 months in Australia surrounded by snakes, tazzie devils, spiders, sharks, and jelly fish that swim up your urethra will emerge with a toughness you just can’t replecate here in the United States, and after having lost Bogut to a nicked up MCL, the Warriors simply had no response for the Cavs Southern Crossover.

We all know that Under Armor has cursed their athletes, with their big stars of Jordan Speith, Steph Curry, and Cam Newton having a worse start to 2016 than Harambe the Gorilla. But what I submit is that Under Armor is actually cursed by Cam Newton himself. Ever since he proved that sometimes the biggest dives are the ones you don’t take, Newton, Speith and Curry are competing about as feroucously as the French army so I call these triplettes Les Miserables.

So Cam should repay Under Armor shareholders for causing irreperable harm to the brand. Cam should feel right at home as the subject of yet another SEC investigation. 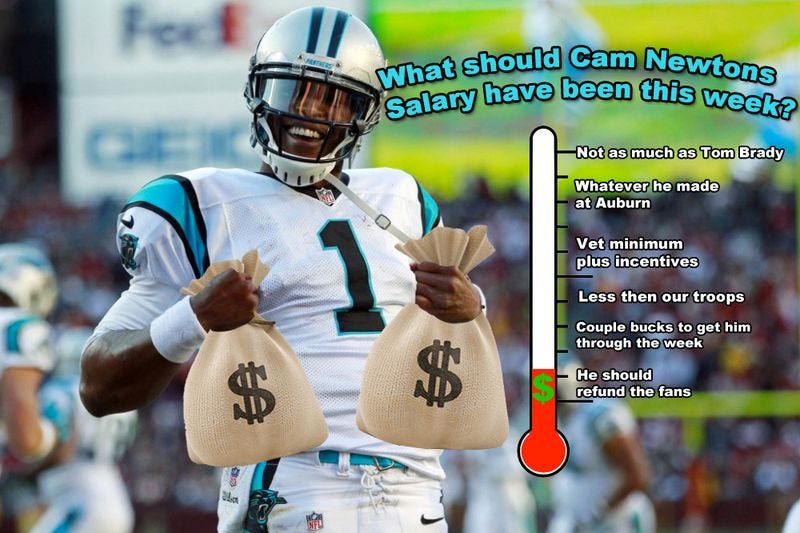 This weeks rating is: He should refund the fans

69 of the week: RIP Billy Bob. You taught me everything I ever learned about concussion protocol.