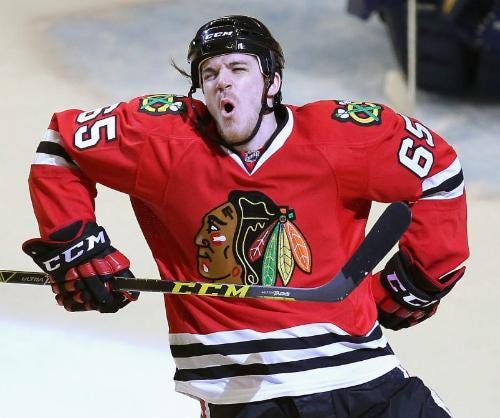 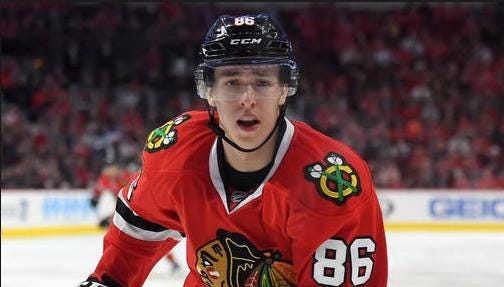 Since the Bickell-Teravainen to Carolina trade last week I’ve many tweets and a few article in town saying the Blackhawks made a big mistake trading Teravainen. Now, I don’t want this to turn into a blog where I have to be the guy that hates Turbo because I don’t (even though I was pretty down on him last year). He’s young and obviously very talented. In an ideal world(one where a socialist/communist style salary cap didn’t exist) the Blackhawks would never have to trade Teravainen. Just as they wouldn’t want to trade Byfuglien, Ladd, Versteeg, Bolland, Leddy, Campbell, and on and on and on. The reality of the situation is that the Blackhawks are once again up against the salary cap because they have some of the best players in the world and champions on their team. Having great, high-paid players means the Blackhawks have to make tough decisions about role players like Andrew Shaw and Teuvo Teravainen.

Presumably the Blackhawks chose to keep Andrew Shaw(I still think there’s a good chance the Hawks trade Shaw too) over Teravainen. While their production is almost identical on the score sheet, anyone with eye balls can tell that Teravainen has more talent. Just because a guy has more talent doesn’t mean he is more valuable. Its been proven, by the Blackhawks and other teams, that you need all types of players to win in the playoffs. You can’t bully your way to the Stanley Cup and you can’t finesse your way either. Sometimes you need a scalpel sometimes you need a fucking hammer. Shaw is the hammer. It’s important to have skilled players, but you also need guys who can go and retrieve the puck for those skilled guys. The Blackhawks have a number of guys capable of making beautiful plays and scoring from the perimeter. If the Hawks hadn’t signed Panarin, then they don’t give up Teravainen. Panarin simply took the top-6 brass ring that Teravainen never seemed to be able to grasp last year. Panarin became the priority for the long run because he’s simply a better and more consistent player. Panarin, along with the development of other smaller, skilled players like Schmaltz, Motte, and Hinostroza(who are all also more cost effective in the near and far term) made Teravainen expendable.

The Blackhawks know their organization better than any media member. They know the value of Shaw both on and off the ice. That’s why Bowman, Coach Q, and Jonathan Toews have all stressed his importance to the make up of the team. Just because some of Shaw’s best attributes can’t be quantified, doesn’t mean they aren’t valuable. Shaw keeps his team loose and the other team on edge. He is a hard guy to play against. And just because Ryan Hartman is a similar size and has a mean streak to his game doesn’t mean that he can slide into Shaw’s role and be equally as effective. They are different personalities. That’s fine to ignore if you’re making a team on NHL16, but locker room dynamics is something real GMs and coaches have to consider and its obvious that Shaw is an integral part of the team.

Hopefully this Teravainen trade will allow the Blackhawks to retain Shaw and bring in another veteran to fill out the roster.

And some comboniation of Schmaltz, Hartman, Hinostroza, Weise/Fleischmann and the Hawks are ready to roll again. I’m sure Teravainen will be a nice player in this league for a long time, but this was the right trade at this time for the Blackhawks. It gave them the most important asset in today’s NHL: Cap flexibility.

PS: I also have serious doubts about Teravainen’s ability to be a top producing player on a good team. It’s why I was hard on him in the blog all season. He was too tentative on the ice last year. Maybe it was a confidence thing, but maybe that’s just who he is. You don’t have to be big or physical to be aggressive. Kane, Gaudreau, Panarin, Zuccarello, Cam Atkinson etc…all of those guys are small players who are aggressive and assertive. Teravainen is timid in comparison to his peers. That, combined with the fact that there are a lot of whispers circling about a lack of work ethic from Teravainen. It was apparent on the ice at times, and its probably why he found himself in Coach Q’s dog house on occassion. Some guys just don’t have the chest. Maybe Teravainen will mature, and grow, but the Hawks don’t have the time to wait.