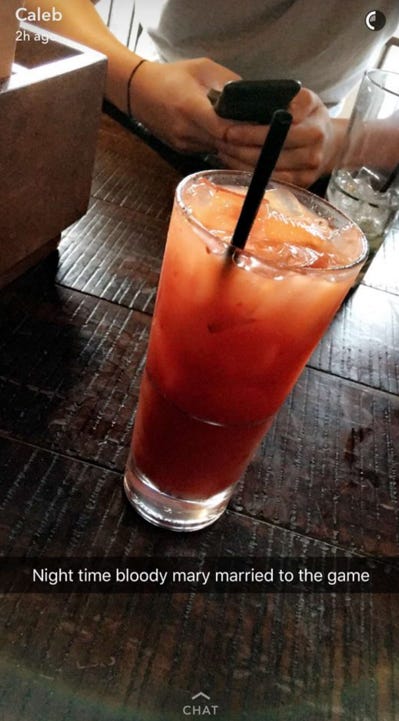 Just casually ordering a bloody mary during dinner on a Thursday evening. You can’t teach that.

Back in January I declared drinking bloodies at times other than brunch the best decision I’ve ever made. Why should society dictate when I drink a delicious alcoholic beverage? Do you think Columbus let people dictate when he founded new worlds? For sure not. And as it turns out, Caleb is right on board. Daddy Dixie himself, a night time bloody mary drinker. Welcome to the club, help yourself to the complimentary snacks.

I have a feeling this is all going to come to fruition in New York. Why? Because the GChat Gang is old school. They aren’t bad boys for life like myself and Daddy Dixie: 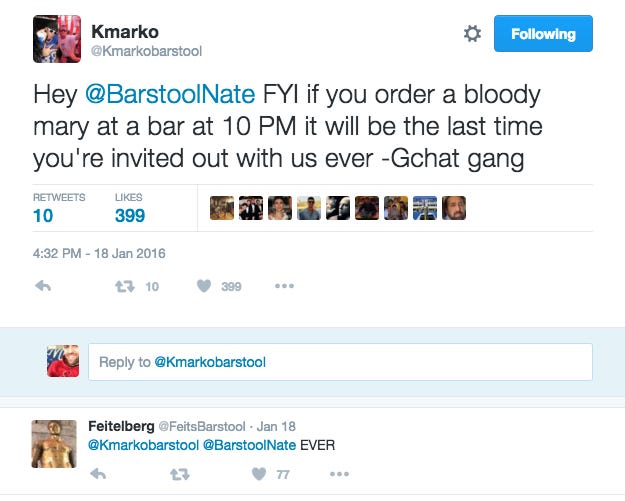 Look, I respect Kmarko and John’s opinions on many topics. But they are the old man shouting at the clouds when it comes to this. They are the baseball scout in Moneyball who doesn’t believe in statistics. Gotta get with the times, because they are a changin. This is a revolution and you want to stand on the right side of history. It’s going to happen with or without you, Eduardo, so you better go on board or you’re going to get left behind.

PS: I didn’t hear it but apparently Dan Patrick talked for like 10 minutes last week about how he just started drinking them and he mixes them up at his house at like 9pm for a cocktail on a random Tuesday night. Welcome to the team, Patrick. Glad to have you with us.