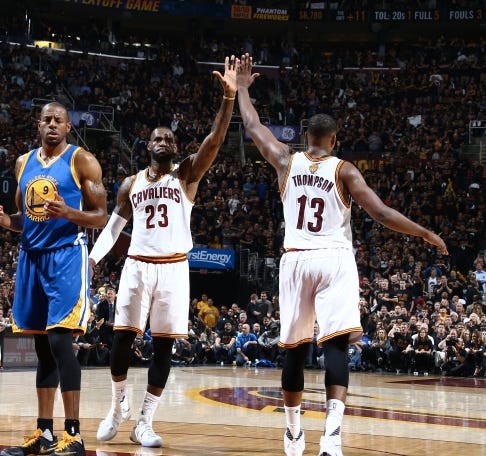 Much like 99.9% of the world, I was certain this series was a wrap once Cleveland got down 3-1. They looked awful, and in no way capable of slowing down the Warriors. What’s happened since Draymond’s dick punch has been nothing else but spectacular to watch. I cannot express how much it pains me to type that. After being called a bitch or a fuck boy (depending on what story you believe), Lebron backed up his 41/16/7/3/3 performance in GM5 with a 41/8/11/3/4. He’s turned the ball over just three times. It’s clear, Lebron has figured GS out. I didn’t think it was crazy to think that Draymond Green would make a difference, being a first All NBA defender, but that’s clearly not the case. Everything we love to hate on Lebron about, his shooting, his choking, all that shit, he’s making us eat our words. You can hate Lebron for what he does off the court, but on it, and especially in this Finals, you have to tip your cap and admit you are seeing something pretty special.

After Game 6 in 2012 I didn’t think we would see Lebron play a game of that caliber again. Its now happened in back to back games against a team full of basketball aliens. Through these last two games Lebron’s been able to knock down his outside shot on a consistent basis (he was 3-6 from deep last night) and once you have to come out to play him, he blows by you. On the offensive end they helped Lebron by setting a ton of screens for him so that Iggy would have to switch, and then he’s left to post up Steph Curry. He wins that battle. The Warriors came out and challenged Lebron, and he’s come right back in their face and made a statement. You don’t think there is some personal motivation for him to outplay Curry? Some might not say that block wasn’t all that impressive, that big deal Curry is 6’3, but anyone who has played knows that’s the exact reaction you have after a play like that. To me this series has turned into Lebron reminding people to pump their breaks when saying Steph Curry is the best player in the league. How big was his impact? Well 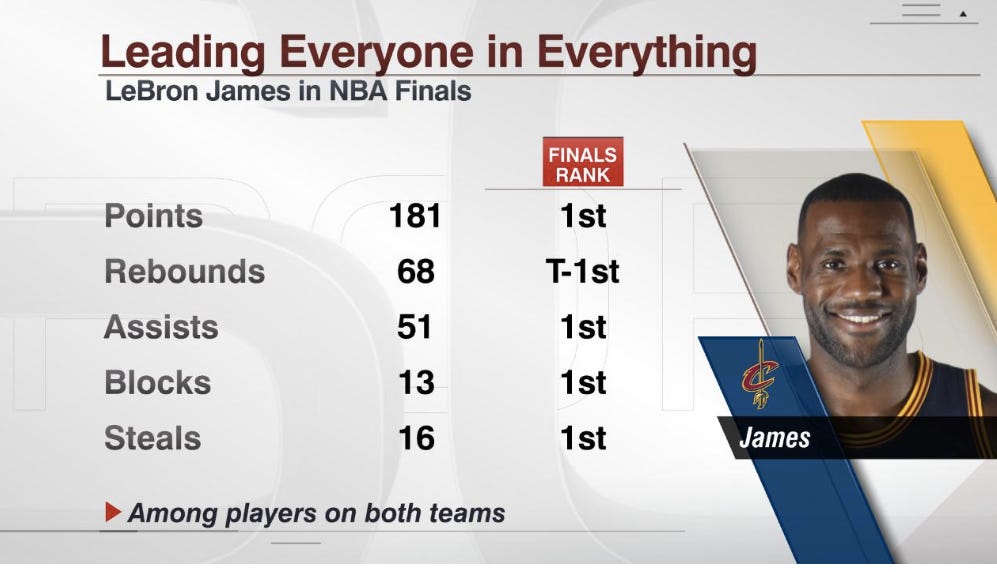 Following Lebron’s lead, the Cavs came right out and blitzed the Warriors. A 13-2 lead just 6 minutes into the game, and at no point did GS have a lead. CLE simply played harder, and that shows up all over the box score. GS was crushed on the boards, lost the fast break battle, got dominated in the paint, and turned it over 14 times. As a team GS shot just 40%. Let’s not forget to mention the fact that GS had no answer for Tristan Thompson either. Performances like this are why he got his money. You’ll never run a play for him, he scores almost exclusively on dunks and put back layups, but going 6-6 and throwing up 15/16 is probably best case scenario for him. That’s the thing about this Cavs team. They are GREAT when they have a lead. What I mean by that is with their style of play, they won’t come back from many deficits, but once they get out in front, thats when the momentum threes come from JR, and they are a very hard team to catch. Even if you’re the Warriors.

And you know what? The fact that the Cavs forced a Game 7 isn’t even the craziest part of this entire Finals. Is America turning on Steph Curry?

Did I find it suspicious that in a Scott Foster game Curry had two early fouls? Maybe. But what I know for sure is that for as great as the Warriors are, they CRY when they lose a game or something doesn’t go their way. News to GS, Lebron James gets calls at home in the playoffs. He has for about a billion years. I’m all for a good NBA conspiracy, but I’m not quite buying it for GM6. The refs didn’t make Harrison Barnes miss every shot he took. They didn’t hold Green to just 8 points. Despite his foul trouble, Curry still played 35 minutes and had 30 points, so forgive me if I don’t sympathize with him. I could understand if CLE lived the entire night at the line, and you got nothing, but it was a 32-29 split, which is almost unheard of during a Lebron home playoff game. So Steve Kerr, stop whining

And that goes for Steph too

This wasn’t the refs fault. Instead, why don’t we focus on the fact that Steph again was careless with the basketball. Four turnovers and one assist? He shot the ball well, so I don’t want to hear anything about being injured, but someone is going to have to explain to me how he can let Kyrie Irving average more assists than him, and Kyrie doesn’t pass. In addition to Curry’s struggles, his backup isn’t having much success either. Shaun Livingston is missing, and since his 20 point effort in GM1, he hasn’t scored more than 8 points in a game since. I’m not sure that’s being talked about enough, because for them to win on Sunday, he’s going to have to contribute.

When you factor in his little temper tantrum, and the tweet from his wife, last night might have been the tipping point for people with Steph Curry. Talk about sour grapes. What I loved about that tweet is now apparently the league that has made her husband a superstar and millions of dollars, is now all the sudden rigged against him. High comedy. With Steph, obviously he’s still an incredible player, but I haven’t seen that much hate on him maybe ever. If it was Lebron that threw his mouthguard at some fan in the stands, the internet would have melted. All that stuff is fun to joke about, but I think he deserves just as much heat for actual basketball reasons. Dropping another chance to close this series out, giving the Cavs all the momentum in the world is the type of shit we usually kill guys for. Especially back to back MVPs.

I wrote back when the series started that I thought the Warriors would win in 7 games, and I still think that happens. Can the Warriors really lose 3 in a row to lose the Finals at home? I can’t see it. It hasn’t happened in the history of the NBA, but at the same time they have no answer for Lebron. This has gone from a fairly boring series to must watch, edge of your couch, appointment television. Going up against Thrones is a disaster, but just think of what is at stake in this game. GS caps off a 73 win season with a ring, cementing their legacy. Curry wins his second ring, and we shift to talking about a threepeat. For Lebron, he wins his third ring, makes a case for passing Bird as the greatest forward of all time (I’m going to be sick), and ends a 52 year drought. I think we all know how this story ends, but anything can happen. I can’t think of bigger stakes. Game 7, the best fucking thing in sports.