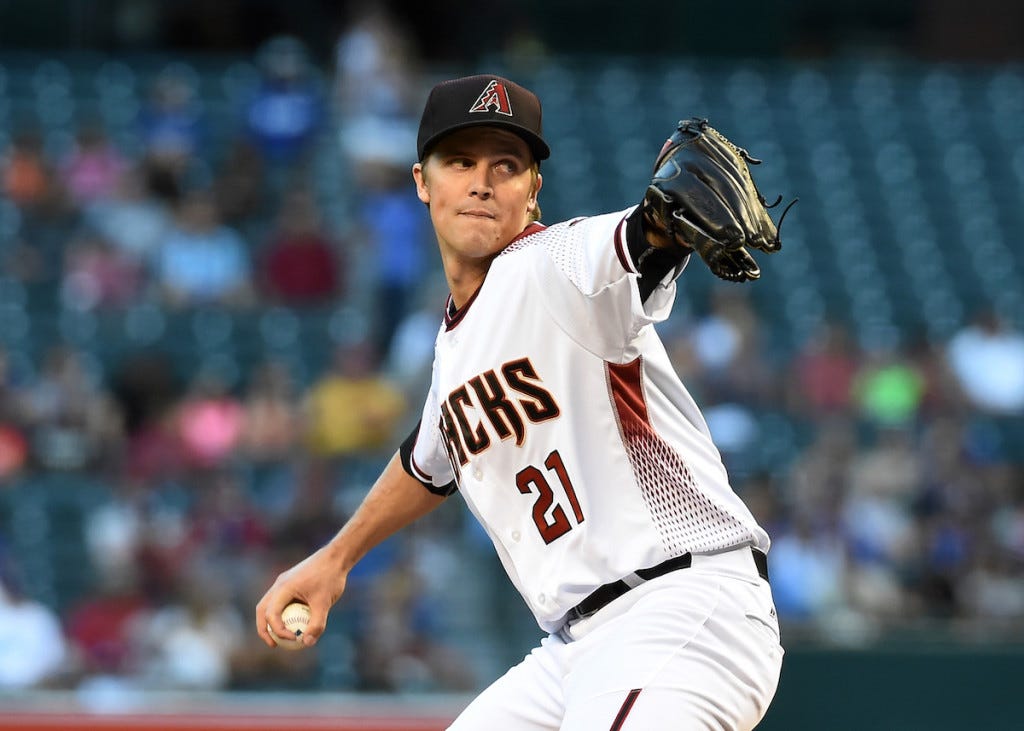 They got me. I bought in. I thought the Arizona Diamondbacks were going to be a contender this year.

And it wasn’t just because they added Zack Greinke to their rotation, making him the highest paid pitcher in baseball history by average annual value. They already had a ton of talent in place, and adding the likes of Greinke and Shelby Miller was supposed to only help that. The AJ Pollock injury certainly didn’t help, but it also isn’t the only, or even the biggest, reason why the Diamondbacks are 8 games under .500 and 10.5 games back of first place in the National League West.

To start the season, Greinke was part of the problem. Over his first five starts, the 32-year-old had a 6.16 ERA, and opponents were hitting him at a .305 clip. Since then, the right-hander has a much more respectable ERA of 2.57 over his last nine starts, while opponents are hitting just .228 against him. While his performance since his terrible first five starts has been pretty good, he’s been excellent as of late, recording a 0.78 ERA over his last three starts with 19 strikeouts in 23 innings.

With the Dbacks falling further and further out of contention in 2016, and with Greinke’s recent resurgence, Arizona would be wise to listen to any offers for him at the upcoming trade deadline, no? Teams like the Red Sox have to get creative. Rich Hill has pitched more than 100 innings in his entire career once, which was in 2007, and he’s also been dealing with injuries. The early whispers are that the Red Sox don’t have much interest in Julio Teheran of the Atlanta Braves, and Sonny Gray is batting both injuries and poor performance this season, despite pitching well his last two times out.

Greinke makes a ton of sense for Boston. Think of it this way — Red Sox fans are obsessed with their top prospects, right? Yoan Moncada, Anderson Espinoza, Andrew Benintendi — Red Sox fans would rather give up their first-born child than one of Boston’s top prospects in a deal for a pitcher. Not saying that Greinke would be a sure thing here, but he’s gotta be the closest thing to it on the market, assuming he’s available. Factor in that he’s making a shit ton of money, and the Red Sox being one of the only teams who could take a contract like that off of their hands, and it sounds like a match. The more money that Boston is willing to assume, the less it’s going to cost you to acquire said player.

The Boston Globe’s Chad Finn wrote a column two days ago about the top 10 pitchers that might be of interest to the Red Sox. In it, he mentions Greinke, and links to an article from FanGraphs’ Dave Cameron, who had the following to say about a potential Greinke to Boston trade.

The Red Sox would probably be the first team to call, with Clay Buchholz demoted to the bullpen, Joe Kelly remaining maddeningly inconsistent, and Eduardo Rodriguez raising some concerns with mediocre performances during his rehab. The Sox could certainly use another quality starter, and have the financial capability to take on most of Greinke’s remaining contract; adding Greinke to David Price would give the team the best chance to send David Ortiz off in style this October. With Buchholz wanting to start, a deal centered around swapping him and Greinke — with Boston sending other pieces as well, depending on how much of the contract Arizona wanted to keep on their books — could potentially benefit both sides.

Sign me up. No, seriously. Sign me up right now. And if you’re wondering about Boston’s interest in Greinke, how quick we forget that the Red Sox were going to sign Greinke if the deal with David Price didn’t end up working out.

The Red Sox were also in negotiations with Greinke, according to a high-ranking team official who asked not to be identified due the sensitive nature of negotiations.

Greinke’s representative, Casey Close, told Red Sox president Dave Dombrowski that he wanted an answer by Tuesday night on whether the team would agree to Greinke’s contract proposal. Greinke is also being courted by the Los Angeles Dodgers and San Francisco Giants.

Dombrowski, wanting to make sure that he would land one of the two pitchers, then went to Price’s agent, Bo McKinnis, early Tuesday with an increased offer and said the Red Sox needed a decision from Price by Tuesday night.

Now, let’s fully recognize that bringing in another starting pitcher over the age of 30, who’s making record-setting money, is a huge risk. I think we can all agree on that. But I wrote about this winter’s free agent class for starting pitching, and it absolutely SUCKS. That’s an understatement, if you can believe it. If you want to win a World Series in 2016, and you need starting pitching, there are zero slam dunk options for you on the trade market, and it gets even worse if you’re looking to upgrade for 2017 via free agency. It’s David Ortiz’s final season. The window is about to close. This is one of the greatest offenses that the Boston Red Sox have ever had. If they plan on winning one final World Series with David Ortiz, all while protecting their top prospects, then perhaps the Arizona salary dump/Greinke trade route is the way to go.