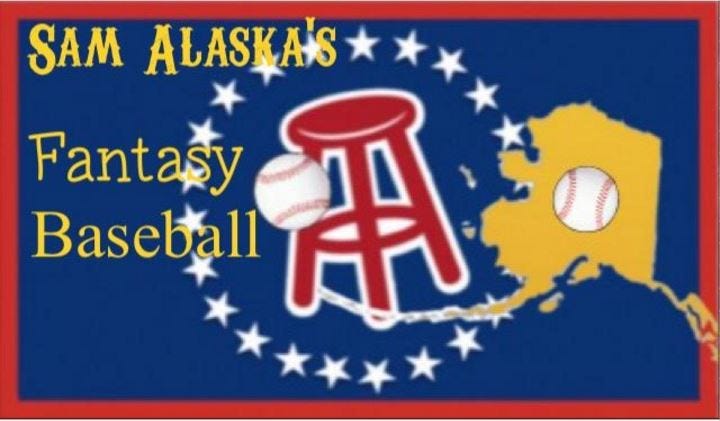 Its been a while since my last fantasy baseball piece so I’ll try to make these more consistent. Considering the time between posts, lets see how I did last time. All statistics will be from April 26th until now. The blog dealt with 6 guys you should add or trade for and 6 guys that you would be better off trading away (because their value at that time was deflated). Skip down to “Some Pitchers to Add” for the new content. Send questions directly to my email (that could be answered later on on the blog) at SamAlaskaBarstool@gmail.com or Follow @SAlaskaBarstool

Since my recommendation, Eduardo Nunez has hit .311 with 8 steals and 7 homers in just 32 games, huge win for someone you could’ve picked up for free. The future All-Star (each team needs one and Nunez is likely the Twins’ pick) is still available in 38% of leagues. I wouldn’t trade for him right now but if he’s available on waivers, add him up quickly. Miguel Sano (8 HR, low BA  but is currently injured but a great trade option in dynasty leagues) is a Loss as is JA Happ and his 4.17 ERA (still add him if you need another pitcher). Odubel Herrera has hit .336/.426 with 3 homers and 3 steals a piece. That’s a win. Jon Gray is a very interesting case because since I recommended him, he has a 4.94 ERA but he has also struck out 9.7 batters per inning and has looked great in 6 of his past 7 outings. If Gray is still available, add him now. I can’t call this a win because of the ERA but Gray’s assistance in other categories make it impossible to say its a loss. Draw Drew Pomeranz has a 1.88 ERA and 9.6 Ks/9 since my recommendation, a clear Win though there is more on him later.

So far, I have 9 wins, 2 losses, and a draw (I’ll continue to keep track even if my predictions start to fail though I’ll wait about a month before determining the result)

SOME PITCHERS TO ADD 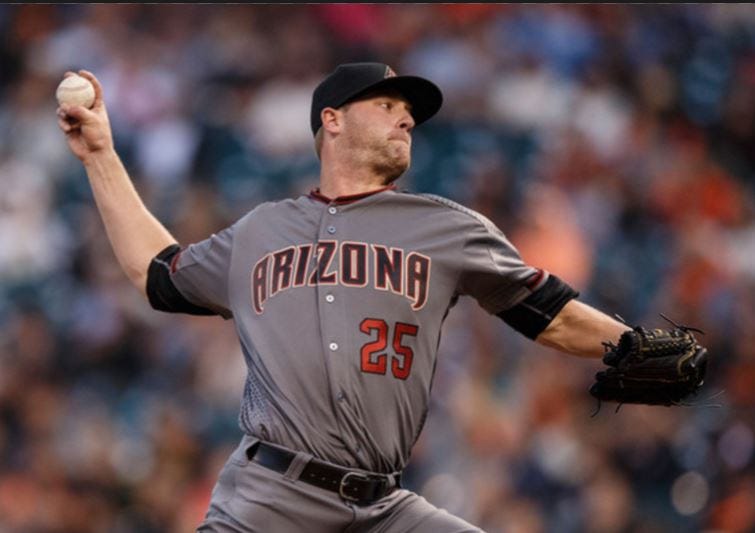 Michael Pineda has been awful. Really awful but we forget that he is a 6’7 beast who has had success before. Pineda really struggled with the long-ball but if you regress that closer to what it has historically been, suddenly he doesn’t look so bad. Pineda’s Left on Base % is alarmingly low (17th worst in all of baseball) and his opponent BABIP is way too high based on how he pitches to be anything other than rotten luck so far. Pineda will have to reign in the fly balls (only 1.7% of batted balls are infield flies, much lower than his career rank of 10.1%) but his last outing (5.2 IP, 1 ER, 0 BB, 8 Ks) gave us a glimpse of the good side of Pineda. Buy low here. (Update – Pineda had a strong start, going 7 innings and allowing 3 runs on 6/7)

Archie Bradley had been one of the top pitching prospects in baseball as recently as last season before he was called to the bigs in April. Bradley was pretty good through his first few outings until he got hit in the face with a liner, spent some time on the DL, and absolutely shit the bed whenever he faced MLB batters again. Well, Bradley is back and he’s got a spot in the D-Backs rotation and the walks are way down. Bradley has always surrendered a few too many walks and ultimately this weakness is going to be a flaw that probably sticks with him throughout his career. Archie has got good stuff and since joining the rotation full time, he’s thrown 13.1 IP allowing just 8 hits and 3 unintentional walks, 4 runs and 19 strikeouts. He has been good and when you’re deciding on who to add, Bradley has some of the best upside out there and he might finally be harnessing it. (Update – Bradley scuffled through 5.2, allowing 4 runs and walking 4 batters on 6/8; I still recommend him but be very vigilant of the walks)

James Paxton replaced the aforementioned Felix Hernandez in the rotation and the one big knock against this guy is that its possible his time in the starting 5 is temporary. Paxton wasn’t too good in the first inning of his first start but has really settled down since then. In 2 outings, Paxton has allowed 4 earned runs in 9.2 innings while striking out a pretty ridiculous 17 batters. He was much better in the 2nd start (6 IP, 1 ER, 10 Ks) but regardless of the statistics, the thing that should draw you to Paxton is his velocity. Paxton is a lefty that can throw 100 MPH as a starting pitcher. His average velocity in the two starts is 97.6 miles per hour AS A LEFTY. The 27 year old has dealt with various injuries but in his 32 career MLB starts, he has a pretty own-able 3.19 ERA. 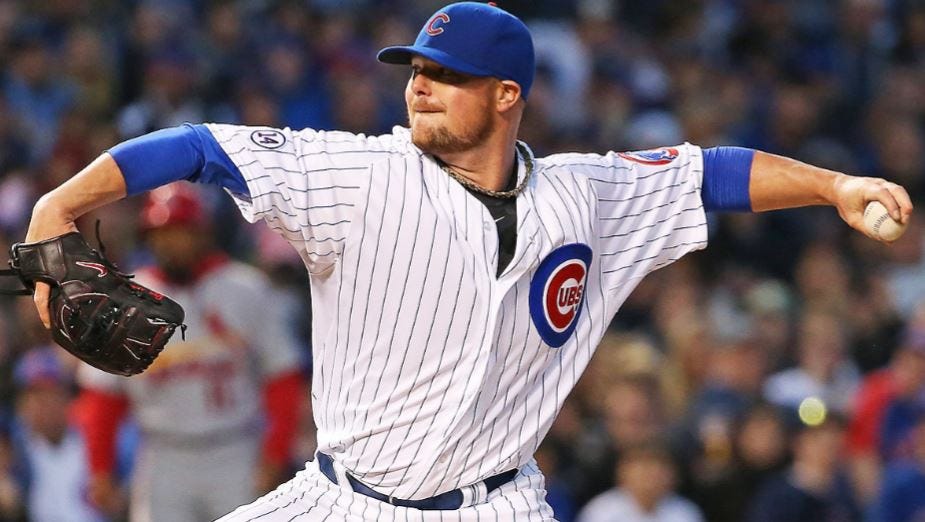 You may think Jon Lester has an ERA right around 2.00, is striking out nearly a batter an inning, has never walked fewer batters per 9 innings, and is pitching behind be best offense in baseball, why would I ever trade him? The answer is because he is good but not this good. 7 of Lester’s starts have come against the Reds before they got hot, the Braves, the Padres, the Phillies, and the Dodgers offense after they got ice cold. Further, Lester’s Left-on-Base% is the highest in baseball (signalling a coming regression). Lester is still a very good pitcher even when he faces more talented opponents or with a league average LOB% so don’t settle for any offer but try your best to sell high and get some real assets for him before he reverts back into a very good but not Cy Young-level starter.

Cole Hamels has struggled with keeping the ball in the yard all season and part of this is because of his new home park in Texas and part of it is because batters are absolutely bashing every flyball they hit off of him. I had mentioned Pineda above and if Cole Hamels’ 4th best in baseball LOB% regresses a bit and batters start homering when runners are on base, Hamels could look a lot more like April and May Pineda than a lot of owners would want. Hamels has surrendered an astounding 5 SOLO homers (and 7 total bombs) in his past 4 starts and if he starts giving those up with a runner or two on base, all of a sudden he looks nothing like the dominant Hamels of old. There is a lot of room for regression in Hamels and his downside could turn him into a pumpkin. Don’t trade too low but, if you can get a valuable piece for Hamels, pull the trigger. (Update – Hamels went 7 innings, allowing 1 homer and walking 4 on 6/7; everything written about Hamels stands)

Drew Pomeranz is my 3rd sell which might seem a little bit weird considering I ranked him as a ‘win’ in the buy column from my last post. Pomeranz has been great but the ship isn’t staying afloat all season and I’d much rather get off the ship a bit early than wait for it to sink. Pomeranz is walking 4.3 batters per inning and ERA indicators such as SiERA claim that his ERA should be closer to 3.73 than the 2.22 that it is currently sitting at. Pomeranz has never thrown more than 150 innings in a season and that was in 2012. Pomeranz may be a stud for another month but eventually I think he is going to break down. When trading Pomeranz, value him highly and incorporate his home stadium (Petco) and the fact that hitters struggle to hit line-drives off of him (2nd lowest line drive % among all MLB starters) but if you can get an offer for a proven starter or a top bat, complete the deal. (Update – Pomeranz went 5 innings, allowing 3 runs on 9 hits on 6/8; 9 hits allowed against the Braves isn’t good)
Follow @SAlaskaBarstool