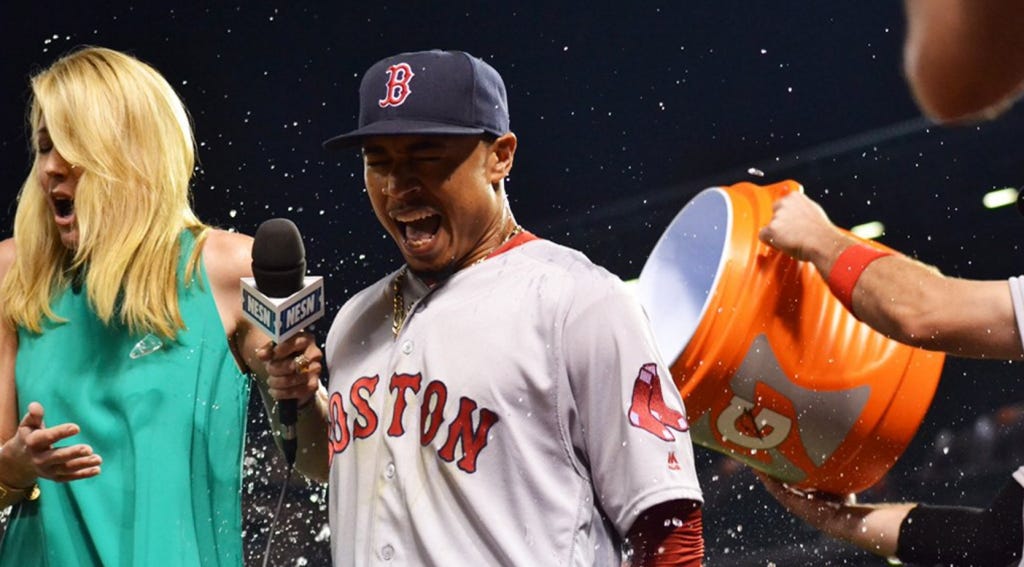 Tuesday night at Camden Yards was the Mookie Betts Show, and we all had a front row seat.

Betts came into the second game of a four-game set in Baltimore with 9 home runs on the year, and left with 12, after the first three-homer game of his career, and the 27th three-home run game in Red Sox history. The 23-year-old right fielder hit one out to left field, in addition to hitting a home run to centerfield for the first time in 2016, and also hitting the first opposite field home run of his career. According to Elias Sports Bureau, this was also the first time that a Red Sox leadoff hitter has ever hit three home runs in a game.

Oh, and he also did this, too.

And because Jackie Bradley Jr. was away from the team on paternity leave, being Jackie Dadley Jr., Chris Young got the start against a right-handed pitcher in center, and did this to poor Manny Machado.

Xander Bogaerts extended his hitting streak to 24 games with a bloop single into shallow left field. I guess if you’re looking for something negative to say about Bogaerts, then we can go with “this ends his streak of three consecutive games with a multi-hit game, and he had to settle for a 1-for-4 night.” Dustin Pedroia also went deep on Tuesday night, following up Mookie’s leadoff home run in the first inning with a solo shot of his own to give him seven on the year.

After Tuesday night’s victory, the Red Sox now have seven players who are hitting at least .280 and have driven in at least 25 runs. The Orioles have two, and the Blue Jays, Yankees and Rays have zero.

Radio plug: I’ll be talking Red Sox with Zolak and Bertrand today at 10:50am on 985 The Sports Hub. LISTEN LIVE HERE.