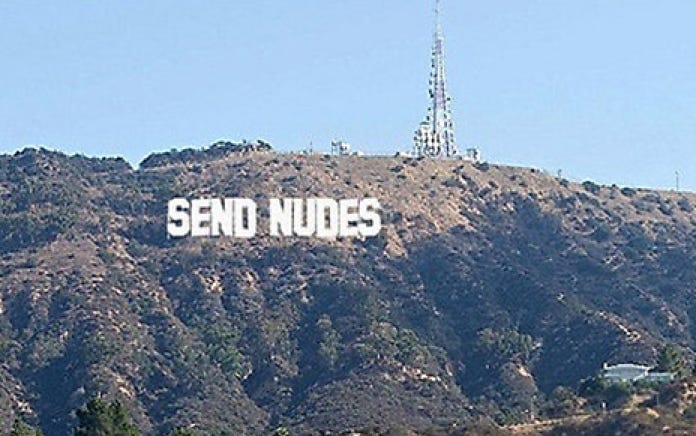 Twitter has made every day an “(insert something pointless) Day.” You log-in on any of the year’s 365 days and you’re going to be greeted with some stupid shit like that trending: Taco Day, Sibling Day, Pet Day, Dog Day, Call Your Grandma Day, Do 15 Pushups Day, etc. etc. They’re very often extraordinarily ridiculous and the only form of entertainment they provide comes from how much they piss Hank off.

But, even a blind squirrel finds a nut and even a hashtag trend can find meaning. Today, we’ve gotten just that. National Send a Nude Day. We made it! A hashtag cause I can finally get behind. Nudes and the Ice Bucket Challenge, pretty much the only two times in Twitter history that it’s been used for good.

Now, I’m not a fool. I know 99.9% of people aren’t going to send a nude just because Twitter says so. But you know what 99.9% isn’t? It’s not 100%. There’s still .01% of the population who trust the internet with every fiber of their being and do whatever it says. If you’re smart, you’ll send out a couple of jokey feelers today.

“Haha did you hear it’s National Send a Nude day? So ridiculous.”

“I know, right? Ohhh you have to send me a nude because the internet says so! Twitter commands you!”

“Haha everyone’s such a sheep.”

“It would be funny if you sent one just to prove how stupid it is. ‘Oh yeah the internet says I have to do this so I guess I will.’ Like do it ironically.”

“Hahahha it so would.”

BOOM! You just joked your way into ironic nudes. Longshot? Perhaps. Worth a try? Definitely. Tell your girl that it’s a national holiday and, much like a charity 5k, it doesn’t really matter how you participate as long as you do. Text it (that’s what real ones do), snap it, DM it, inbox it, whatever you want. But be a part of something. Be a part of national send a nude day.