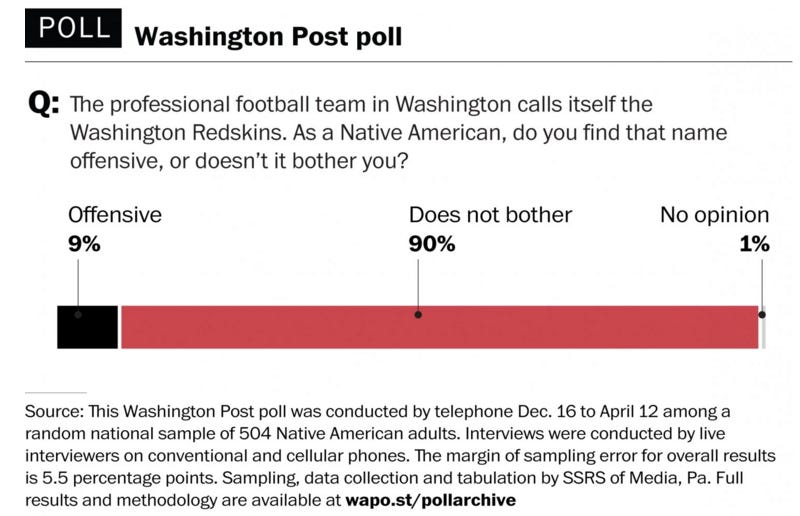 Ah yes. The flowers are in full bloom. The weather is warming up. And talk about the Redskins name takes over Redskins Twitter. All the signs of the NFL offseason are officially here. Not an offseason goes by when there isn’t massive debate over the Redskins name- is it racist? Is it offensive? Should sports teams use depictions of races of people as mascots? It’s a never ending debate, complete with lawsuits, with passionate people on both sides of the aisle forever clashing.

Today was a big win for the “don’t change the name” folks as a Washington Post poll shows that 90% of Native Americans polled are not bothered by the name.

WaPo - The results could make it that much harder for anti-name activists’ to pressure team officials, who will almost certainly use the poll as further justification to retain the moniker. Beyond that, the findings might impact the ongoing legal battle over the team’s federal trademark registrations and the eventual destination of the Redskins’ next stadium. The name controversy has clouded talks between the team and the District, widely considered owner Daniel Snyder’s desired destination.

Since the nearly half-century-old debate regained national attention in 2013, opponents of the name have won a string of high-profile victories, garnering support from President Obama, 50 Democratic U.S. senators, dozens of sports broadcasters and columnists, several newspaper editorial boards (including The Post’s), a civil rights organization that works closely with the National Football League and tribal leaders throughout Indian Country.

Still, Snyder has vowed never to change the moniker and has used the 12-year-old Annenberg poll to defend his position. Activists, however, dismiss the billionaire’s insistence that the name is intended to honor Native Americans. They argue that he must act if even a small minority of Indians are insulted by the term — a dictionary-defined slur. They have also maintained that opinions have evolved as his unyielding stance has been subjected to a barrage of condemnation by critics ranging from “South Park” to the United Church of Christ.

The eye-opening part of this poll is while the change the name movement has caught on heavily in the mainstream, it doesn’t appear to have changed the thoughts of those the mainstream think they are protecting- the Native Americans themselves.

Even 9 in 10 of those who have heard a great deal about the controversy say they are not bothered by the name. What makes those attitudes more striking: The general public appears to object more strongly to the name than Indians do. In a 2014 national ESPN poll, 23 percent of those reached called for “Redskins” to be retired because of its offensiveness to Native Americans — more than double the 9 percent of actual Native Americans who now say they are offended by it. A 2013 Post poll found that a higher proportion of Washington-area residents — 28 percent — wanted the moniker changed.

I’ve written multiple times that I think it’s very weird for a team mascot to be a dictionary defined slur. But at the same time, I’m not Native American, so I don’t think I really should have a say in the matter to begin with. There are many Native Americans who do find the name offensive- and they are often out there protesting before football games 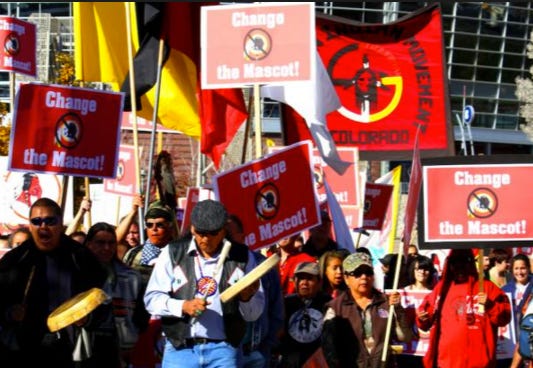 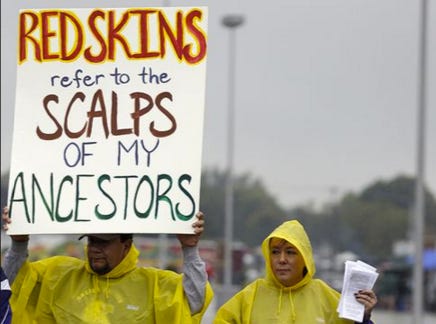 That’s the tricky part of it- there are people who the name “Redskin” has a negative connotation with. 1/5 find it disrespectful, while the majority do not. 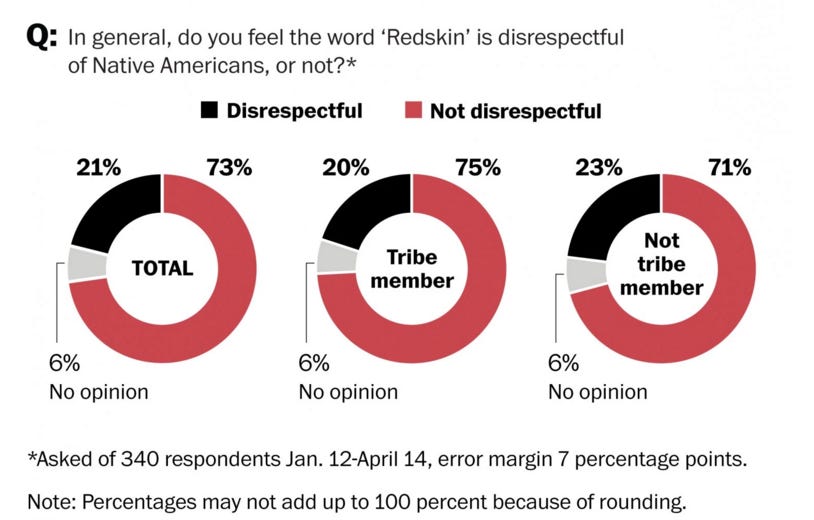 I think the major takeaway from the polls and article- Natives just don’t really care one way or another. It’s just a football team name to them.

“The name is nothing to me,” said Jarvis Michael Horn, a 39-year-old member of the Winnebago Tribe who works at a corner grocery store in Iowa.

“For me, it doesn’t make any difference,” said Charles Moore, a 73-year-old Oneida of Wisconsin who as a physician treated patients for four decades before retiring in Minnesota.

Rusty Whitworth, 58, is a member of the Confederated Salish and Kootenai Tribes. A laborer who has worked on ranches most of his life, he does not mind the name. “Just let them keep it,” he said of the team. “It ain’t hurting nobody.”

Dan Snyder is on record time and time again as saying he won’t change the name. There are lawsuits, there are protests, and there are people threatening to hold back funding for a new stadium if the name isn’t changed. And again, there are many Native Americans who are bothered by the name, just not the majority. While this poll is a strong case against changing the name, I don’t think the battle or fight simply stops here. Maybe a compromise can be reached- like the Redskins keep the name, but white people stop dressing up like this. 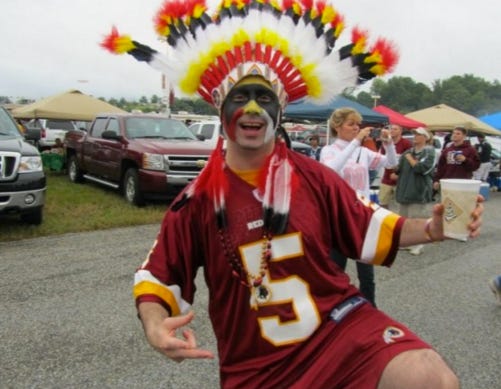 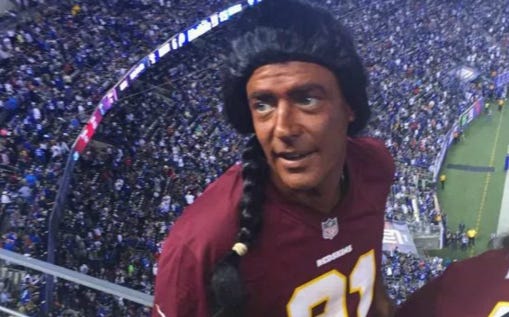 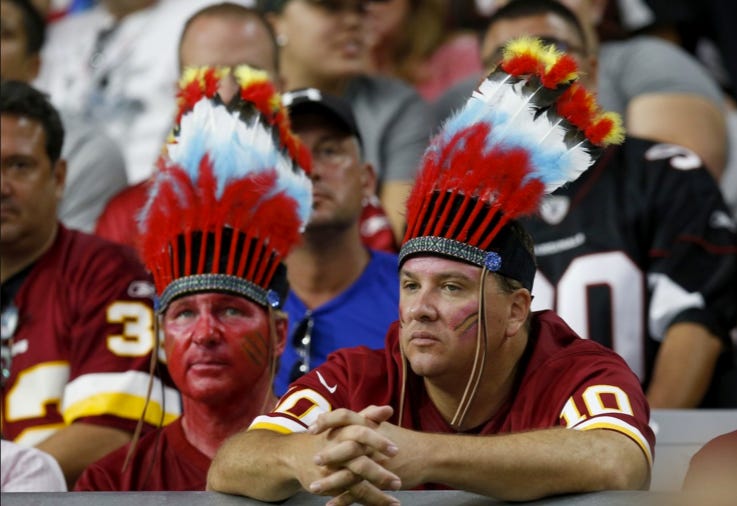