Newsday - Howie Rose, the Islanders’ lead television play-by-play announcer since 1995, will not return for the 2016-17 season. He cited a desire to reduce his workload, which includes his job on radio play-by-play man for the Mets. Rose informed MSG Networks officials of his decision on Wednesday; a search will begin for a replacement.

“It’s the textbook definition of mixed emotions. That’s exactly what it is,” Rose told Newsday. “I don’t know that I’ve ever been more conflicted about a decision I’ve had to make in my life. But I’m confident I made really the only one I could make at this point in time in my career and life. Strictly, it’s the idea that I could have an offseason like most people who do what I do for a living . . . At the end of the day it’s something that I do with, as I say, the epitome of mixed emotions. 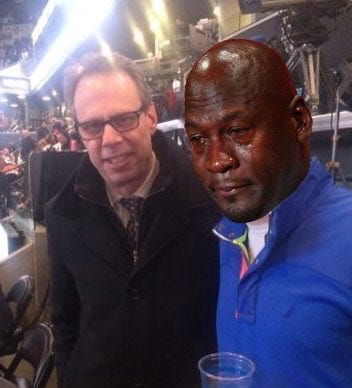 Well this was one way to end your Wednesday – After 21 years at the helm Howie Rose has called his final game as the Islanders Play by Play man. For starters, I would’ve put more money than I should have on Butch leaving before him, yet here we are. As one of the best voices in New York sports [and hockey] is dipping on the Isles just as the gettings good.

Obviously you can’t fault Howie, as for the last decade he’s worked both the Isles and the Mets year round, literally as #TeamNoDaysOff as you can get, which I’m sure takes a toll over time. I can’t blame the man for wanting an offseason after 10 years without and I’m sure one can only take so many years of hearing Butch Goring mispronounce names and preaching the chip and chase night in and night out before eventually snapping. Howie’s just staying ahead of the curve for everyone’s safety and I have to respect that.

For a fan who grew up in the 90’s, any good or bad moment I witnessed played to the tune of Howie’s voice. The Bates penalty shot, JT’s first career goal, Chris Simon going full-on Paul Bunyan.. everything. So him not being behind the mic come October is going to be a bitter, bitter pill to swallow. A new arena in a new location is one thing. I make it to no more than a dozen games a year, but having to deal with someone new for the other 70 is going to be a real process, because no matter who it is, it just won’t be Howie.

It’s certainly fitting that he was there to call their first playoff series win in decades, he deserved to be the one to make that call, but that won’t make seeing him go any easier. Truly one of the best, and the voice of my childhood. Gone but never forgotten.

If the feels haven’t already begun to creep in, here’s some of Howie’s best moments behind the mic.

Accidentally roasting the Isles on air

His rant on the Okposo Olympic snub