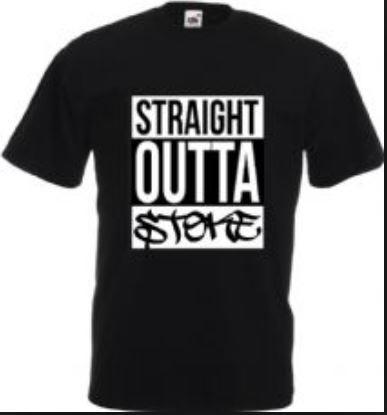 We thought the general public should know how ridiculous this Political Correctness shit is getting at the University of New Hampshire. Stoke Hall is the largest dorm on the UNH campus with over 700 students living it in. The Stoke Hall Council (made up of the students living in Stoke Hall) ordered Stoke Hall T-Shirts that read “Straight Outta Stoke”. Students have now learned that due to cultural appropriation of African American culture, the use of the word “Straight” that could be insulting to the LGBTQ+ community, being a privileged college student using the logo that represented a population that was from a tough area and struggled more than we ever have or will, and for promoting the encouragement of inappropriate lyrics, students are not allowed to have the shirts after they had been approved, ordered and delivered.

We were told that putting “Straight Outta Stoke” and wearing it on a shirt is worse than dressing up for Cinco de Mayo in terms of cultural appropriation. UNH Residential Life is more concerned that people would have them in their possession, than they are that they are now throwing away 200+ perfectly good shirts.

In the past there have been t-shirts that reference other UNH dorms Hitchcock Hall, Gibbs Hall, and Williamson Hall that read “We put the cock in Hitchcock” (referencing a previously all female dorm) and “We don’t always play with balls, but when we do we do at Gibbs Hall” with a photo of two hands reaching for balls, “Size matters when you’re in Willy”. These shirts were allowed, but, Stoke Hall isn’t allowed to have a shirt that represents pride from where you come from. Additionally, the Paul College First Year Programs and the Computer Science Department, both other departments at UNH, have used this exact logo (Paul FIRE “Straight Outta Durham, and UNH CS “Straight Outta Kingsbury”) representing a sense of pride from where they come from.

Straight Outta Compton, the song the Stoke shirt references is by far one of the most influential songs in hip-hop history and NWA is one of the most influential groups in hip-hop history. If the issue is putting their lyrics on our shirt, because of association with the profane word in their group name then let me ask you this? What if we had a shirt that said something like “Express Yourself Stoke”? Well, Express Yourself is a song by NWA! Which means Express Yourself is an association with NWA as well. What if we had a Public Enemy “Fight the Power Stoke” shirt? What if all of these were shirts…would they be allowed? My guess is yes because they are unfamiliar with those lyrics.

If the Res Life thinks they are better than the other departments on campus, they are sadly mistaken. They themselves have too much power and negative influence over UNH Students. This is one of the most ridiculous organizations I have ever been a part of. I just want my fucking shirt.

This was a whole lotta mumbo jumbo from this kid. Just a needlessly long email. I felt like I was in Jerry McGuire. You had me at hello. You had me at hello. All you had to say was that the your “Straight Outta Stoke” shirts were being denied by the administration because they said the word “straight” may offend transgenders and the lyrics from an NWA song may offend black people and I was sold.  I was all in. It’s Pussification of America at it’s finest. It’s a story so surreal it’s hard to believe. It’s UNH doing UNH things.  I mean for a state that has the motto “Live Free or Die” UNH consistently makes the most backward, mind boggling decisions of any administration in the country. Hell I’ll fucking buy the 200 shirts if you want em. You tell me how to get them in the hands of Stoke Hall students, I’ll print em up, put a “Fuck The UNH Residential Life” on the back with a Stool logo and call it a day. Help me help you.