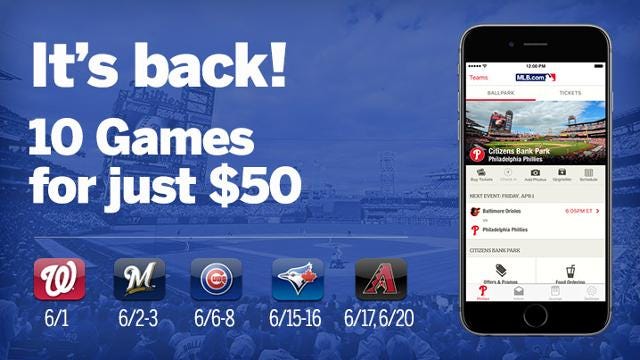 Phillies.com – The June Pass will give you access to every Monday through Friday Phillies regular season home game in the month of June for just $50. All tickets will be delivered digitally via your mobile device. Seating locations will vary game to game and will include the following sections: Terrace, Terrace Deck, Pavilion, Pavilion Deck, and Outfield. With the June Pass, you will enjoy the ultimate flexibility, the convenience of digital ticketing and the excitement of Phillies baseball.

FIFTY BUCKS!!! For less than two 30 packs of Bud Light you’re gonna need to watch this team you can get inside CBP for 10 games. It was 12 contests in April compared to 10 now, and I don’t care if it reeks of desperation to fill the seats, I absolutely love this play by the Phillies. LOVE IT!!! Granted, you still gotta pay $8 a pop for a beer and an artery at Bull’s BBQ (RIP Schmitter) but you’re still in the house for $5 a game. That’s worth it for the Cubs 3-game series alone. All that’s missing is the Wolf Pack, Padilla’s Flotia, and a few dozen fights and you’re basically back in the 700 Level at The Vet with those low prices. So good on the Phillies for dropping their shit down for the common folk and trying to light a spark in this city again. When the Phils were rolling for that decade, there was nothing better than going down to the Bank, tailgating your tits off under the sun, then going into the ballpark to enjoy the national past time.

And, hey, I would’ve been satisfied paying minimum wage to see a 2016 ballclub that would lose 100 games but still be somewhat fun, young, and exciting to watch. No shot in hell they keep up winning all these close games, but the Phillies are offically a Wildcard team almost 1/4 the way through the season. HIGH HOPES BITCHES!