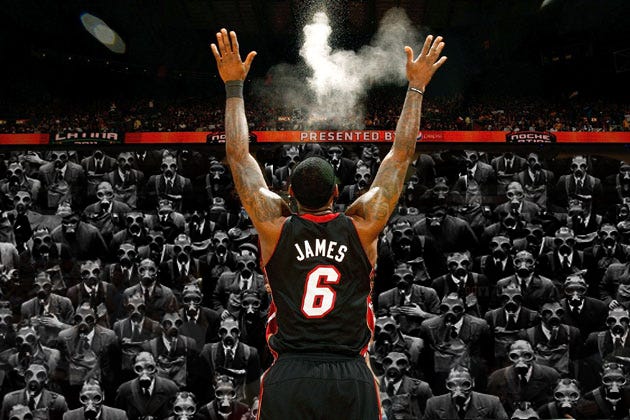 It looks inevitible that the Cleveland Cavaliers will steamroll their way over the Atlanta Hawks and put LeBron back into like his 6th consecutive Eastern Conference Finals. But as basketball fans gird their loins for a pants-wrecking Cleveland/Miami matchup, Heat superstar and future Hall of Famer Chris Bosh has just been informed that he has not been medically cleared to play in a big three reunion series with his three alleged “best friends.”

Bosh was declared out for the second half of last season after developing a mysterious and extremely rare blood clot in his lungs, and now it seems the ailment may of spread to his leg. Bosh is understandably upset at the medical staff, but the Miami doctors are just doing their job. I suspect the real culprit here is a certain superstar with a track record of poisoning locker rooms who just happens to have a habit of throwing known lung irritants into his teammates faces before every single game. A certain player who just happened to spend 3 years standing next to Bosh with a fistfull of bloodmoney in one hand and a handfull of rosin in the other. I sincerely hope for all the best in Bosh’s recovery but it’s important to call out the obvious cause of Bosh’s ailment- LeBron James hot dog pregame routine.

It only makes sense that a player who seems to make everyone else sick with his theatrics would eventually turn his sights on a teammate. I’m not saying he intentionally poisoned Bosh over their years together in Miami in order to make his path to the Finals easier when he inevitably left, but I am saying that it would be reckless to assume that he didnt. Was he malicious? Well he has ignored the warnings of scientists like Dr. Kathleen Fagan, Assistant Professor at Case Western Reserve University who cautioned James back in 2009 in a blog that he probably read:

“It’s not a good idea to throw powder up in the air and breathe it in,” said Fagan, who’s also an assistant professor at Case’s medical school. The particles can irritate the lungs, eyes and nose”

Irritate the lungs you say? Hard to tell if LeBron read this and took it as a warning, or a copy of his own personal anarchists cookbook. And as if thats not damning enough medical evdence, I found a self-described “unemployed science expert” in the comment section of a violin forum from 2005 discussing the potential side-effects of long term inhalation of rosin-dust:

“The analogy to asbestos is good…In the present case, contact dermatitis and acute worsening of asthma would be acute effects, and respiratory problems or cancer due to the accumulation of rosin dust particles in the lungs would be a chronic effect. (Pauline, 2005)”

Think about it. That’s 82 games a year times 3 years, plus about 25 playoff games a year (19 if you count the time James decided not to show up for the finals verse the Mavericks), which is almost 250 acute instances of poisoning from all the rosin that LeBron tossed directly into Chris Bosh’s breathing passages despite piles of medical literature telling him not to. Say what you want about Johnny Manziels tenure in Cleveland but at least he was a good enough teammate to make sure that all the dangerous white powder was being directed into his own face and not that of his collegaues.

It might be too late to stop LeBron from the damage he’s done to Bosh and Wade (who isn’t sick but he got supsicously worse after LeBron left), but maybe we can save J.R. Smith from being forced to ingest poisonous substances. Internet commenter Mid Major Mike has a suggestion for a much better and more realistic pre-game routine for LeBron.