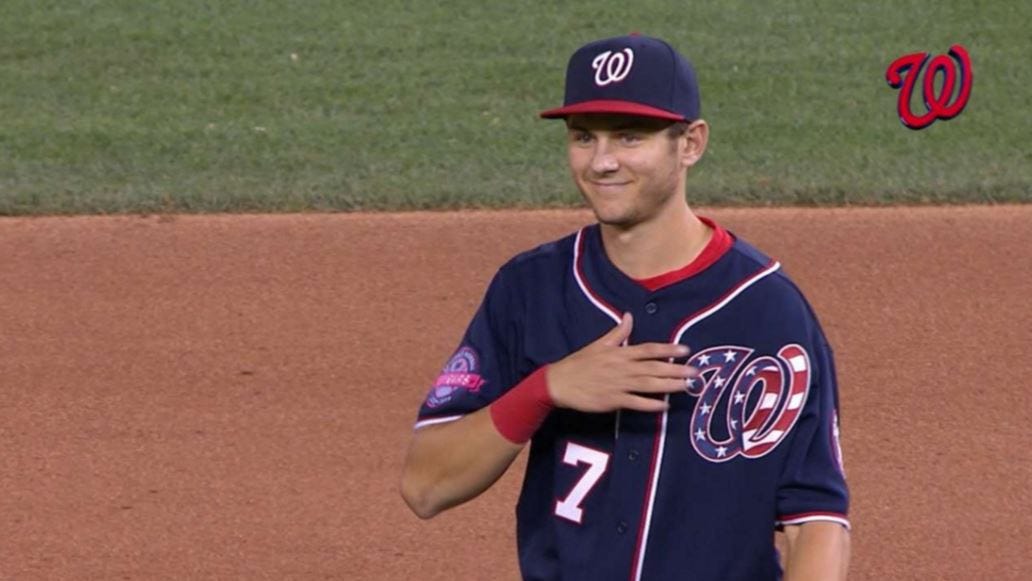 I just don’t understand this one bit. Turner is the Nationals top offensive prospect and made absolute mockeries of the minor leagues last season. He brings speed, defense, and batting all to the table and should be able to hit about a dozen homers over the course of a season too. Typically, I wouldn’t mind sending a young prospect back to the minors in order to get an extra year of control out of him but that just does not make sense in this Turner scenario. Turner played 27 games for the Nationals last year, and even though he came off the bench in most of them, he still accrued enough service time for it to be unrealistic to push back his free agency timetable.

Mike Rizzo and the Nationals called Turner up last season because they expected him to be the team’s starting SS in 2016. There is no other rational or legitimate explanation – you wouldn’t call a stud prospect up and give him 44 total plate appearances over the course of a couple months if you didn’t expect him to be a major part of your team’s offense the next year. So what changed? Not much at all. If anything, Turner should have had a clearer path to playing time with former SS mainstay Ian Desmond now manning the outfield for the Texas Rangers.

Over the offseason, the team signed guys like Stephen Drew to sure up their middle infield depth and I was absolutely fine with that because I knew that no rational team would ever consider Stephen Drew a more necessary piece than Trea Turner and yet here we fucking are. Turner is a better option than starting SS Danny Espinosa and his career .301 OBP and 50 TOTAL starts at SS in his 6 seasons in the majors but to put him behind Stephen Drew on the depth chart is absolute lunacy to me. I honestly cannot come up with a single logical explanation for starting Espinosa and keeping Drew at the expense of Turner. One thought that keeps popping up is that maybe the Nats (wrongly) decided that Espinosa is their starter and that they would prefer for Turner to play everyday in Syracuse than for him to play sporadically in Washington but then I think for a second and realize that this argument is complete bullshit. Rizzo had Turner playing sporadically in Washington just last August!

I’ve been confident that the Nationals had righted the ship from their Matt Williams collapses and I’ve been encouraged by their play this Spring Training but simple personnel mistakes like this one and refusing to field a roster of your 25 best players is just unacceptable for a team that has failed to EVER meet its lofty pre-season expectations.
Follow @SAlaskaBarstool