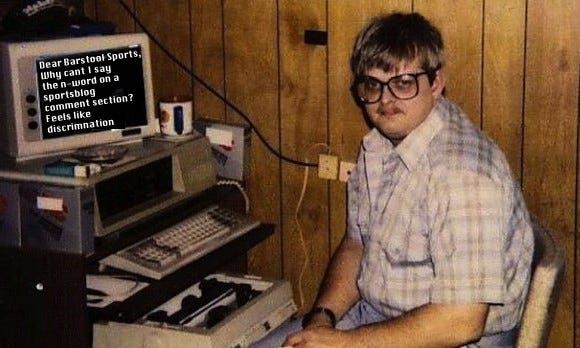 Welcome back to the weekly round-up Barstool Ombudsman column, where we take a look at the week that was and answer your questons about the site. As always, if you have any you’d like to see answered send them to BarstoolOmbudsman@Gmail.com. Let me start off though by addressing the recent activities of one David Portnoy.

After his adventures at SXSW, I’m pretty sure that Dave is on a TSA watchlist now. Need to talk to his dad about the legalities of smoking weed for 2 days straight on Vine, hanging out with guys who are roofie-ing themselves, and just basically having a bath salts induced schizophrenic break/midlife crisis for all the world to see. I havent seen a guy from Massachusetts lose his mind on video like that since the Zapruder film folks. No offense.

The more I think about it, the more I actually think this was a calculated move on his part, and he may have just outsmarted the entire world. Since Dave was too high to understand what was going on in all of those clips, he could legally claim that those videos were recorded without his knowledge. Its impossible to enter into a contract when your under the influence, so the fact that they were posted to Barstool without his consent means that Dave could technically pull a Hogan, and sue Chernin media group and wind up getting a huge settlement. You talk about playing the long con on someone well here it is in action folks- When Dave had Chernin buy Barstool, he put in whats known in mergers and aquisitions as a “poison pill” for them to swallow. In this case, the poison pill was Dave himself.  Next step he files a lawsuit, and is awarded $125 Million in civil damages and he has basically flipped Barstool to himself over the course of two months for like a %2000 profit. It could end up being the shrewdest business move of all time on his part. You guys watch Billions on Showtime? This play by El Pres is a business manuever that makes Bobby Axelrod look like he’s running a brothel out of a leper colony.

On to your questions:

We’ll start off with a humdinger in the comment section of a KFC column: 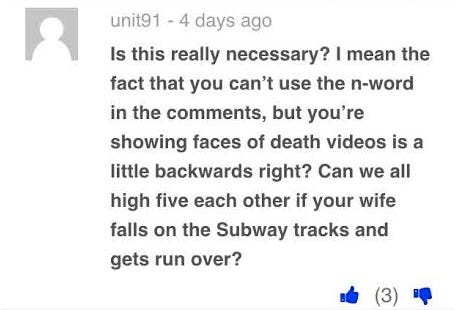 First of all thoughts and prayers to Barstool Commenter “Unit 91″ for not being allowed to use the N-Word in the comment section of a sports blog. I’m sorry for your loss.

My guess is that Unit 91, like so many of us, spends basically his whole day pissed off that he cant drop racial slurs online and wedges it in to any conversation like Bernie Sanders complaining about “wall street” when his wife asks him to comb his hair for the guests that are coming over.

Freedom of the press basically means that KFC can post whatever objectionable shit he wants as long as it is more probable then not that the people in the post wont sue him. In this case, the blog was a guy dodging a train on camera showing off for his friend and it ended poorly for him, and its pretty hard for a guy to find a lawyer to represent you when you cant even find your head. Smart calculated move by KFC on that one to cover his legal bases. So yes although I didnt watch the video, it is still legal to show it.

Likewise, your free to excercise your constitutional right to free speech to whatever extent you desire. Feel free to celebrate enthusiastically with friends when someone who worked for a sports blog that wouldn’t let you use the N-Word in the comment section’s wife dies tragically. That is your right.

First, as a former SB Nation employee and current Barstool Ombudsman, are you going to try in your position to bring previous conflicts to a rest, or reinvegorate old beefs? Any plans on collaborations specifically focused on long-forms humanizing convicted felons?
Second, you haven’t been asking Bernie and Hillary the hard questions on Baby Hitler throughout this campaign. Does this show your #SECbias towards not asking Democrats the important questions as Barstool Chief Political Correspondent?
Go Jets, Fuck Brady
-Karl

I dont want to reveal too much about my plans but I have considered embedding myself in prison for a month basiaclly like Drew Barrymore going back to high school in “Never Been Shanked” to write a unauthorized biography of Aaron Hernandez. If anyone knows any cool crimes to commit that would get me sent there shoot me a email.
Basiaclly my plan for how I deal with the SBN/ Barstool feud is to act like the guy at a high school basketball game who used to date a chick from the other school. So if someone throws a cup of soda and hits Big Cat, I’ll try to hold him back in the parking lot, but I might not be able to stop Dave from throwing a sneaky haymaker to protect him. Barstool is a pirate ship, so therfore I’ll try to enforce the rules of parlay if someone asks for it- but I’m not under the illusion that the Hatfields and the McCoys are all going to get along all the time just because two of their kids got hitched.
As for the politics part, Ive got some plans brewing right now, especially for the conventions. The problem with the Democrat side of things has been that they’re both pretty much sticking to their own gameplans and saying the same exact stuff over and over again. The GOP has been like a soap opera that keeps digging itself deeper and deeper while the Democratic side has been like a crappy museum diarama with a “push-to-listen” button.
I’ve noticed that when Hillary talks about war at least she has the good ettiquette to do it in a way that makes us not really understand exactly what war is. She says stuff like “I supported the strategic limited military intervention in Iraq” which technically translates to “I voted to kill hundreds of thousands of people with explosions” but in a nice way. Tough for me to troll someone whose that polite. Trump on the other hand can come across as too honest when he says that he lied about not supporting the Iraq war. Could hurt him in the general election.

Yeah you pretty much nailed it. A good rule of thumb is that as long as you dont know them personally then its fine to attack them personally. Thats why the PSA segment is called “The more You Know” because as your knowledge of something increases, your desire to threaten it with violence or call its parents “fags” decreases. Theres a real danger that comes with getting to know people that you hate online in real life, and thats the fact that alot of times you start to not hate them as much, or even worse, you kind of like them a little bit. In a way, real life is a breeding ground for Stockholm Syndrome between online enemies, and I have to discourage it as much as possble.

Will the Barstool App ever get fixed?
-Jessie C

Here’s the thing about the Barstool App. I literally have no idea why the Barstool App exists.
My understanding is that the app is just Barstool Sports dot com except with fewer features and more glitches. I feel like back in 2011 Dave got a iPhone and realized that the whole world was talking about apps, and he thought to himself that as a internet mogul, he needed one too. So he deisgned a app that would allow readers to access Barstool Sports with only a smartphone and a internet connection, not realizing that he already owned a website called Barstool Sports that could be accessed by anyone with a smartphone and a internet connection.  Its a classic case of:
1. Build app
2. ???
3. ???
4. Profit
Plus if Dave knew anything at all about apps at the time he would of dropped a vowel from its name to make it sound way cooler. Brstool Sports, or Barstool Sprts. If Hitler had been named “Hitlr” you have to think instead of being villainized, Germany would of been applauded for disrupting the oppressive economy imposed after the Treaty of Versailles. The more vowels you get rid of, the better your app is. App 101.

I will say that the app has been a tremendous success amongst Barstool Readers who are too dumb to find the safari button on their iphones, which no offense, is not a insignificant demographic. But in terms of will it ever get fixed? Yeah you might see it improve or you might just see like a mobile optimization of the homepage but if you have 5 HTMLs do you really have 1? Tough to say.

Thanks again for your emails, and as always if you have any comments concerns or questons about the people, the website, the stuff behind the scenes, etc. at Barstool Sports, send a note to BarstoolOmbudsman@Gmail.com and we will address it in Fridays column.