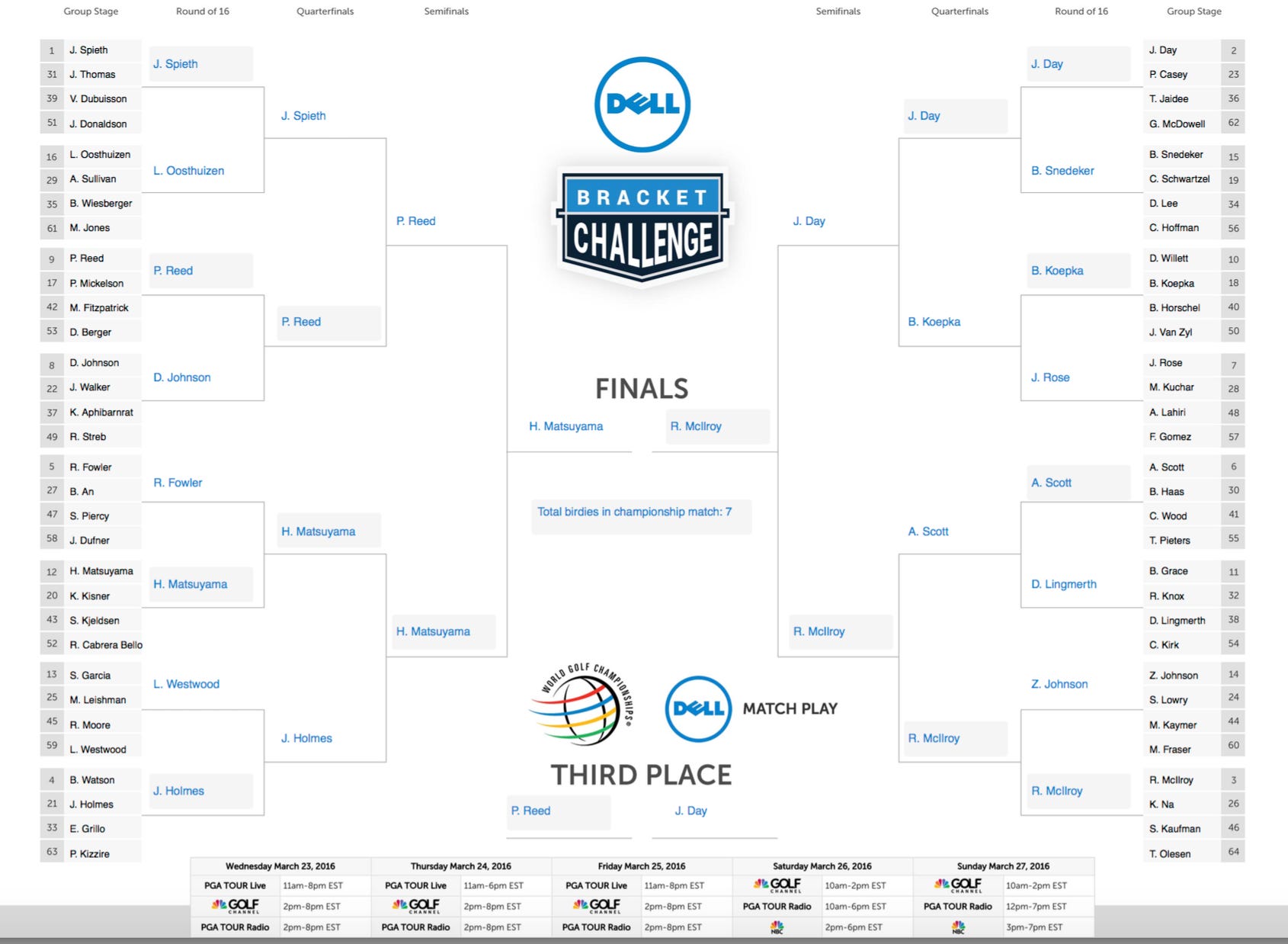 March Madness baby!  Golf style!  I bet your college basketball bracket is already busted. I know mine is (thanks, Michigan State) but you’re in luck. There’s more madness to be had and it’s of the golf variety.  This Wednesday through Sunday is the WGC-Dell Match Play taking place in Austin, Texas. Basically where all the best golfers in the world square off in match play. It’s fucking awesome if you’re a golf fan. It’s even great for casual or non-golf fans because instead of a stroke play tournament it’s a lot of head-to-head match ups which is always great. And you’re able to fill out a bracket which is never not fun. Not to mention the field is STACKED because, well, it’s a WGC event. I’ve got Rory winning it all again because he’s Rory. You can fill out your own bracket here at the WGC website.

Patrick Reed. The American golfer that everyone either loves with all of their heart or hates with the burning passion of a thousand suns. With that said, I’m honestly still on the fence about how I feel about Reed.  Yeah he’s kind of an asshole but he’s American so he’s our asshole. And not in the way that Bubba Watson is an asshole. Bubba is an actual asshole. Reed seems like an on-the-course put-my-nuts-on-the-table type of asshole. The good kind. Anyway, this is the kind of event that is perfect for Patrick Reed. The guy loves competing so I feel like head-to-head match ups are right in his wheelhouse. I’ve got him going all the way to the Final Four going up against this next guy.

Hideki Matsuyama. Here’s a young gun on the tour (24 years old) that doesn’t get talked about as much as he should IMO. Two wins on the PGA Tour. Six wins on the Japan Golf Tour. A couple top-10 finishes in majors over the last couple of seasons. I just like the guy and he also happens to be loaded with talent. His swing is different with the little delay at the top. He most recently won the Waste Management Phoenix Open in a showdown with Rickie Fowler (who he’ll potentially square off against in the Sweet Sixteen). I like him going all the way to finals.

Brooks Koepka. Another young guy on tour (25 years old). Pure athlete. One of two guys on the PGA Tour who could play just about any sport they wanted (the other being Dustin Johnson). He also has a new Nike sponsorship this season so he just looks like a winner. My theory is that golfers who wear Nike clothing are 45% more likely to win because they kinda sorta look like Tiger Woods. I don’t even know if that percentage makes any sense but it’s how I feel in my brain and in my heart. Koepka had a top-10 finish at The Open Championship in 2015 and tied for 5th place at the 2015 PGA Championship. I just like young guys in match play events. That’s the running theme here.

Justin Thomas. Why not? Well other than his good buddy Jordan Spieth is in his opening group. That could be a problem. Honestly, I just want Justin Thomas to get out of the opening group and make some noise (shout out Pardon My Take) in this event to hopefully get the Jordan Spieth’s Good Buddy tag off his back for awhile. He’s too good of a golfer to have that be his legacy forever.

You obviously also can’t go wrong with past champions such as Rory (my pick), Jason Day or Matt Kuchar.

And as always, #AnybodyButBubba. If you pick Bubba to win this event we are no longer friends. That’s the way it’s gotta be.