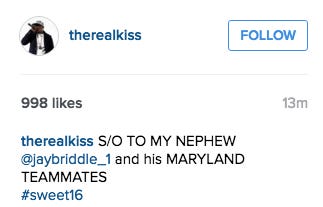 Why is Maryland as hard as it gets? This changes everythingggggg. Here I was stressing over beating South Dakota State and then stressing over beating Hawaii. Shit, they covered the spread vs Hawaii even though they shot 1/18 from 3. Little did I know this whole time Maryland has had an ace up their sleeve, and that ace is Jadakiss. Teams with connections to Jadakiss don’t lose first and second round matchups.

Kansas is a different animal though, so Jadakiss can only help so much. Maryland does have a couple things going for them though. For starters, they can’t possibly shoot any worse than they did last night. Winning by 13 while shooting 1/18 from 3 is some sort of wacky. Melo got to the line and hit his free throws, and Diamond Stone decided to actually try in the second half. If they both come out on fire vs Kansas, as well as Layman from 3, Maryland can control the tempo of the game and win. Secondly, Maryland isn’t a good rebounding team at all, but the god news is either is Kansas. Rebounding is the Jayhawks bugaboo, which helps Maryland a lot because they are garbage on the boards. And third, Jake Layman will be defending Perry Ellis. Layman has proven to be a lock-down defender, and he will be suffocating Ellis from the tip. If Maryland can stifle Ellis’ production and hit their shots on the other end, a date with the Elite 8 will be in the books.

Tip is Thursday night at 9:40, so plan your bloody mary consumption accordingly. Hopefully we get another one of these.