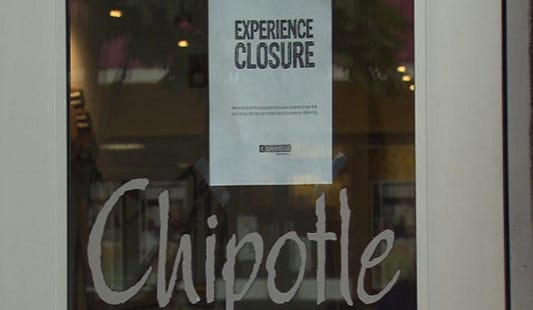 USA Today - Chipotle Mexican Grill (CMG)’s co-CEOs just saw their pay get sliced in half – but they still made $14 million each in 2015. The burrito chain late Friday released its proxy statement showing co-CEOs Steve Ells and Monty Moran both took 50% pay cuts in 2015 – pushing their pay down to $13.8 million and $13.6 million, respectively. The big pay cuts coincide with precipitous drops in the company’s stock price as well as earnings and revenue growth last year due to concerns about the safety of the chain’s food. Chipotle’s stock – which had been red hot coming into 2015 – lost nearly a third of its value during the year. Chipotle’s revenue rose 9.6% in 2015 and net income gained 6.8%, a massive slowdown of growth from previous years. Revenue and net income grew 28% and 36%, respectively, in 2014. Demand for Chipotle food was hit several times last year following a rash of food safety mishaps, including a number of Salmonella and E. coli outbreaks. Shares of Chipotle are up $12.25, or 2.4%, to $520.15 Monday.

You know what’s weird? Barely anyone got sick at all from eating Chipotle. Real talk: if you haven’t eaten Chipotle and just figured that you contracted some sort of disease that makes you shit your guts out after, you haven’t eaten Chipotle at all. Only something like 60 people in all the Chipotles in the world got E-Coli. That’s crumbs. But you know who suffered the most? The CEOs. Can you imagine getting a 50% pay cut? That’s preposterous. Yeah I get it, a few people got a disease as a direct result of eating their food. But it’s not their fault some migrant worker was letting shit run into the chicken coop. Not the CEO’s fault the cow was eating free range grass tainted with bacteria. The CEOs are in Bali doing laps in infinity pools, not checking the meat for disease. A few people got sick because they ate Chipots at the wrong place at the wrong time and the entire world ends: 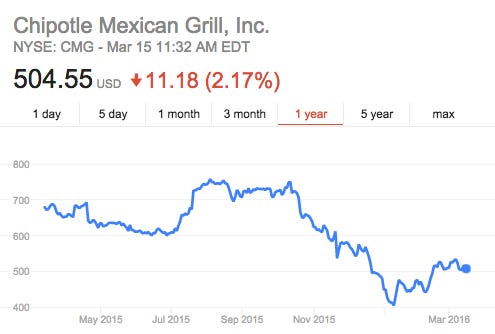 I mean that just ain’t right.

Going from making 28 million a year to 14 million a year because something completely out of your control sounds like absolute torture. If they injected the chicken with E Coli, that’s one thing. But taking a 50% cut on the ol’ W-2 because of some fucking farmers and their stupid cows, that’s grade A bullshit.