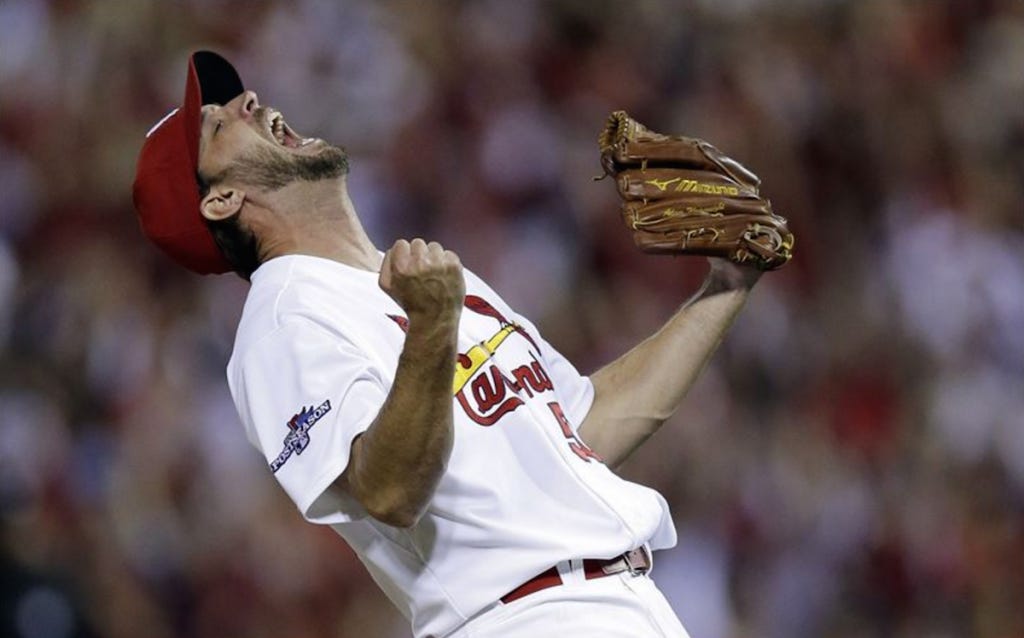 Cardinals ace Adam Wainwright joined the group of pitchers — I mean, players — who think that some hitters need to respect the game.

“If a pitcher struck one of these great hitters out and then did a cartwheel off the mound, then the hitter’s going to throw everything, they’re going to bench-clear,” Wainwright said. “But if a hitter hits a homer and throws a bat 26 feet up in the air, they think it’s OK? I don’t know if that’s OK. I think you can have fun, but be respectful at the same time.”

“I just know there are always going to be people who stretch the boundaries of the unsaid rules,” Wainwright said. “There always have been. You can look back at Reggie Jackson in the ’70s. He was doing stuff like that and pimping balls, and there are many people that did it over the years. The different personalities are great — they help our game — but you can do it respectfully.”

Totally agree with Wainwright here. I really only enjoy watching the pitchers who keep their emotions in check when they get a big strikeout during the playoffs.

The craziest part about all of the people speaking out against Jose Bautista’s bat-flip is that they’re acting like that’s his signature move that he does every time he hits a home run. It was ONE time, and it was the second most important home run that was ever hit in the history of the franchise, which has been around since 1977. And I’m not saying that if hitters have to keep their emotions in check then pitchers should, too, no. I want all of it. I want pitchers showing emotion on the mound when they get a big strike out. That fires me up. And a bat-flip after a monster home run is the icing on the cake. There’s nothing more satisfying for me, as a baseball fan, than seeing somebody crush a 450-foot home run and then pimping it afterwards. I love it. I need it. I live for it.

There’s gotta be a psychological explanation as to why pitchers are such whiny little bitches over celebrations, even though they all celebrate themselves. They can’t possibly think that pitchers are the only baseball players who are allowed to celebrate, can they? Maybe it’s because when a pitcher strikes out a batter, the batter gets to hang their head and walk back to the dugout and hide. When a hitter takes you deep, you have to stand there on the mound in front of everybody with your dick in your hand, while the hitter gets to flip his bat, high five the first base coach, there’s fireworks going off, the ballpark DJ is bumping Zombie Nation, the third base coach gets a fist bump, the hitter finally reaches the plate, does a little dance, and then makes out with your girlfriend in the front row before jumping into a mosh pit of his teammates in the dugout. Nothing more emasculating.

I guess I can see why giving up a home run as a pitcher is more of a blow to your ego than striking out as a hitter. But I mean, really. These pitchers need to stop complaining. I’ve said this in previous blogs about this particular topic, and I’ll say it again. Guys, this ain’t about you. Nobody cares if your little feelings get hurt. Nobody cares about the “unwritten rules” of the game anymore that were written before the invention of the television. It’s all about the fans. You know, the people who watch all the games, buy all the tickets, beers and t-shirts, and allow a league to exist where the league minimum salary is over $100,000 more than what the President of the United States’ salary is. Yeah, them. What they think matters more than what you think, and they think that bat flips (at the appropriate time) are highly entertaining. So quit bitching. And most importantly, stop giving up home runs if you have such a huge problem with what the hitters are doing afterwards.