I hate Dan Snyder. I hope he falls off a mountain in the worst way. However, the one saving grace about him is he wants to do 1-up Jerry Jones, who I hate even more. And the enemy of my enemy is my friend. So while Dan Snyder is the worst, anything he does that cuckholds Jerry Jones and the Cowboys I’m all aboard with. Which is why it will be fascinating to see what sort of new stadium Dan Snyder builds. And while you probably won’t be able to surf and sunbathe outside of it, while people scale it like Meru behind you, I like where his head’s at. I love that the official Redskins Twitter account is sharing such pictures. Sending shivers down Jerry Jones spine. I mean look at this thing: 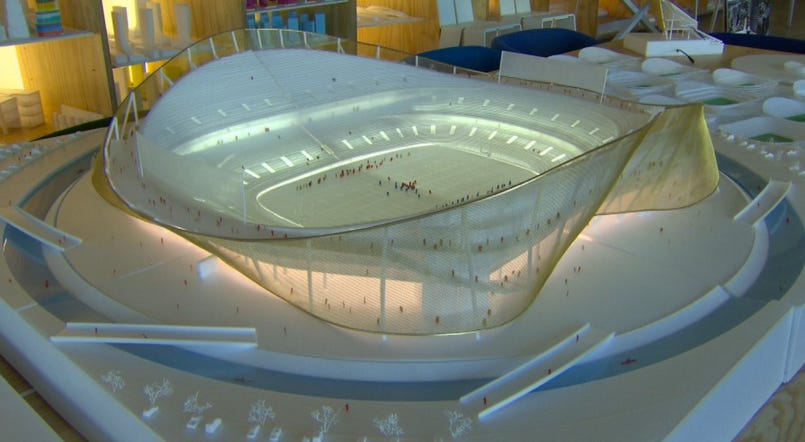 Taking state of the art to a whole new level. I do believe the new stadium will have a roof so it can host concerts and the Super Bowl and Wrestlemania and the like, but it will be better than Jerry World in every way imaginable.

So while the above models are not what the final stadium will look like, but what we’ve learned is 1) the wheels are in motion to get out of that dump FedEx Field, and 2) Dan Snyder will spare no expense to make the new Redskins Stadium as out of this world as possible.