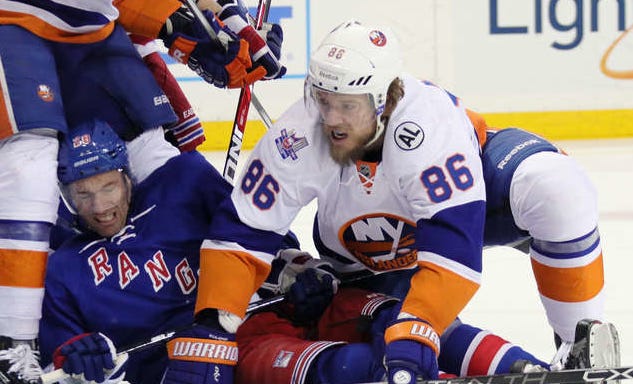 I’ve stated this multiple times, and I know pretty much any fan of NYC’s two hockey teams would agree, but I NEED an Islanders/Rangers 7-game series come spring. Absolutely need it. Like Pres needs air, or whatever.

There’s no denying which of the two currently owns the city, as what the Rangers have done on the shoulders of Henrik Lundqvist is nothing to poke holes through. But the lack of some specific hardware, mixed with baby brother finally being able to punch back, now is the time for these games to actually mean something.

This Isles club is notorious for letting points slip to bad teams yet are always able to get up for the bigger games, as some of their best hockey this season has came against the league’s top teams. Go figure. But when you throw these two onto a sheet of ice, magic happens. Be it shootout wins or 7 goal periods, the Isles and Rangers just make for entertaining, unadulterated hockey, and New York deserves 7 games.

There may not be enough cigarettes this side of the Hudson to get us all through the series, as Dan Girardi giveaways and Brian Strait just flat out trying to hockey would probably send us to our death beds before Game 4, but those last few days on earth would be so worth it.

The rising JT vs the aging Nash. The league’s top two-way defensemen in Leddy vs McDonagh. The two best goalies in the world in Greiss vs Hank. The blogs would write themselves people.

I’ll gladly take the 6 points off the Rags’ plate in the regular season, but with it being over 20 years since the two have met in the postseason, what better way to make it out of the first round than to do so while helping close the Rangers window. Sign me up.

PS – What’s the term? Straight from the horse’s mouth? That can’t be it.