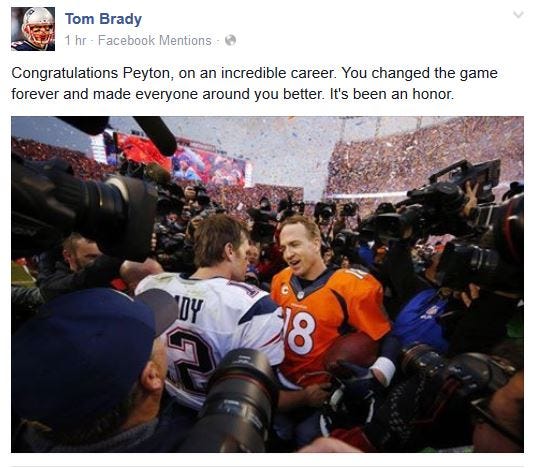 Ok so Peyton Manning “retired” today. More like he literally can’t throw a football more than 3 yards anymore and nobody wanted him, but that’s semantics. Even though I’ve always hated his ass you can’t deny his place in history. So without further ado here is my top 10 QB’s of all time. And just so people understand how I did this I tried to imagine if all of these guys were coming out of college this year.  Who would I draft if I had the #1 pick knowing what I know about them now.  I fully admit I’m biased against older guys because I didn’t see them play as much.

I actually think Ben may be one of the most underrated QB’s of all time. He’s one of the few guys who can almost win games by himself.  I have him at #9 on this list but if he didn’t sexually assault chicks, crash motorcycles and could stay healthy he’d probably be higher.  And yes I think Big Ben gets himself in trouble 100 out of 100 times no matter who he plays for.  Like it’s no fluke. That’s just part of the Big Ben package.

First of all I give him zero credit for the Broncos winning the superbowl this year. They won despite him. He will still go down in my book as one of the worst big game QB’s off all time. But he was a stat machine and almost an automatic 12-14 wins for a decade straight.  If you draft Manning you know you’re headed to the playoffs for at least 10 years straight.

I sometimes get confused on Montana. I feel like he always had the best offense to work with. He arguably had the best WR of all time, a great running game, a great TE, great offensive line. He had it all. And when he got traded Steve Young stepped right in and won another superbowl. Yeah he has 4 rings, but so does Bradshaw and nobody talks about Bradshaw like they do Montana. Is he that much better than Aikman? I guess sometimes the Montana love confuses me. He had zero mobility and would throw 7 yard slants to the best WR’s in the game and let them run to the house.  I know people will disagree with me having him at #5, but if I was starting a team the guys above him I’d pick before Montana.

Lightening release. Pure talent. I feel like he threw guys open before people even knew what that meant. Was it his fault he never won the Superbowl? I don’t know how you can say he didn’t play a part in that.  But his talent is undeniable.  I don’t know how you could ever pass that up in a draft.

3. Aaron Rodgers
I think the Packers would be one of the worst teams in the league if it wasn’t for Rodgers. He is literally the entire team. When Rodgers gets going he’s almost impossible to stop. I’ve never seen anybody throw better on the run than him.

The guy had it all. Rocket arm and could outrun safeties and cornerbacks. You can argue that guys like Brady, Montana, Aikman, Bradshaw need a supporting cast. Elway was gonna be great no matter what because he could do it all.

Am I biased? Of course I am. But I’m also not lying. In my heart of hearts I think he’s the greatest QB who has ever lived.  I’ve seen him play every single game of his career all the way back to college. There is no guy I’d ever want other than Brady leading my team. Even games like the one we lost to Denver showed how great he is. He made throw after throw in the 2nd half in the face of ridiculous pressure. He always seems to come up big in the biggest moments. The guy is a winner plain and simple.

Honorable Mention – Brett Favre and Steve Young. I didn’t put Favre on this list because every time he threw a football I expected it to be intercepted. Steve Young just didn’t have enough great years to make it.