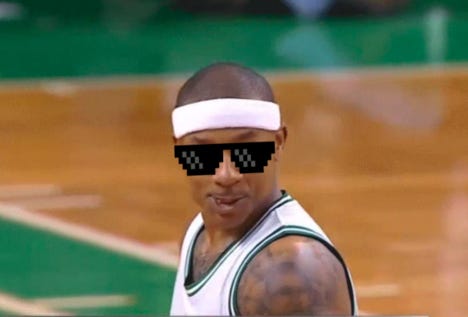 It had been 15 days since the Celtics took the court at the TD Garden, and if you ask me, it was much needed. After struggling out of the gate at home (9-10) the Celts have now won nine in a row and have clawed their way back to respectability. The way the Celtics played last night against MIL was exactly what the doctor ordered. Clearly frustrated with how their three game road trip ended in MN, and hearing all about those “tough” and “intense” practices in Waltham, it was good to see the Celtics respond with a wire to wire win.

Now let’s not go crazy, it was just MIL and basically this makes up for the game that Avery blew for them a few weeks ago. Remember when everyone said I was crazy to think the Celts would be the better team this year? Good times. Anyways, it was important that the Celtics kick off this five game homestand off on the right foot, especially with tough games against MIA/UTA/POR on the horizon.

We are now 70% through the season, and at a 34-25 (.576) the Celtics remain on a 47 win pace. I’m not sure how much more people need to see to finally take them seriously, because if you can imagine, people still have their doubts. Sometimes you keep waiting for that other shoe to drop, and it never does. It’s crazy to think how your team can play when they aren’t on the second night of a back to back. I’m sure this win will be thrown into the “should have won anyway” category, and if they had lost, it would have shown who they really are. I’ve accepted this false sense of reality.

What I loved most about this Celtics performance was how different it was from the last time they played. Brad clearly watched the film and made some adjustments which paid off. What were they? Well, read on.

– Much like the Feb 9th game, the Celtics did a great job of starting fast. That’s not really a surprise. What did come as a surprise was something that we saw in the Celtics very first made bucket. This is the type of play that I love to see the Celtics run, and since it’s early in the first quarter, this usually means it’s going to be an  Avery pullup.

But watch what happens. We see the normal motion offense of Avery coming high off a Sully screen, but then came the twist. Instead of pulling up, Avery kept the ball moving to Jae Crowder who yet again utilized his running start upon receiving the pass. It’s an unguardable play. This I feel like was the first look into what Brad’s gameplan was. Last time these two teams played the Celtics shot 29 threes, and didn’t make too many of them. Here, we see early that the Celtics goal was to be aggressive and challenge the frontline of MIL. Loved this play.

– I suppose I couldn’t talk about the first quarter, and really this whole game without addressing Jae Crowder. Just a guy huh? Someone the Celtics fans are irrationally overrating? How about showing some fucking respect for what this guy is doing. First, he takes the opposing team’s best player night in night out. Second, for the month of February he’s averaging 15/6/2/1.5 with 50% shooting from the field and 36% from three. Over his last six games he’s been even better. He makes big shots, he doesn’t make excuses, and not only do we not win last night’s game without him, I’m confident that’s not the only time that sentence makes sense.

The most common argument I’ve heard in regards to Crowder is that can he even score? I understand people are confused because he was basically just a player thrown into the Rondo deal, but his development is real. Take this play on the baseline against Giannis, who by all account is a plus defender. Jae doesn’t panic, takes his time, and unleashes a move I don’t think we see from him early in the year. God I love his man.

Jae Crowder came to play tonight. Check out this strong finish from the C’s forward: pic.twitter.com/cfjqhAsvtW

- I was also really impressed with the effort from Amir Johnson. It’s no secret, I have a basketball soft spot for big men that run the floor. I can’t help it, it just gets me so excited. Amir putting in his best effort since around mid January is something I attribute 100% to effort. Maybe once in a blue moon will the Celtics actually run a play for Johnson, so for him to make an impact, it needs to come from high energy plays. We got our first taste early, and it set the tone for the night. Also let’s not ignore his defensive effort. His 102 defensive rating was third best on the team last night, and considering the post is where the Celtics really struggled on Feb 9th, I didn’t hate this.

– The second adjustment in my eyes that Brad made for this game, was his emphasis on the dribble drive. Whether it was with Isaiah, or Turner, the Celtics made a conscious effort to get into the paint with their guards. Once that happened, obviously the Bucks were forced to rotate and boom, easy buckets. We saw it a couple times, each as beautiful as the next

Just before the half, Evan Turner found Amir Johnson who pirouetted his way to the hoop for this sweet bucket: pic.twitter.com/84fJOvVapk — Boston Celtics (@celtics) February 26, 2016

Isaiah and Amir are at it again! The two just combined for this highlight reel play: pic.twitter.com/LG49wNJYRo

Isaiah’s ability to get into the paint sort of reminds me of how Kyrie Irving plays. They are both really really good at splitting that high screen and getting into that sweet spot. Remember this as we start to get into the playoffs, because if teams have to respect Isaiah’s floater, and he can get into the paint, things are going to be fantastic.

When it happened, pretty sure I came and had a heart attack all at the same time. Given the circumstances of when this play was attempted makes it even more impressive. What massive, massive testicles. And don’t discredit Jae from knocking down that shot. He NEEDS to make the shot after a play like that, and he fucking nailed it.

Now, Twitter basically erupted calling this one of the best passes people have ever seen. Here is how I imagine a certain someone reacting when they saw that on their timeline

Oh how soon people forget. Rajon Rondo was doing this EXACT play 5 years ago. I dunno if it’s because he’s an asshole that people forgot, or that he makes so many amazing passes that they all sort of lump together, but as nice as Isaiah’s pass was, let’s not forget the original

– The real reason we are feeling great today is because Isaiah Thomas took this game over. He abused the Bucks early with his drive, it didn’t matter who they put on him

IT with the slick handles! Like Tommy said… You can’t stop Isaiah: pic.twitter.com/fqPjbGExtG

But where I think the game was really won was when he came back into the game with 5:31 left. The lead down to 96-91 (after being as high as 18) Isaiah made the three biggest plays of the game. First, he did this

Then the very next possession did this

Which ultimately led to MIL having to play him for his drive, which led to this

Isaiah Da Gawd showed why you CAN go to him down the stretch when you need a bucket to win a game. I don’t want to hear it again. He may not come through every time (who does?), but to anyone who thinks the Celts are missing that “go-to” piece with he game on the line, take a lap.

- For the third straight game the Celts actually shot the ball pretty well ending the night at 48.8%. They won the rebounding battle (42-35) and while they struggled with points in the paint, they did a great job of limiting the Bucks to just 8 second chance points. This commitment to the glass is another area of focus that I think Brad put emphasis on based on their last game.

– Credit the whole starting unit, because they carried the Celtics last night. We talked about Jae, Amir, and Isaiah, but let’s not forget the efforts of both Bradley and Sully. Bradley continued to shoot the ball at an efficient rate, and Sully with his second double double and third double digit rebounding game since the All Star break. The starting fives’ 94 points accounted for 83% of their total, and it was great to see the starters pick up the slack on a night when the bench struggled.

– Whatever the hell that was on the Celtics very first possession. What a lazy lazy pass, and I’ll admit, it made me nervous that the Celts heads weren’t in it. Can’t turn it over like that.

– It’s getting real annoying how disrespected Isaiah Thomas continues to be. The guy cannot buy a foul and some are pretty glaring. Last night especially. Usually, at home, the more aggressive team gets rewarded. Well things could not have been more opposite for Thomas. I’m not sure if it’s his height or size that causes the refs to miss it, but for whatever reason he can get murdered in his own building and someone like Giannis is getting the benefit of the doubt. It’s gross.

– Crowder’s foul trouble. Only because it robbed us of what was an amazing performance. Jae only playing 23 minutes last night is a shame, was on pace for another career night, right after he just had a career night.

– The Celtics continue to give up way too many points. Another game over 100, keeping their consecutive game streak alive. Are they really going to go a whole month in which they can’t give up less than 100? The Celts defense has been league worst as of late, something that needs to turn around quickly.

– Carmelo Anthony almost being a Celtic. Laugh out loud funny. I thought we were done with these type of stories. Give me a break.

So just like that, life as the Eastern Conference 3 seed resumes. With MIA on deck, things are starting to get interesting. I think this is a great measuring stick for the Celts. Win this one convincingly and start to give yourself some separation, not to mention the importance of head to head records down the stretch.

It had been a long time since the Celtics felt the warmth off TD Garden, and by the looks of things, warmer temperatures are on the horizon.