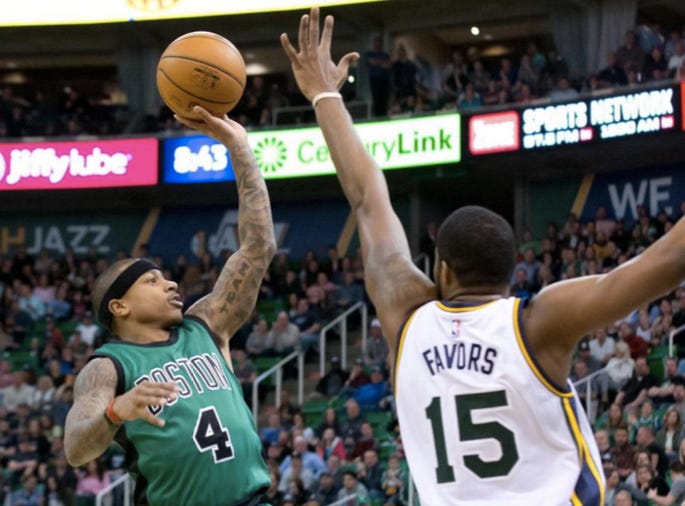 Waiting a week to see the hottest team in the Eastern Conference was awful. In my opinion the AS break could have have come at a worse time, with the Celtics playing their best basketball of the season. I feared that with the stoppage in play, once things started up again, the Celts would lose a little bit of their edge. Well, case and point. That game last night?

But let’s get a few things straight before we dive in. I saw a lot on Twitter after this loss how this is a “bad” loss and truly shows how the Celtics are going nowhere. After calming down from my hysterical laughter here is my takeaway. It’s a “bad loss” because the Celtics played bad, not because the Jazz are bad. In fact, the Jazz are 8-2 in their last 10, and are actually pretty good once healthy (which they now are, haven’t been all year). This wasn’t a case of the Celts playing down to a shitty team. The Jazz won this game more than the Celts lost. So sorry, I reject this theory. It’s OK that the Celtics lose a game to a team battling for a Western Conference playoff spot in their own building. It’s just not OK how the Celtics played,

Even though it doesn’t matter, I’m running on no sleep and still fired up about this. Why is it that whenever the Celtics lose ANY game the narrative is “well, this is why they’ll be a first round exit! Can’t win with this group!” It happened after losing to Orlando (but the not a peep when ATL lost to them back to back) it happened last night with the Celts loss, but not a peep about the ATL/DAL/TOR losses. Last night was a weird night in the NBA, and they tend to be coming out of the All Star break, so please everyone chill the fuck out.

And another thing! I don’t want to see another comment about a “weak” Eastern Conference. This isn’t last season where you can get into the playoffs being 5 games under .500. The “you’re closer to 8th than 1st” bullshit is just that. Bullshit. I get that people need to stick to their guns that the Celts would be bad, but seriously save it. How come this doesn’t impact TOR? And, if this conference IS so weak, all of the sudden the Celtics won’t be able to win an opening round against one of these “weak” teams? God it’s infuriating. Rant over.

So last night, yeah it sucked, but look at the bigger picture, it’s been a LONG time since the Celts have been handled like that

so let’s not get too carried away. Tough way to start the trip, so let’s dive in.

– There wasn’t much, but the Celtics did do a pretty good job early staying active and causing turnovers. Eight in the first quarter made things frustrating that they couldn’t pull away, but the Celtics actually did a pretty good job of holding on the the ball as well. Just seven turnovers for the game is a nice number I think we can all get behind.

– I thought Crowder played pretty well, and I was happy to see the rest seemed to help. He didn’t appear to be favoring his leg that was bothering him before the break, and he actually shot the ball at a good clip. Crowder has been living in that 17/4 range the last few weeks, and while no he probably won’t be the 20pt scorer Felger thinks he needs to be, don’t get it twisted. Have this sort of production from Crowder is found money.

– With Utah having a really really good inside presence, I liked how the Celtics chose to attack them, and it worked early and unfortunately is a tactic they sort of moved away from as things started to slip away. Look at this play midway through the second quarter from Marcus Smart. He does a great job of getting past his man and making both Hayward and Gobert commit, which then left Avery open in the left corner where he shoots 38% on the year

Smart kicks it, AB pumps it, then nails the wide-open trey from the corner. pic.twitter.com/ag4B7Byd13 — Boston Celtics (@celtics) February 20, 2016

This play isn’t rocket science, but I liked that Smart didn’t try to force a contested layup (more on this later) and Avery took his time and didn’t rush his look.

Brad Stevens says he told the Celtics in the postgame locker room, “You’re a pro. There shouldn’t be any rust.”

– Despite this disaster, because of everyone else losing last night Celts are still the 3 seed so suck it.

– Man where to start. Well, I suppose the shooting is as good as place as any. Quite frankly, the Celtics couldn’t. A stellar 37% for the game might look awful on it’s own, but when you look deeper it’s even more frustrating. For example, the Celts actually shot better when their shots were contested (41.7%) than when they were wide open and uncontested (28.6%). This was a case of just not being able to hit an open shot. Jonas was 0-3, Sully 0-4, Isaiah 1-3, and Bradley 2-6 in such scenarios. In fact, pretty much only Crowder was able to hit a fucking open shot.

– Defensively, the Celtics need to just burn this tape. The Celts have fallen into a habit of giving up a shit ton of points, and last night was no different. Another team over 100. In fact, there has just been one game all month in which the Celtics held a team to under 100 points and that was the lowly Knicks who just lost to fucking Brooklyn (but keep that pick guys!).

Against Utah, they just played lazy. Allowing a team to shoot 54.4% (avg 44% 18th in L) from the floor, and 44% from deep (avg 35%, 13th) when they are coming off a back to back is just lazy, no other way to put it. After withstanding an opening quarter in which the Jazz would shoot 62% the Celtics could never muster up enough consecutive stops to get back into the game. When the Celts cut it to 11 entering the final frame, they went on to give up 64% shooting in the fourth and that didn’t really work out well for them.

– We can’t talk about defense and not discuss the Celts inability to defend without fouling. I’ve been calling this out for what seems like 2 months, and they just can’t. 31 fouls last night, 44 FTA for the Jazz. And here’s the thing. Normally I’m upset because it’s mostly some trash calls against Lebron and stuff, but last night I can honestly say the refs weren’t the issue. In fact they were bad on both sides. But the Celtics could not stop fouling. In the bonus with 7 min left in the 4th quarter has become the norm. This brings me back to them playing lazy. How many times did we see someone like Zeller or Turner just try and reach and swipe the ball, only hitting 100% skin? I’ve feared these type of mental lapses would cost the Celtics a game, and here we are.

– Make no mistake about it, the Celtics should have been BLOWN out. Utah going 27-44 from the FT line is the only reason this wasn’t worse.

– So whoever still thinks Olynyk is overrated and not an important part of this team, please see yourself out. This is going to be a long 3 weeks. The Celtics really missed his spacing, because without him, Favors/Gobert had no reason to ever leave the paint, and could just sit back and block everything that came their way.

– Yet again, the Celtics were plagued by a third quarter. After being very fortunate to only be down 5 heading into the half, this game was right there for the taking. Instead, we got a 5-17 (29%) performance and three of those buckets came from Isaiah.

For much of the second half, their offense just made no sense. There was no movement, no screens, everyone just stood around, one guy drove to the basket, missed or got blocked, and that was that. They got jump shot happy, and they let their stalled offense impact their defense, which you simply cannot do.

– If you want to point out how important a rim protector is, I won’t argue with you. It was the difference in this game. Utah completely owned the Celtics in the paint and on the glass. This hasn’t really been the case over the last 15 games, but the Celtics haven’t really faced a frontcourt like this. They are damn good and I have no idea how Derrick Favors is just 24. He has been in the NBA no less than 15 years.

– It didn’t matter, but missing 10 FTs and it being your good shooters that missed them, is never ideal.

So look, you can be mad about this loss, but make it more about how they played rather than who they played. Utah is damn good, and will probably end up something like 5th or 6th in the West if they healthy. If I know one thing about this team, it’s that they are going to put this behind them and will come out firing Sunday in Denver. Remember, in order to win 47 you need to lose 35, so I am by no means even getting close to the panic button. I prefer to evaluate this team based on all 56 of their games and when you do that, you see that we have nothing to worry about. 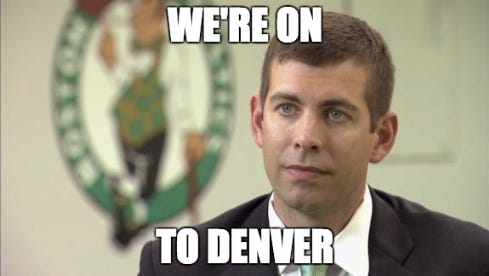 P.S. Also, I’m skeptical that this mystery team was really PHI and Okafor. Partly because there is NO chance PHI turns down that Nets pick, no matter where it ends up. Those guys love draft picks more than I love anything in my life. Factor in the big men they already have, I can’t see Hinkie/Colengelo getting cold feet with it. Nope, not buying it.